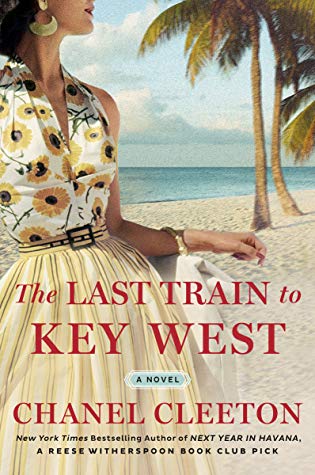 The Last Train to Key West by Chanel Cleeton
Genres: Historical Fiction
Publication date: June 16, 2020
Publisher: Berkley
Format: eARC, 320 pages
How I got it: From the publisher
Add it: Goodreads
Buy it: Amazon | Your local indie bookstore
My rating:

Everyone journeys to Key West searching for something. For the tourists traveling on Henry Flagler’s legendary Overseas Railroad, Labor Day weekend is an opportunity to forget the economic depression gripping the nation. But one person’s paradise can be another’s prison, and Key West-native Helen Berner yearns to escape.

The Cuban Revolution of 1933 left Mirta Perez’s family in a precarious position. After an arranged wedding in Havana, Mirta arrives in the Keys on her honeymoon. While she can’t deny the growing attraction to the stranger she’s married, her new husband’s illicit business interests may threaten not only her relationship, but her life.

Elizabeth Preston's trip from New York to Key West is a chance to save her once-wealthy family from their troubles as a result of the Wall Street crash. Her quest takes her to the camps occupied by veterans of the Great War and pairs her with an unlikely ally on a treacherous hunt of his own.

Over the course of the holiday weekend, the women’s paths cross unexpectedly, and the danger swirling around them is matched only by the terrifying force of the deadly storm threatening the Keys.

When I pick up one of Chanel’s historical fiction books, I find myself sucked right into the world immediately. Her writing paints a vivid picture and I feel as though I’m walking through the streets alongside the characters. Her passion for history and the characters whose stories she’s telling comes through in every single word. In The Last Train to Key West, she weaves the story of three very different women together in an absolutely exquisite way.

The backdrop for this book is the Labor Day holiday weekend of 1935. History has never been my strong suit so I didn’t know this going in, but the hurricane that devastated the Florida Keys that weekend is one of the strongest Atlantic hurricanes on record. If I’d been aware, I’d likely have been more prepared for just how intense this book was at times. I was quite literally on the edge of my seat waiting to see how things would go for Helen, Mirta and Elizabeth. I was equally invested in each of their lives (and loves) and I couldn’t get enough.

If you’re a romance reader who is thinking about branching out into historical fiction, I can’t recommend Chanel’s books highly enough. While Next Year in Havana, When We Left Cuba and The Last Train to Key West are all standalones, I’d still suggest reading all of them in order. If you’re an audio reader, the audios are fantastic. Or at least the two I’ve listened to have been. I’m going to need to reread this book soon and I plan to do it via audiobook. Chanel’s words, characters and world-building are like no other.

Leaving seems impossible when you’re walking away from all you’ve known, when the stakes are life and death.

“The running of this world is left to men, and quite frankly, I’m not impressed with what they’ve done with it.”

“I hate to tell you, but there’s no such thing as a ‘right time’ in life. Things happen when they need to happen. The rest sort of falls into place.”

“There’s so much broken around us; maybe all we can do is try to fix each other, do what we can to preserve these precious moments in a world where there is so much sadness and loss.”

Have you read any of Chanel’s historical fiction books?
Do you plan to read The Last Train to Key West?