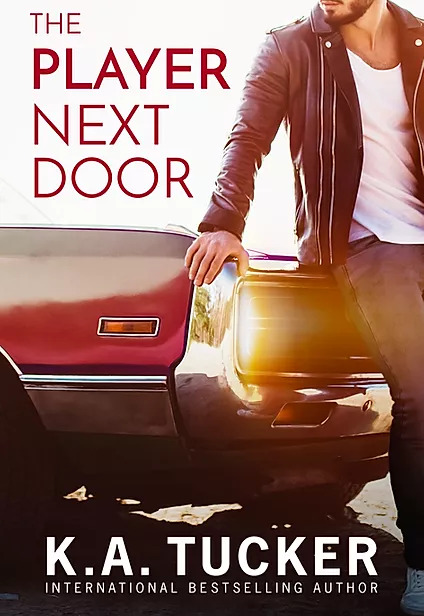 The Player Next Door by K.A. Tucker
Genres: Contemporary, Romance
Publication date: June 14, 2020
Publisher: Self-Published
Format: eARC, 431 pages
How I got it: From the author
Add it: Goodreads
Buy it: Amazon
My rating:

Scarlet Reed has returned to Polson Falls, convinced that twelve years away is long enough to shed her humiliating childhood identity as the town harlot's daughter. With a teaching job secured and an adorable fixer-upper to call home, things in her life are finally looking up.

That is, until she finds out that Shane Beckett lives next door.

Shane Beckett, the handsome and charismatic high school star quarterback who smashed her heart. The lying, cheating player who was supposed to be long gone, living the pro football dream and fooling women into thinking he's Prince Charming. Shane Beckett, who is as attractive as ever and flashing his dimples at her as if he has done no wrong.

Scarlet makes it abundantly clear that old wounds have not been forgotten. Neighbors they may be, but friends they most certainly are not. She won't allow herself to fall for the single father and firefighter again, no matter how many apologies he offers, how many times he rushes to her aid, or how hard he makes her heart pound.

But as she spends more time with him, she begins to fear that maybe she's wrong. Maybe Shane has changed.

And maybe this time she's the one playing herself—out of a chance at true happiness.

If you’ve followed me for any length of time, you know second chance romance is my jam. It’s one of my favorite tropes and I literally can’t get enough of it. I’ll devour just about anything K.A. Tucker writes, but I was especially over the moon to learn she was writing The Player Next Door. It sounded like it would be right up my alley.

Sometimes when I read a second chance romance, the reason why the couple broke up in the first place is a bit of a mystery. I learned right off the bat — literally in the first chapter — what went down between Scarlet and Shane. It wasn’t pretty and it didn’t do much to endear Shane to me. But, they were in high school and heavens knows poor choices are made. When we fast forward a few years and find Scarlet and Shane as neighbors, they both have some baggage to work through. I knew it would be a bumpy road for these characters given their past, but their chemistry convinced me they could make it work. But first, they had to be honest with themselves and communicate better. There was a lot of pettiness between them and they sometimes came off as much younger than their ages.

I breezed through The Player Next Door in a mere matter of hours — again, something I haven’t been doing much over the last few months. While I did get frustrated with how childish they could be at times, I was all in for Scarlet and Shane. I hoped they could let go of some past ugliness, get through the challenges of external forces in the present-day, and make it work. It was an enjoyable read — light, fun and super sexy, with just enough drama to make it believable. I’d like to see Kathleen take us back into this world at some point. There are some side characters whom I think could have interesting stories of their own. I’ll just keep my fingers crossed.

“There’s not much I can say except that I’m sorry. If I could go back in time, I’d do a lot of things differently.”

Do you like second chance romances?
Is The Player Next Door on your TBR?