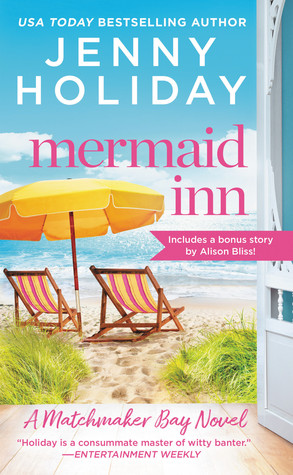 Eve Abbott has a problem--actually, make that a lot of problems. And they're all going to get worse the moment her toes hit the sand in Matchmaker Bay. Once a blissful summer escape, the tiny town now just reminds Eve of loss. Inheriting her aunt's beloved Mermaid Inn is the only reason Eve is coming back. She's definitely not ready to handle nosy neighbors, extensive renovations, or the discovery that a certain heartbreaker still lives down the street...

Police Chief Sawyer Collins always does the right thing, even when it costs him everything...like Evie. He's spent the past ten years trying to forget her--to forget how right she felt in his arms, to forget the pain in her eyes the day she left. The last thing he expects is to see her back in town or to find that the spark between them is as strong as ever. Sawyer knows this is his only chance to prove that his feelings have always been real...before Eve turns tail and leaves for good.

I fell in love with Jenny Holiday’s writing while reading her Bridesmaids Behaving Badly series. When I saw she was launching a new series with a small-town beach setting, I was all in. As soon as I learned the first book, Mermaid Inn, was a second chance romance, I was even more excited. I didn’t get to it before release, but I am so happy I read it when I did. Not only was it absolutely delightful, but it also helped break me out of a bit of a book slump.

Y’all know I love the second chance romance trope. But I’m also seriously picky about my second chance romances. I need to know the “why” and it has to make sense. Even if it’s not necessarily pretty or a reason I can support. When the characters are face-to-face again, I want to see that chemistry. And I want at least a little bit of a grovel. The size of the grovel I desire is based on what went down previously. But, I digress. Eve and Sawyer gave good second chance romance in Mermaid Inn. It checked all my boxes.

Honestly, everything about Mermaid Inn was flat-out wonderful. I was super invested in Eve and Sawyer’s story. I was totally enamored with the small beach town — and the Inn itself! — and its nosy, meddling residents. I swooned my way through this book with a big cheesy grin on my face. (Hello, Sawyer builds Eve a Little Free Library! 😍) The Matchmaker Bay series is off to a strong start and I can’t wait for more!

I really enjoyed the audio for Mermaid Inn, too. Meghan Kelly is a new-to-me author and I thought she did a great job bringing Eve, Sawyer, and the other characters to life. The bottom line is I think this book would be enjoyable no matter how you read it, but if you’re an audiobook fan it’s absolutely worth a listen.

Have you read Mermaid Inn?
If not, is it on your TBR?