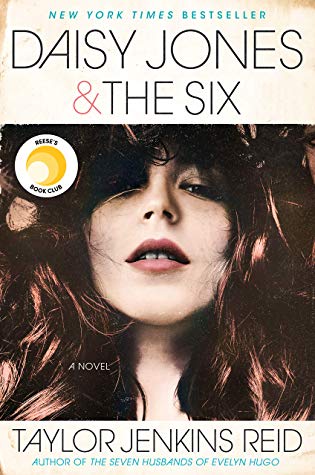 Everyone knows Daisy Jones & The Six, but nobody knows the reason behind their split at the absolute height of their popularity . . . until now.

Daisy is a girl coming of age in L.A. in the late sixties, sneaking into clubs on the Sunset Strip, sleeping with rock stars, and dreaming of singing at the Whisky a Go Go. The sex and drugs are thrilling, but it’s the rock and roll she loves most. By the time she’s twenty, her voice is getting noticed, and she has the kind of heedless beauty that makes people do crazy things.

Also getting noticed is The Six, a band led by the brooding Billy Dunne. On the eve of their first tour, his girlfriend Camila finds out she’s pregnant, and with the pressure of impending fatherhood and fame, Billy goes a little wild on the road.

Daisy and Billy cross paths when a producer realizes that the key to supercharged success is to put the two together. What happens next will become the stuff of legend.

The making of that legend is chronicled in this riveting and unforgettable novel, written as an oral history of one of the biggest bands of the seventies. Taylor Jenkins Reid is a talented writer who takes her work to a new level with Daisy Jones & The Six, brilliantly capturing a place and time in an utterly distinctive voice.

On the surface, Daisy Jones and the Six is about as far from being a “Kim book” as you can possibly get. I mostly read romance and this book isn’t that. I’m not really all that interested in documentaries or rock bands. I’ve never been one to sit around watching VH1 Behind the Music. (Is that still a thing? I honestly wouldn’t know.) I’d seen all the glowing reviews for it, but I set it aside when I tried to read it before release. It wasn’t a DNF, but I just wasn’t into it at that moment. It honestly wasn’t until a friend recommended it for the 12 reads, 12 friends challenge that I decided to finally pick it up. But this time I went with the audio since I’d heard so much praise for it. I was hooked within the first few minutes and I never did look back.

This is one of those instances where even weeks after reading I’m not really sure how to put my thoughts into coherent sentences. Let alone sentences that will do this incredible story any justice whatsoever. But it also doesn’t feel right to NOT review the book, so here we are. I’m going to keep my review as spoiler-free as possible because I really feel you’re best going into this book totally blind. It’s best to ride the wave and just experience it, preferably on audio. I’m sure it’s a great book no matter how you read it, but now that I’ve listened to the audio, I can’t imagine it any other way.

What makes this audiobook so special? It’s full-cast. And even better? It’s full-cast with actors you’ve probably heard of before. I listen to a lot of audiobooks. I have loved a lot of audiobooks, but I’ve never listened to one that’s as much of an experience as Daisy Jones and the Six is. The only books to come close are the Harry Potter audiobooks and, as much as I love them, they’re still not like this. I was entirely immersed in the story. It was like I was listening to a documentary. I was obsessed.

Don’t go looking for a bunch of relatable and likable characters in Daisy Jones and the Six. You really won’t find them. Or at least I didn’t. But that said, the characters were rich and multi-dimensional. They had good qualities. They also had not-so-good qualities. But man, do they find a way under your skin. This is a gritty book. I mean, it’s sex, drugs, and rock ‘n’ roll in the 1970s. I wouldn’t expect anything less. It was fascinating. Not my usual jam, but fascinating none the less. It’s full of twists and turns. I didn’t see a lot of it coming. And I certainly didn’t realize how invested I was in this story and these characters until I was full-on sobbing in the last 30 or so minutes.

If you’ve been on the fence about whether you want to read Daisy Jones and the Six, give it a try. Even if you’re a mostly romance reader like myself. You’re not going to get that with this book, but you will get a gripping and unforgettable story. It’s easily one of my favorite books of the year and I suspect I’ll listen to it several more times.

“There’s just as much to hate about you as there is to like about you and that’s annoying.”

“And no matter where we are, no matter what time of day it is, the world is dark and we are two blinking lights. Flashing at the same time. Neither one of us is flashing alone.”

Taylor Jenkins Reid is an author and essayist from Acton, Massachusetts. Her first novel, Forever, Interrupted, was named one of the "11 Debuts We Love" by Kirkus Reviews. She lives in Los Angeles with her husband, Alex, and their dog, Rabbit.

Have you read Daisy Jones and the Six?
What’d you think?
If you’ve not read it, is it on your TBR?