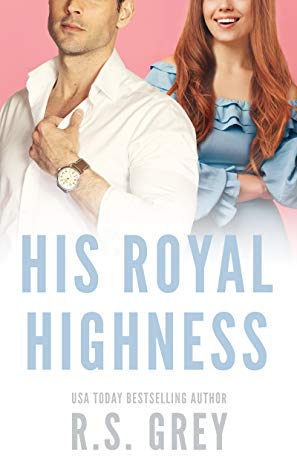 His Royal Highness by R.S. Grey
Genres: Adult, Contemporary, Romance
Publication date: November 14, 2019
Publisher: Self-Published
Format: eARC, 326 pages
How I got it: From the author
Add it: Goodreads
Buy it: Amazon
My rating:
Heat level:

But the day he walks back into my life, I realize there are two things time has yet to soften: my feelings for him and his chiseled jawline.

It’s infuriating that my heart still races when he walks into a room. I refuse to fall prey to old unrequited love, so I decide the less I’m around him, the better. Avoidance is key.

Unfortunately, Derek isn’t going to make it easy. As a teenager, I would have crawled on my hands and knees to attract his attention. Now I can’t seem to escape it.

I’m not sure why he’s bothering. He’s not just out of my league—he’s out of my tax bracket. As the sole heir to the Knightley Company, he’s as close to American royalty as you can get. As for me, I’m just a part-time princess at Knightley’s flagship magical theme park.

I spend my days playing make-believe, but Derek has no use for fairytales. His unwavering confidence makes it clear he thinks I’ll surrender in the end.

His Royal Highness always gets what he wants.
And he wants me.

My queen of rom coms has done it again! His Royal Highness is an absolute gem. The setting, the characters, everything about it was magical.

This might seem like a weird time to confess I’ve never been to Disney, but there you have it. (I’ve also not ever been all that interested in going. Don’t at me. 😂) I can still get behind the idea of a romance set between the characters of a Disney-esque theme park though. And boy, did I ever love this one. Does it help that it’s a second chance romance that started with an unrequited schoolgirl crush on her mentor? And that it comes with some groveling and a wonderful slow burn? Heck yes. I was all in on Whitney, Derek and all things Fairtytale Kingdom.

His Royal Highness was the latest in a long list of Rachel’s books that I’ve found utterly charming. I loved Whitney, and Derek turned out to be much swoonier than I anticipated from the blurb. This book had me giggling and grinning like a fool while I read, which is exactly what I expect from a great rom com. Rachel paints a vivid picture and I felt like I was right there with all the characters, both In Character and not, the entire time. If you’re looking for a funny and sweet second chance romance with a bit of spice and some feels, look no further.

I don’t know how a soul finds its mate, why it seemed like mine had latched onto someone who was the least logical choice. All I know is it’s been eight years and I’m still not over my silly crush on Derek Knightley. But hopefully, I will be soon.

I’m going to accept my fate as Fairytale Kingdom’s new prince, and Whitney will be my princess. We’ll work on the happily ever after part come Monday.

I can’t go on. This week has lasted four hundred years. I’m barely sleeping. Caffeine has lost its effect on me.

Derek has always sat heavy in my heart like a jagged piece of shrapnel, the cost of removal always outweighing the pain of letting him stay.

Have you read any of R.S. Grey’s books?
What’s your fave?
Is His Royal Highness on your TBR?