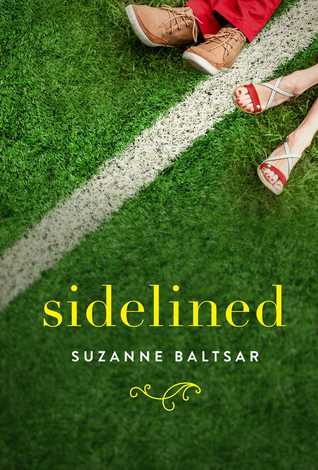 When Connor McGuire loses out on his dream job of being the head coach of the local high school football team, he thinks life can’t get any worse. Then he discovers just who got the coveted position—it was a handout to the kid of a well-known, successful college coach. Connor’s sure this is just a publicity stunt, but the kid turns out to be not only a sharp strategist, but a driven and sexy young woman, too. Frustrated in more ways than one, Connor realizes that he might have to step up his game or risk losing altogether.

Coach Charlotte “Charlie” Gibb calls a flag on the play when she finds out that her very male, very attractive, but definitely-rooting-for-her-to-lose assistant coach resents her for taking what he considers to be his rightful position. But never one to back down from a little healthy competition, Charlie is determined to prove her worth—both on and off the field.

I found Sidelined intriguing since I first read the blurb. A female head football coach in an antagonistic enemies to lovers romance with the man she beat out for the job? Come on, that has my name written all over it. It gave me a nice mix of football, feminism and feels.

Sidelined was a quiet romance. It wasn’t exactly a slow burn, but things between Charlie and Connor built slowly. There wasn’t a lot of on the page heat, but what it lacked in sexy times it made up for in character development. I have to say, though, I didn’t always love Charlie or Connor. It was difficult to get a read on each of them at times and I had a tough time understanding their motivations. But something about them together just seemed right though, even if they were better at pushing each other’s buttons than opening up to each other and confronting their feelings. As frustrating as I found the way they danced around each other at times, I couldn’t help but root for them. Thankfully they got it together before it was all said and done, so I got the swoony feels I needed from their story.

I particularly appreciated the take on traditional gender roles and the strength of Charlie’s character. It takes a strong woman to put up with the misogyny she did and not roll over. I think it’s something that a lot of readers will find relatable. Even if what they deal with doesn’t occur on a football field. I know I sure did. I’m all for female empowerment – in and out of the bedroom – in my books, so I really connected with that storyline. Sidelined was my first Suzanne Baltsar book, but it won’t be my last. I can’t wait to see what she gives us next, but in the meantime I’m going to check out her backlist.

“I’ve already heard all the whispered rumors and passive-aggressive insults, so if you have an issue with the fact that I wear a bra instead of a jockstrap, you can come to me directly. I have no tolerance for bullshit.”

Romantic adult relationships should come with a warning—nobody talked about the hazards of those the way they did about smoking.

Suzanne’s storied history in literature began when she was first published in the 5th Grade Poetry Anthology of 1997 with a poem titled Snowy Day in May. She continued her career with a much lauded Angelfire website featuring multiple novels of *NSYNC fanfiction. School, boys, and eventual full-time jobs got in the way here and there, but she kept on writing, including a screenplay which she directed to bring to the big screen in 2013. These days she writes stories about life, love, and bringing down the patriarchy in between wrangling a few beasts, some human, some not.

Have you read Sidelined?
If not, is it on your TBR?