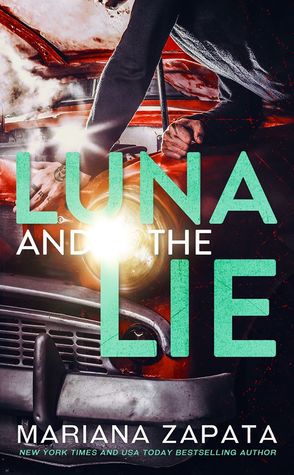 The problem with secrets is that they’re too easy to keep collecting.

Luna Allen has done some things she would rather no one ever know about. She also knows that, if she could go back in time, she wouldn’t change a single thing.

With three sisters she loves, a job she (mostly) adores, and a family built up of friends she’s made over the years, Luna figures everything has worked out the way it was supposed to.

But when one of those secrets involves the man who signs her paycheck, she can’t find it in her to regret it. Despite the fact that he’s not the friendliest man in the world. Or the most patient.

Sometimes there are things you’re better off keeping to yourself.

By now you all know Mariana Zapata is one of my favorite authors and definitely my most reread author, right? If you don’t, you probably haven’t been paying much attention. I’m not shy about it. ? I read Luna and the Lie for the first time immediately after it was released. In fact I dropped everything to devour it, as is customary when she releases a new book. I knew I would reread once it was released on audio, too. I loved it the first time, and possibly even more the second.

Mariana’s characters are always wonderful and complex. Luna and Rip are the latest in a long list of my favorites. I adored Luna. I also felt super protective of her, as I often do when characters I love are being mistreated. She had such a good heart and took such good care of those she loved. Why wouldn’t they want to do the same for her? Her family was the actual worst. The way they treated her made my heart ache more than once. But, she was strong enough to get through it. No doormat heroine here, friends.

Rip was a tough nut to crack, but I really ended up loving him before it was all said and done. I’ll admit I side-eyed him more than once, but he had his own issues he was dealing with. He was a big softie under that hard exterior. He and Luna were so damn good together. I loved the progression from kinda-friends/coworkers to friends to more. The pacing of their relationship was perfect and it gave me a chance to get to know both of them.

I’d be remiss if I didn’t mention the awesomeness of the narrators in my review. If you’ve ever listened to any of Mariana’s books, you know Callie Dalton is amazing. Gomez Pugh is a new-to-me narrator and OMG I am in love. I can’t imagine a more perfect Rip. His gruff, gravelly voice was absolutely perfect. Luna and the Lie is the second (I think) of Mariana’s books to have duet narration. Y’all, it just makes the story come alive.

Luna and the Lie is every bit as wonderful as the rest of Mariana’s books. And I know I’ll listen to it over and over again just as I do the others. MZ rereads are my go-to when I’m in a book slump, a general funk or while I’m waiting for her next release. Her stories never get old. I find something new to love about them every single time I reread. And those slow burns? I basically live for them.

The heart is more resilient than anyone ever gave it credit for, and I liked to think mine was a bad bish.

You can’t make anyone love you or care about you. I knew that better than anyone.

“You gave me these pieces of you I know you haven’t given to anybody else, and they’re mine. You can’t take ’em back. I need them more than you do, you hear me?”

I was a goner. I was such a goner that no one was ever going to find me again. Ever.

Have you read any of Mariana Zapata’s books?
What’s your favorite?