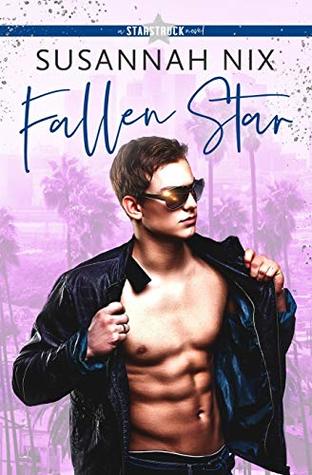 Grace knows better than to fall for a Hollywood bad boy like Scott Deacon. An arrogant movie star with a troubled past and a big honking chip on his shoulder? No, thank you. He may be sex on wheels, but beneath the charming facade he’s just another cocky jackass destined to make her job more difficult.

The more time they spend together, the hotter the fire between them burns. With every flirtatious smile and brush of his hand, she feels her defenses crumbling.

She wants to hate him, but instead she’s in danger of losing all control.

Fallen Star was unputdownable and absolutely wonderful. I adored Grace. I swooned over Scott. And I loved that the book was set in New Orleans, a city I just visited a little over a month ago. All the scenes — as well as the tastes — were fresh in my mind as I read and I felt like I was right back there again. I also wished I was right back there again to have some beignets and café au laits from Cafe Du Monde. Hello, food cravings. I might have to go in search of DC’s version of beignets soon, even though they won’t be the same. But, I digress.

Though Fallen Star touches on some heavy issues at times, it was never overwhelming. And, for the most part, I cheesy-grinned my way through it while falling in love with Grace and Scott. I enjoyed the delightful slow burn while they got to know each other and as things developed between them. I think it was especially sweet and satisfying since they had a pretty rocky start. Grace had been burned in the past and sworn off actors as a result. Scott was an actor — so strike one — but also a recovering addict who had a bit of an attitude problem. Yet, somehow it all worked. More than worked, actually. Their story gave me all kinds of feels.

You don’t need to read Rising Star to enjoy Fallen Star, but I’d still suggest going back and reading it at some point. It’s a great read. I’m totally loving this series and can’t wait to see what’s next for it and Susannah!

“I’m done dating actors. Actors are like toddlers, only with bulging biceps and winning smiles and abs you can grate cheese on. But still: toddlers. They are not relationship material.”

“You taste even better than I imagined.”

This thing between them wasn’t a dream, and it wasn’t a fantasy. It was scary and imperfect and wonderful.

Susannah Nix lives in Texas with her husband, two ornery cats, and a flatulent pit bull. When she’s not writing, she enjoys reading, cooking, knitting, watching stupid amounts of television, and getting distracted by Tumblr. She is also a powerlifter who can deadlift as much as Captain America weighs.

Have you read any of Susannah’s books?
Any faves?