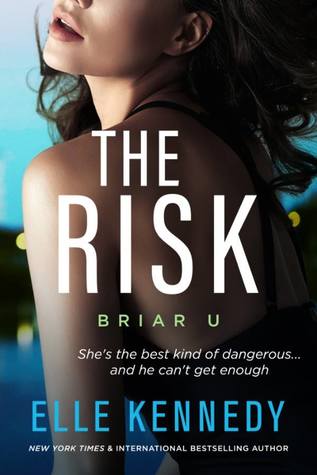 The Risk by Elle Kennedy
Series: Briar U #2
Genres: New Adult, Contemporary, Romance
Publication date: February 18, 2019
Publisher: Self-Published
Format: eARC, 432 pages
How I got it: From the author
Add it: Goodreads
Buy it: Amazon
My rating:

Everyone says I’m a bad girl. They’re only partly right—I don’t let fear rule me, and I certainly don’t care what people think. But I draw the line at sleeping with the enemy. As the daughter of Briar’s head hockey coach, I’d be vilified if I hooked up with a player from a rival team.

And that’s who Jake Connelly is. Harvard’s star forward is arrogant, annoying, and too attractive for his own good. But fate is cruel—I require his help to secure a much-coveted internship, and the sexy jerk isn’t making it easy for me.

I need Connelly to be my fake boyfriend.

For every fake date…he wants a real one.

Which means this bad girl is in big trouble. Nothing good can come from sneaking around with Jake Connelly. My father would kill me, my friends will revolt, and my post-college career is on the line. But while it’s getting harder and harder to resist Jake’s oozing sex appeal and cocky grin, I refuse to fall for him.

That’s the one risk I’m not willing to take.

I’ve basically been waiting for The Risk since I finished The Chase last fall. I loved Brenna’s sassy self and I just couldn’t wait to see who she would be paired up with. Of course, I hoped it would be Jake Connelly all along, so I wasn’t disappointed. Their banter and chemistry was fantastic in The Chase and I wanted to see what might develop between them. Their story was everything I wanted and more!

There’s something totally addictive about Elle’s books, no matter the series or genre. Once I start reading, I don’t want to stop. That was definitely the case with Brenna and Jake in The Risk. These two put off seriously strong “I hate you but could totally love you” vibes in The Chase. I was thrilled when I realized they were being paired up in The Risk. Brenna was a badass, but with some vulnerabilities underneath. Jake was super swoony and sexy. I loved their banter. They both gave as good as they got and the pairing was perfect, if a bit forbidden. Or, at least discouraged.

I loved the progression of their relationship in The Risk. And as much as I loved the romance, I enjoyed the friendships between the characters just as much. Whether Jake and his teammates or Brenna and Summer, or some combination of all of these, I loved it. More friendships like these in books, please! I’m here for both the bromance and the authentic female friendships. There was more than one scene that had me literally laughing out loud — the Bubble Butt one was one of them — and I couldn’t get enough.

I’m not a big hockey fan. I’ve tried, but it will never replace football as #1 in my heart. If I knew more about it, it’d probably be a different story. But, I digress. I still love the hell out of hockey romance books. (And most sports romance, tbh.) Especially when the sports are more than just “oh so and so plays ____” and then it has no impact on the story at all. That wasn’t the case here. Hockey is a big part of the storyline and I’m not exaggerating when I say I was on the edge of my seat more than once during a hockey scene. ?

I loved Elle’s Off Campus series and I’m digging Briar U just as hard. It keeps getting better and I just can’t wait to see what’s next. If it has the combination of laughs, sexy times, swoons and feels that The Risk had, it’ll be the latest in a long list of favorites from Elle.

Anyone can give me an orgasm, but not everyone can touch my soul. One kiss can make me fall in love with someone. I know it, because it happened once before. And that’s why kissing scares me sometimes.

“Since I met you, you’re all I think about. I’m fucking smitten.”

Do you have a fave Elle Kennedy book?

One response to “In Review: The Risk (Briar U #2) by Elle Kennedy”