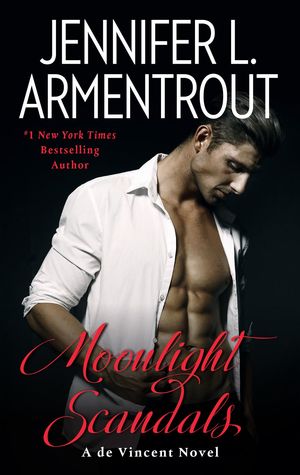 Even a ghost hunter like Rosie Herpin couldn’t have foreseen the fateful meeting between two mourners that has brought her so intimately close to the notorious and seductive Devlin de Vincent. Everyone in New Orleans knows he’s heir to a dark family curse that both frightens and enthralls. To the locals, Devlin is the devil. To Rosie, he’s a man who’s stoking her wildest fantasies. When a brutal attack on her friend is linked to the de Vincents, he becomes a mystery she may be risking her life to solve.

Devlin knows what he wants from this sexy and adventurous woman. But what does Rosie want from him? It’s a question that becomes more pressing—and more dangerous—when he suspects her of prying into the shadows of his past.

Now, the legends surrounding the de Vincents may not be myths at all. But if she’s to discover the truth, she must follow them straight into the arms of the man she can’t resist—the handsome devil himself.

Y’all Moonlight Scandals was AHHHHHMAZING. I’ve been a big fan of JLA’s de Vincent series since I first read Moonlight Sins. I loved the setting and getting to learn more about the mysterious de Vincents with each new book, getting some answers while new questions were raised. I’ve been waiting for Devlin’s story since the very beginning and it was everything I wanted and more.

Oh, Devlin. He was totally worth waiting for and he’s my favorite of the bunch. There was so much MORE to him than met the eye. I loved reading along as Rosie peeled back his layers. Rosie was pretty darn amazing in her own right. She didn’t pull any punches or take any crap from anyone, Devlin included. She spoke her mind and I really just enjoyed her outlook on things. I loved the progression of the relationship between Rosie and Devlin, too. They had wickedly hot chemistry and I thought my iPad might explode during a couple scenes. (Devlin’s deliciously filthy mouth played a part in that, too. *fans self*)

Of course, some of the best parts of Moonlight Scandals are things I can’t talk about in my review. I refuse to spoil anything for you. But man, did everything come full circle during this book. My questions were answered and I was on the absolute edge of my seat more than once. If you’ve been reading this series from the beginning, I think you’ll really enjoy this final installment. I’ll read anything and everything Jen writes (and 99% of the time I love it), but this is some of her best work yet. I loved getting immersed in all things NOLA and the de Vincents.

The only two devils Rosie sort of knew were the perfectly sugared beignets that were to blame for her rounded hips and a de Vincent.

“That takes longer than I’m betting you can last and you’d be begging me to stop while pleading with me to keep going the whole time.”

“You’re not just anything. That’s the biggest lie you’ve told so far.”

The taste of him and the taste of her mingling on their tongues did something to her. It was like being drunk. It was like falling underwater and holding yourself there until your lungs burned and your vision dotted. It was being consumed by blinding lust and there was no sense, no will, no end.

Have you discovered the de Vincents?