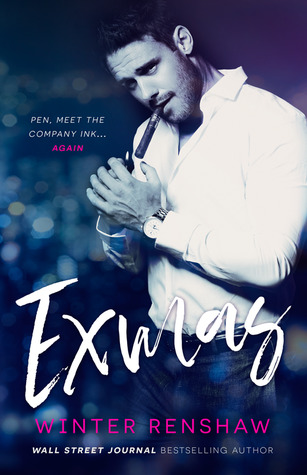 Let me first say: Reed York was never my boyfriend. He was the pen. I was the company ink. Though if you want to get technical, we were more like colleagues-who-hated-each-other … with benefits.

Everything was fine until the charming jerk went behind my back, stole my promotion, and became my boss—literally overnight.

Refusing to work beneath him (professionally speaking and otherwise), I transferred 2,014 miles away to our Chicago division, and I’ve spent the past year trying to remember how much I hated his panty-melting smirk so I can forget how much I secretly loved the way his ocean eyes lit every time I walked into the room.

But he’s just announced a last-minute site visit the week between Christmas and New Year’s Day, and on top of that, he’s audaciously designated me as his ‘right hand gal’ during his visit. If he thinks he has a snowball’s chance in this hell at getting back in my good graces, he’s got another thing coming.

Reed York might be a man used to getting everything he’s ever wanted, but Joa Jolivet is a woman that never forgets.

He can put me on his Christmas list all he wants, but everyone knows naughty boys only get coal.

Is anyone else in “read all the holiday romance” mode or is it just me? Since the first snow of the year, right before Thanksgiving, I’ve been in the mood. So, I decided there was no need to fight it and promptly began knocking books off my TBR. Exmas was a newer addition to my TBR, but I’ve wanted to read it since I first read the blurb. It so did not disappoint. In fact, once I started reading it, I couldn’t put it down.

I found Exmas to be a really fun holiday romance. I’m a sucker for a good second chance romance and when done right, I thoroughly enjoy an office romance as well. Joa and Reed’s story was fun and sexy. I really liked how it was told not only in alternating perspectives from both characters, but how it went back and forth between past and present day. I think it’s an engaging way to learn a couple’s backstory while they get to know each other again. There was a great twist I never saw coming and I love when a book takes me by surprise.

It was surprisingly easy for me to get behind the idea of a reconciliation between Joa and Reed without even knowing the full extent of the misunderstanding that split them up before. I really liked both characters separately and together they were even better. Loved their chemistry and the bit of a slow burn between them. Joa was strong, smart and could seriously hold a grudge. There was far more to Reed than met the eye and I liked seeing layers peeled back. Plus, I adored Joa’s meddlesome family. I could totally see my parents unknowingly putting me in the same situation hers put her, so the story was relatable.

Exmas was delightful. It was sexy and had its fair share of feels. It was romantic and I love how everything wrapped up. There were definite swoons. This was my first Winter Renshaw book, but it won’t be my last. I really enjoyed her writing and I’m looking forward to tackling her backlist very soon.

I’m not sure who I hate more: him for hurting me a year ago and weaseling his way back into my life? Or me for letting it happen after I promised myself it wouldn’t.

Looking back, label or no label, we were in a relationship the entire time. I was hers. She was mine. Even if we were both too stubborn and pigheaded to admit it.

Wall Street Journal and #1 Amazon bestselling author Winter Renshaw is a bona fide daydream believer. She lives somewhere in the middle of the USA and can rarely be seen without her notebook and laptop. When she's not writing, she's thinking about writing. And when she's not thinking about writing, she's living the American dream with her husband, three kids, the laziest puggle this side of the Mississippi, and a busy pug pup that officially owes her three pairs of shoes, one lamp cord, and an office chair.

Who are some of your favorite new-to-you authors?