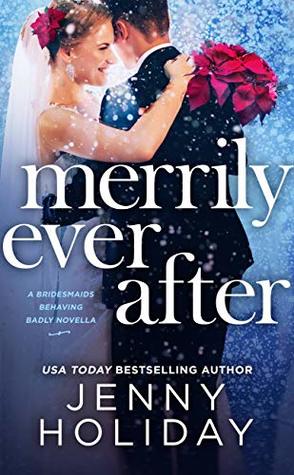 Elise Maxwell is loving her first Christmas with her husband, Jay Smith. So far, newlywed life has been filled with laughter and lots of steamy marital "bliss." But when Elise discovers she's accidentally, against-all-odds pregnant, happily-ever-after screeches to a halt. Although she sees it as a Christmas miracle, Elise knows her new husband might not agree...

Jay never wanted to be a father. In fact, he's avoided it his entire life, worried he'd repeat the patterns of his own messed-up childhood. He's madly in love with Elise and, until now, he thought they were on the same page about not having children. But her surprise pregnancy changes everything. Elise is suddenly committed to parenthood, and Jay knows he can't lose her. Facing his deepest fears will be difficult, but with a little holiday magic, Jay might be able to prove to Elise that - as a family - they're destined to live merrily ever after.

Jenny Holiday’s Bridesmaids Behaving Badly series is one of my favorite finds of 2018. Obviously I was thrilled when I found out she would be releasing a holiday novella in the series. Better yet? Merrily Ever After features the couple whose wedding in the first book kicked off this whole ride. I was so excited to get a glimpse at Elise and Jay’s life together.

Merrily Ever After isn’t all light and fluffy fun and games, but it’s a realistic look at what happens after the HEA. Just a few months after their wedding, Elise and Jay’s life together has come to a crossroads. Despite believing she was unable to have children, she’s pregnant. Jay didn’t want children. She didn’t think she did either, but now she wants nothing more. Except maybe Jay. The story that results gave me a ton of feels. I was inside these characters lives and honestly felt like I was living in their heads at times. Life might not be perfect, but it certainly feels that way when they’re together.

I was prepared for a bit of a bumpy ride with Merrily Ever After and I certainly got that. But it wasn’t overly angsty or anything. From the fun and sexy times to the more emotional ones, I was all in for Elise and Jay. I felt like I totally understood what each of them was going through and struggling with. I never once doubted they would get the ending they deserved, together. In fact, I think the unplanned pregnancy actually strengthened their relationship. They were so freaking good together. The romance and swoons outweighed the harder times and, of course, I ended up a little teary eyed before it was all said and over.

If you’ve been reading the Bridesmaids Behaving Badly series, you’ll want this one on your TBR. If you’re just a fan of Christmasy romances, you’ll be able to enjoy the story without knowing the backstory. But you should think about checking out the series anyhow. It’s fantastic. Merrily Ever After was a delightful holiday romance and a great addition to a series I’m loving on so hard.

He was perfect. The perfect gentleman and the perfect… not gentleman, as the situation required.

Do you enjoy holiday romances?
What are some of your favorites?