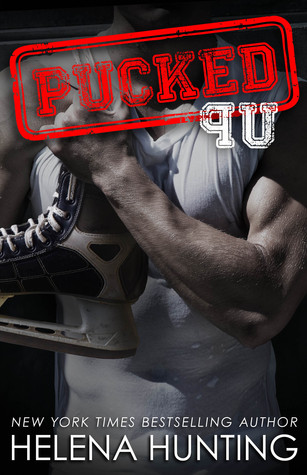 Miller “Buck” Butterson has been banging his way through life ever since a puck to the face fixed his messed up front teeth, and he was drafted into the NHL during his first year of college. After five years of deflecting goals on the ice and scoring them with puck bunnies across the Continental US and parts of Canada, Miller is ready for a girlfriend. A real girlfriend of the non-bunny variety. One he takes on dates and doesn’t jump into bed with after five seconds of conversation.

Miller thinks he’s found that woman in his teammate’s sister. Except, unlike Alex Waters, center, team captain and all round nice guy—who happens to be dating his step-sister—Miller’s manwhore reputation is well earned, and not blown out of proportion by the media. Beyond that minor detail, Miller doesn’t know the first thing about having a girlfriend. But he’s determined to make it happen.

What he doesn’t take into account is the amount of time and effort relationships require, or that constantly letting bunnies take selfies with him to post all over social media isn’t going to win him any points in the boyfriend department. Miller learns—not so quickly—that if he wants to make Sunshine “Sunny” Waters fall for him, he going to have to do a whole lot more than show her his stick skills in the bedroom.

As is often the case when I finish a book that’s been on my TBR for ages, I found myself wondering why I didn’t read Pucked Up sooner. I enjoyed the first book, with its crude humor and fun sexy times. I’m not sure what held me back from jumping into Pucked Up the minute I received it, but here we are. The only good part is that now I can binge the hell out of the series. Can’t be too mad about that!

Though I really enjoyed Pucked Up, I have to admit I struggled a little getting into it at first. I liked Buck, but was a little put off by how crude he was. But mostly I struggled with Sunny. It wasn’t that I didn’t like her, it’s just that I didn’t connect with her at first. I’m not sure if it was the switch over to audio that helped or just that the action picked up, but it took a few chapters before I was totally engrossed in the story. The story ended up being super fun and Buck and Sunny were adorable. Yes there was some drama and angst, but it all worked.

There was a lot more to Buck than met the eye. Yes, he’s more than a little crass, but he’s got a really good heart. He has a less than flattering past, but he’s all in for Sunny and that makes me all melty. I wasn’t sure about her motivations at first, but it didn’t take that long to realize she was all about him, too, but had some serious trust issues. Issues I can’t exactly blame her for given Buck’s past. I enjoyed their chemistry and quieter sweeter moments as much as their seriously hot sexy times.

Lemme just say, I ended up absolutely adoring Buck. His relationship with his sister Vi had me literally laughing out loud. She gives as good as she gets and their banter was freaking hilarious. Also hilarious? The situations Buck found himself in. The spider bite? I laughed until I nearly cried. And also, ouch. His romance with Sunny was quiet, but great. And I loved the secondary storyline where he came into his own and became a really great man.

Kissing is an art. It’s the most important part of foreplay.

Being the provider of the first big “O” gives me some power. It elevates my status. I’m the White Knight in the land of Orgasmia, wielding my magical sword of awesome.

“You can’t control other people’s feelings. All you can do is put yourself out there and hope she’s going to feel the same way.”

There are no refunds and no exchanges with love. It comes with flaws and imperfections. It’s raw, unfiltered, and sometimes it isn’t easy. But I’ve found the best things in life are the ones I’ve had to work hardest for.

What are some of your favorite rom coms?