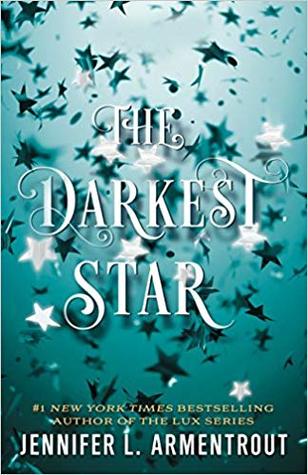 When seventeen-year-old Evie Dasher is caught up in a raid at a notorious club known as one of the few places where humans and the surviving Luxen can mingle freely, she meets Luc, an unnaturally beautiful guy she initially assumes is a Luxen...but he is in fact something much more powerful. Her growing attraction for Luc will lead her deeper and deeper into a world she'd only heard about, a world where everything she thought she knew will be turned on its head...

I loved JLA’s Lux series. When I heard she was going back with The Darkest Star and new Origin series, I was thrilled. I couldn’t get my hands on it soon enough. I couldn’t even binge read it, because I wanted to savor it. Now that I’ve finished, I just want more.

I have to be honest, I find it very difficult to review non-contemporary books because it’s far too easy to give important things away. I’m going to keep my review pretty short and sweet — and vague — because I don’t want to run the risk of that. If you’ve read and enjoyed the Lux series, you will undoubtedly want to read The Darkest Star. That said, I’m also confident those who haven’t read the Lux series could still get into this one. (But they might not be as excited about certain cameos as those of us who read and loved Lux were.)

The Darkest Star has all those things I’ve come to expect from Jen’s books — a great heroine, swoony (even unexpectedly so) hero, sass and sarcasm, humor and plenty of twists and turns. While I was falling for the characters, I was trying to put the pieces together to figure out what was going on. But for real, y’all, no way I was figuring it out on my own this time. The story is SO FREAKING GOOD and the further I got into the story, the harder I found it to savor it. I just wanted answers and kissing and all the good stuff.

The Origin series is off to an amazing start with The Darkest Star. I’m in love with Luc. Evie is pretty amazing in her own right. I have a lot of questions and I’m totally intrigued by the storyline overall. I’m not sure when we’ll get more, but I know I’ll be waiting with grabby hands until I do.

That was what I wanted at some point in my life, for someone to look at me like I looked at tacos.

Deep down I knew that whispered words were going to turn into actions, and things would escalate. Fear would turn to hatred, and that was a deadly combination. The school was a powder keg, and it wasn’t a matter of if it would blow. It was only a matter of when.

“If I had to do it all over, I would. Without a fucking doubt, I would do it again, because the only other option would be that you wouldn’t be standing in front of me—pissed off, but breathing. Alive and so damn beautiful that it sometimes kills me a little each time I look at you.

“There’s nothing we can do other than live with the promise of tomorrow while knowing it may not come.”

Have you read The Darkest Star?
If not, do you plan to?