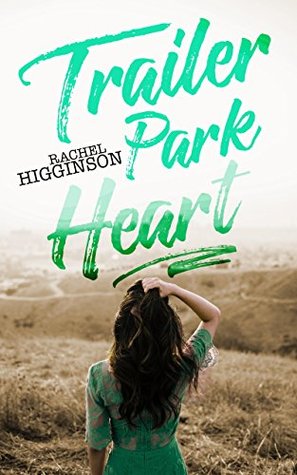 Trailer Park Heart by Rachel Higginson
Genres: Adult, Contemporary, Romance
Publication date: October 23, 2018
Publisher: Self-Published
Format: eARC, 362 pages
How I got it: From the author
Add it: Goodreads
Buy it: Amazon
My rating:

Only legacies have a funny way of sneaking up on you. An innocent decision the night of high school graduation led to a series of complications in my plans to escape.

Until he walks back into town with a chip on his shoulder and a stupid hunch nobody else in town has been smart enough to follow.

Levi Cole is my opposite. Born on the right side of the tracks with family money to spare, he’s the kind of black sheep that can afford to be rebellious—because his family will always pay for his mistakes. He’s also the only living heir to Cole Family Farms, after his brother Logan was killed in duty seven years ago.

He sees something in my life that he thinks he has a right to. But he’s wrong. And obnoxious. And he needs to take his stubborn good looks and that intense way he looks at me and go back to wherever it was he came from.

I’ve been excited about Trailer Park Heart since the moment I saw this gorgeous cover. I love a good single mom story and second chance romance is my jam. I didn’t stand a chance against this book. It grabbed me from the very first few pages and I knew I wasn’t going to get anything done until I finished it. Hooray for the read in one sitting kind of books! I loved this one.

I have to start off by saying Ruby wasn’t always the most likable character. Don’t get me wrong, I didn’t dislike her, I just questioned some of her actions. But, that said, I also don’t blame her for her hangups or all of her actions. Her life was far from easy, but it was good. She was fiercely protective of her son Max, which led her to keep a HUGE secret for years. Somewhat selfish, giving the circumstances? Yes. Understandable? Entirely. Max was the best thing in her life and she didn’t want to lose him as she feared she would if his father’s parents knew about him. Thankfully this wasn’t that kind of story.

Even in those moments when I wanted to basically shake some sense into Ruby for pushing Levi away or continuing to keep crucial information from him, I still admired her strength. The life of a single mother isn’t easy under normal circumstances. These were anything but. She was a complicated character, but I always wanted to see the best happen to her and Max.

Levi-freaking-Cole was basically amazing. I mean, sure he had his jerky moments, but they were usually in response to something Ruby did. They were polar opposites, once friends, often enemies, and fighting some extreme chemistry. Which was more than a little inconvenient for both of them, given the entire situation. Their history was beyond complicated, but I couldn’t help but ship the hell out of them in the present. But man, Levi. He was just so damn swoony. His scenes with Max were perfection for so many reasons. They definitely tugged at my heartstrings.

The small town setting was perfect, and all the little details added so much to this story. Rachel did such a great job tackling the farm town setting. The secondary characters were so spot on, as was the general vibe of the town. Ruby might’ve felt like she was an outsider, but her interactions with the other residents proved she was anything but. I loved watching her open up, accept help and become proud of the life she built. The romance was fantastic, but Ruby’s character development was easily one of my favorite things about this book.

But yes, the romance. Holy feels. I love a good second chance romance. Y’all know it’s one of my favorite tropes. It was done so perfectly here, and under such complicated circumstances. There were so many gorgeous little moments between Ruby and Levi — and, of course, Max — that my heart just felt so very full while reading this book. I love it when the hero is absolutely all in for the heroine and would do anything for her. That’s just part of what made Levi so amazing. Plus, he’s a hot farmer. How can you not love that? Everything about this romance made me all mushy inside. What a beautiful, heartfelt and satisfying story.

It hasn’t taken long for Rachel Higginson to become one of my favorite authors. And to think I hadn’t read her at all until a little over a year ago. I’m anxiously awaiting the next book in her Opposites Attract series. And, you know, whatever else she brings us. She’s been promoted to auto-buy author status for me.

I was a hardworking single mom. I was quiet and sometimes shy and sometimes sassy. I was Ruby Maxine Dawson. I was not, nor would I ever be, trailer trash.

“It has never been easy. There hasn’t been a single day that was easy. I don’t think good things ever are. The hard things make the victory and the success so much better, so much more beautiful.”

“Your son might belong to my brother, Ruby, but you’ve always belonged to me. You’re mine.”

“Forever means forever, Ruby. Might as well get started on it right now.”

Have you read any of Rachel’s books?
What’d you think?