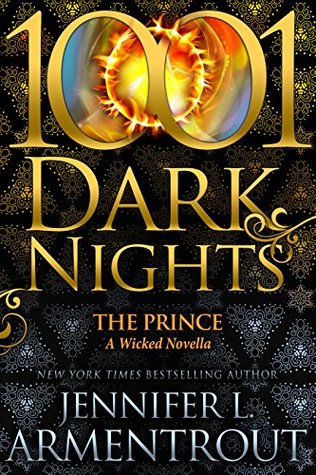 The Prince by Jennifer L. Armentrout
Series: A Wicked Trilogy #3.5
Genres: Adult, Paranormal, Romance
Publication date: August 14, 2018
Publisher: Evil Eye Concepts
Format: eARC, 125 pages
How I got it: From the author
Add it: Goodreads
Buy it: Amazon
My rating:

She’s everything he wants….

Cold. Heartless. Deadly. Whispers of his name alone bring fear to fae and mortals alike. The Prince. There is nothing in the mortal world more dangerous than him. Haunted by a past he couldn’t control, all Caden desires is revenge against those who’d wronged him, trapping him in never-ending nightmare. And there is one person he knows can help him.

She’s everything he can’t have…

Raised within the Order, Brighton Jussier knows just how dangerous the Prince is, reformed or not. She’d seen firsthand what atrocities he could be capable of. The last thing she wants to do is help him, but he leaves her little choice. Forced to work alongside him, she begins to see the man under the bitter ice. Yearning for him feels like the definition of insanity, but there’s no denying the heat in his touch and the wicked promise is his stare.

But there’s someone out there who wants to return the Prince to his former self. A walking, breathing nightmare that is hell bent on destroying the world and everyone close to him. The last thing either of them needs is a distraction, but with the attraction growing between them each now, the one thing he wants more than anything may be the one thing that will be his undoing.

She’s everything he’d die for….

I have so many conflicting feelings when it comes to The Prince and I’m just going to get right to it. There will be spoilers, so if you’ve not yet read and intend to, you probably want to nope out of my review.

I’m an unapologetic fan of Jen’s books. I’ll read pretty much anything she writes, even if it’s a genre that doesn’t typically interest me. I’ve not read a lot of PNR, nor do I plan to if I’m being honest, but I was intrigued by this series when it was first announced. So, I wasted no time reading the first book and loving it. I didn’t keep up with the series as it released, but I did read all the books. It was a great story with great characters and I loved the little world Jen created in New Orleans. Obviously I was excited to see it was going to continue and I was thrilled to get my hands on The Prince early.

I jumped into it just as soon as I finished reading Brave (a little late! whoops!) and I really liked Brighton right from the start. She was sassy and more than a little badass. I loved her banter with Tink because, well, I freaking love Tink. He’s one of my favorite things about this series as a whole and about this book specifically. I was intrigued by Caden and what was happening with him and Bri. They had chemistry for days, but I feel like it was never fully explored. Which, when you’re all about the ship and you read for romance, is a bit disappointing.

Ok, now the spoilers. I’ve always been under the impression the 1,001 Dark Nights novels can live as standalones in the world in which they’re set. So, I was in no way shape or form expecting a cliffhanger in The Prince. If I’m being totally honest, I was disappointed. Not only by the cliffhanger, but by the way things went down in the end. I know there’s a bigger reason for it, but Caden’s behavior towards Bri was really off-putting. Then it was just… over. And there’s a pretty long wait until the next installment.

There was a lot to like about this book. Fans of the series will probably be interested in what happens next. I know I was. It just felt like there was something missing from this for me. I think it was the combination of the slow burn that never really gave way to anything, combined with Caden’s behavior and the unexpected cliffhanger. Now, it’s entirely possible this is a case of “it’s not you, it’s me,” so don’t let my frustrations keep you from enjoying it. I am looking forward to see where the story will go in the next installment. I just greedily wish it wasn’t so far away!

“I rode Dixon in here, like I would ride a mighty steer charging into battle.”

“I went down to Florida with him last September, and I decided after thorough exploration that Florida is the Australia of the United States. That place scares me.”

I wasn’t being a braggy-mc-bragster either. That was the damn truth. That was my job at the Order. The researcher. The reader. The studier. I was the Willow in an army of Buffys and Angels.

“You’re not a ghost. You never could be one, not when you burn as brilliant as the sun.”

Do you plan to read The Prince?