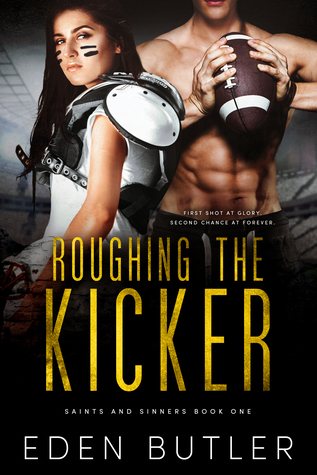 Roughing the Kicker by Eden Butler
Series: Saints and Sinners #1
Genres: Adult, Contemporary, Romance
Publication date: July 31, 2018
Publisher: Self-Published
Format: eARC, 239 pages
How I got it: From the author
Add it: Goodreads
Buy it: Amazon
My rating:

Reese Noble chased this dream for a decade.

Now it was here.

All eyes on the league’s new kicker.

Millions of people expecting her to fail.

But Reese wasn’t a novelty and the spot she landed on the New Orleans Steamers was one she planned to keep.

With her teammates giving her hell and the world doubting her every move, Reese will have to fight harder than anyone else to make her dream a reality.

Even if that means following the lead of Quarterback Ryder Glenn —the only man who brought her to the edge of ecstasy and the depths of heartbreak. The same man who broke her heart ten years before.

In this city, there is a thin line between sin and sainthood and only the strongest can walk it.

I discovered Eden Butler for the first time last year, after one of my bookish besties talked about how much she loved her Seeking Serenity series. I’ve been working my way through her backlist — and anticipating new reads — ever since. When I heard she was writing a book about a female NFL player, I didn’t need to know any more. Roughing the Kicker was basically Kim catnip and I couldn’t get my hands on it quickly enough. It was a fantastic book and kicked off the Saints and Sinners series in a great way. (Ha! See what I did there?)

Heroines are so important to me when I read and I’m a total sucker for unconventional ones. A female NFL player is right up my football-lovin’, feminist alley. Reese was fantastic. She was strong and sassy, determined and relatable. I was fascinated by her story and so badly wanted to see her succeed in the NFL. Goodness knows she was putting up with enough crap to play the sport she loved — and was incredibly talented at. A huge amount of the crap she was dealing with came from her QB teammate — and former boyfriend — Ryder. If I’m being totally honest, I had a bit of a tough go with Ryder in the beginning, but it wasn’t long before I was singing his praises.

Second chance romance is my jam and Reese and Ryder’s story fit the bill. It had the perfect combination of angst, chemistry and banter. There were even a few feels thrown in along the way, too. Roughing the Kicker was a solid book — one that I was unable to put down once I started it. I just had to know what happened between these two in the past and, maybe more importantly, where they would go in the future. I was totally invested in these characters, especially when it came to their romance. And I’d be lying if I didn’t admit I was also really interested in the football aspect of the story. It is my favorite sport, after all, and I’m chomping at the bit for the season to start again…

I’m excited to see what’s next in the Saints and Sinners series! (Oh, and I have every intention of making time to go back and read the Thin Line series as this is a spinoff from it.)

“What the hell happened to you? You used to be a man of honor. Solid. Real. Now… this… If you can’t be that man off the field, then you damn well better do it on it. Earn your overpaid, inflated salary, cabrón.”

But Reese Noble was like lightning. Beautiful. Wild. So fucking dangerous. He had always been drawn to her. He could have never stopped himself from having that first touch, then the first kiss, then the first taste.

“People don’t stop being important to you when they’re not around anymore. If they matter, you find ways to keep them important.”

Have you read any of Eden Butler’s books?
What’d you think?