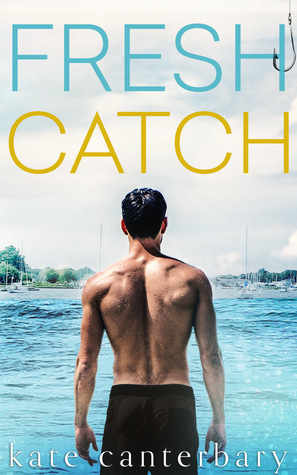 Take a vacation, they said. Get away from Silicon Valley's back-stabbing and power-grabbing. Recharge the innovative batteries. Unwind, then come back stronger than ever.
Instead, I got lost at sea and fell in love with an anti-social lobsterman.
There's one small issue:
Owen Bartlett doesn't know who I am. Who I really am.

I don't like people.
I avoid small talk and socializing, and I kick my companions out of bed before the sun rises.
No strings, no promises, no problems.
Until Cole McClish's boat drifts into Talbott's Cove, and I bend all my rules for the sexy sailor.
I don't know Cole's story or what he's running from, but one thing is certain:
I'm not letting him run away from me.

I fell a wee bit in love with Kate Canterbary when I picked up Underneath It All earlier this year. I’ve wanted to read more from her since finishing that book, but for one reason or another, I’d not made time to do that. I’ve seen Fresh Catch all over bookstagram and other social media, and it’d been awhile since I read a M/M book, so I decided to jump right in. I’m so, so glad I did. It was the perfect summery read.

I have a bit of a thing for books featuring grumpy heroes, and I also enjoy “fish out of water” type books. (Pun intended here, given the title.) Owen and Cole ticked all my bookish boxes — which isn’t nearly as dirty as it might sound — and I fell for them pretty hard. It was delightful to watch these two, who were total opposites, get to know each other and fall for each other. There was a delicious slow burn I couldn’t get quite enough of and that, combined with the low angst and hot sexy times, made Fresh Catch a delightful read.

I have to also mention the setting of Talbott’s Cove. It was magical and Kate described it so well it virtually became a character in and of itself. What I wouldn’t give to get away to little town just like this off the coast of Maine. There were many interesting characters in the town and I can’t wait to continue on with this series to get their stories. Next up is Hard Pressed, in which the sweet, if slightly misguided bookstore owner Annette pairs up with the town sheriff and (hopefully) gets her own HEA. I felt kinda bad for her in this book because she had such a big crush on Owen and was a little heartbroken to learn he was, in fact, gay. She deserves a happy ending.

Fresh Catch was delightful. From the characters to the setting to the story, I loved all of it. I also really enjoyed one passage in particular, in which Owen unloads his thoughts on social media. It was absolutely brilliant. So brilliant, in fact, that I posted the passage on my own social media and it got a lot of attention. Total perfection, and just one of the things that make Kate’s books so special. I’m a fan.

It was a damn good thing he was hotter than the sun itself because there’d be no surviving his chaos otherwise.

“What the fuck are you doing to me? What the running fuck is happening right now? This is what a supernova feels like. Or breaking the sound barrier. Or cold fusion. Maybe dark matter. I don’t know much about that but—”

“If there’s one thing I’ve learned in my time on this planet, it’s that I can’t wait for people to be perfect. I can’t reject them because they don’t know the best way to open a discussion on my queer life. I can want more and demand more, but I’m not going to refuse them when they’re trying.”

Summer love was never meant for me. It wasn’t mine to keep. I built sandcastle dreams and the tides washed them away every time.

Kate Canterbary doesn't have it all figured out, but this is what she knows for sure: spicy-ass salsa and tequila solve most problems, living on the ocean--Pacific or Atlantic--is the closest place to perfection, and writing smart, smutty stories is a better than any amount of chocolate. She started out reporting for an indie arts and entertainment newspaper back when people still read newspapers, and she has been writing and surreptitiously interviewing people—be careful sitting down next to her on an airplane—ever since. Kate lives on the water in New England with Mr. Canterbary and the Little Baby Canterbary, and when she isn't writing sexy architects, she's scheduling her days around the region's best food trucks.