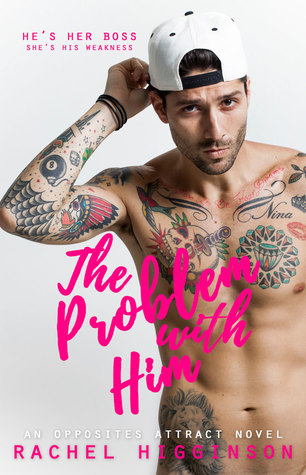 The Problem with Him by Rachel Higginson
Series: Opposites Attract #3
Genres: Adult, Contemporary, Romance
Publication date: June 26, 2018
Publisher: Self-Published
Format: eARC, 328 pages
How I got it: From the author
Add it: Goodreads
Buy it: Amazon
My rating:
Heat level:

Or at least the ones that work in my kitchen. Fine, one man in particular. Wyatt Shaw is cocky and condescending and so far out of his element that he doesn’t know which way is up. Or how to run his brand new kitchen all by himself.

That’s where I come in. Sous chef extraordinaire. Second in command. Bane of his existence. I am the reason Wyatt’s doing so well as the new executive chef of one of our city’s most prestigious restaurants. He has me to thank for his glowing accolades and five-star write-ups. Only if you were to ask him, he’d say I’m his biggest problem.

Despite his discouragement and bullish behavior, I’ve set two goals for myself.

The first? I’m going to fight my way to the top of this male-dominated industry and claim my own award-winning kitchen.

The second? I’m going to do whatever it takes to ignore Wyatt and his rare smiles and the thickening tension that’s started to simmer between us.

Wyatt Shaw might be Durham’s new shining star. He might be up for a James Beard Award. He might be my new boss and key to my future success, but he’s also in my way.

So he can keep his smoldering looks and secret kisses. And he can be the one that figures out how to make it through service without getting distracted by me.

I’m not the problem. The problem is him.

I loved The Problem with Him so, so very much. Kaya was amazing. Wyatt was everything I wanted him to be and more. What started as workplace animosity built into fantastic chemistry between two characters who really were perfect for each other.

I’ve basically been waiting for/hoping for Wyatt to get a book since meeting him in The Opposite of You. I found him intriguing then and I wasn’t wrong. While we don’t actually get any time in his head, I didn’t feel like I really needed it. (Though I wouldn’t have said no to it, either.) He had his grumpy moments — which isn’t a problem because I love me some grumpy heroes — and he was certainly complicated, but I loved him.

As much as I adored Wyatt, Kaya was the real star of the show in The Problem with Him. What a fantastic heroine! She was smart, talented and driven. It was so easy to root for her throughout this book, whether with the Wyatt situation or with her dream of getting her own restaurant. She took life by the balls and made the most of every opportunity. But she wasn’t without her moments of doubt, which just made her all the more realistic to me. I loved how she matured and grew over the course of this book.

Much like with the first two books in the Opposites Attract series, I fell hard and fast for the characters and just couldn’t get enough of the characters. (Bonus: lots of Vera and Killian!) Kaya and Wyatt’s chemistry was off the charts and the slow burn between them was absolutely delicious. I do love the sexual tension — and everything that comes after, of course. And, as much as I enjoyed the romance, I enjoyed all of Kaya’s character growth just as much.

I’m so glad I discovered the Opposites Attract series in all its delightfulness. I fall a little more in love with it with each new book. That’s just one reason why The Something About Her can’t get here soon enough. Come on, February!

He was everything I shouldn’t want, like, or notice. Not because of the tattoos. Or even because of the piercings he’d removed since he’d been promoted. He was the kind of guy I should have been able to ignore entirely because of how opposite we were, because of how much we hated each other.

“Kaya,” he growled against my skin, sinking his teeth into my neck in the sexiest bite of all time. He was getting me back for the one time I’d bitten his finger. Only his way was worse. His was sex and fire and the fucking end of me.

This was what I wanted. This right here. Him. Wyatt. His touch and his taste and the wicked things I knew he would do to me.

Are you embarrassed by how much you need me? I asked him.
Not even a little bit, he’d typed back immediately. Pretty sure I’ve needed you for a long time.

But that wasn’t a normal smile. That was sex and sin and very dirty things.

Have you read any of Rachel’s books?
Do you have a favorite?