Welcome to my stop on the blog tour for Jennifer L. Armentrout’s latest, Moonlight Seduction. It’s the second book in her sexy and mysterious de Vincent series. Look for my review very soon… but in the meantime, enjoy the excerpt! 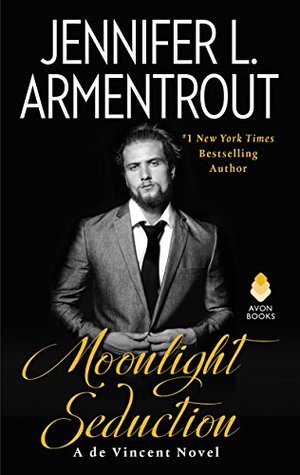 Nicolette Bresson never thought she’d return to the de Vincents’ bayou compound. It’s where her parents work, where Nikki grew up... and where she got her heart broken by Gabriel de Vincent himself. Yet here she is, filling in for her sick mother. Avoiding Gabe should be easy, especially when so much of Nikki’s time is spent trying not to be stabbed in the back by the malicious hangers-on who frequent the mansion. But escaping memories of Gabe, much less his smoking-hot presence, is harder than expected—especially since he seems determined to be in Nikki’s space as much as possible.

Gabriel spent years beating himself up over his last encounter with Nikki. He’d wanted her then, but for reasons that were bad for both of them. Things have now changed. Gabe sees more than a girl he’s known forever; he sees a smart, talented, and heartbreakingly beautiful woman... one who’s being stalked from the shadows. Now, Gabe will do anything to keep Nikki safe—and to stop the de Vincent curse from striking again.

He moved forward, maybe a foot or two, but stopped like one would if they were approaching a rabid dog. A heartbeat passed. “Your hair . . .” He tilted his head to the side. “It’s different.”

“Yeah, it is.” Her hair used to be a rather dull medium brown, but then she found this amazing hair stylist in Tuscaloosa and turned her brown hair into this array of blondes and browns, using some weird technique called balayage. “It’s basically just highlights and stuff.” “Stuff.”

His gaze flickered over the bun. Uncomfortable, she scanned the kitchen. “And my hair is longer. A lot longer.”

Was she really telling him the length of her hair? This was the most strained conversation she’d ever had in her life. And that was, well, it was sad. She peeked at him. It used to not be this way. Back before . . . well, before she ruined everything, he’d be teasing her and asking about her college. He’d be talking to her like he could actually stand being in the same room with her.

She needed this conversation to be over like it was yesterday and she also needed to figure out how she could work here and not run into Gabe. The house was big enough that it should be possible. “I need to get back to—”

“Planting your face against the over door?”

Her shoulders slumped. “Actually, I need to finish the potatoes. So, if you’ll excuse me.” She started to turn away, praying that he’d just leave.

“That’s it? That’s all you have to say to me? Because I have a lot I need to say to you,” he said. “Never in a million years did I think I’d see you here again.”

Nikki’s spine stiffened like steel had been poured into it. Oh God. Her throat spasmed.

“No we don’t,” she said quickly. “We do not need to talk about anything.”

“Bullshit,” he snapped, and his voice was so much closer that she turned to him on instinct.

Gabe was now at the edge of the massive island, only two or three feet from her. She stepped back into the counter. Her heart thundered in her chest as her gaze flicked to the kitchen door.

“No one is coming near here,” he said as if reading her mind. Her gaze flew back to his. “Dev is in his office on the second floor, in a meeting and your father is out with the landscaper. No one is going to hear us.”

A weird mixture of sensations assaulted her. One was a chill that skated down her spine. The other was a tight, hot shiver that danced over her skin.

Gabe kept coming at her, not stopping until he was right in front of her, separated by a few inches. She sucked in air, catching the crisp, clean scent of his cologne. It reminded her of storms, of that night.

That was the last thing she wanted to be reminded of.

Like his brother, he was a good head and then some taller than her, so right now, her eyes were fastened to his chest.

Thank God he was wearing a shirt.

Her body jerked as she pressed her lips together. He was right. She owed him a conversation. “Okay.”

There was another beat of silence and then he asked in a voice so low she almost didn’t believe she heard him right.

“Did I hurt you that night?”

Have you read any of the de Vincent series?