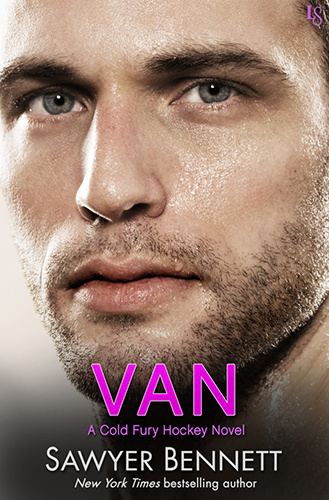 As one of the league’s toughest enforcers, Van Turner is ruthless on the ice. He plays hard because it’s the only way to channel the rage boiling inside, and a reputation as an A-hole is better than everyone knowing the truth. Van has spent his entire life running from a secret that’s kept him from getting involved in relationships—or accepting lucrative deals with East Coast teams. Then the Carolina Cold Fury makes him an offer he can’t refuse... and Van meets a woman he can’t resist.

Simone Fournier is the stubborn one in her family—and that’s saying something, considering her brothers are two of the Cold Fury’s biggest stars. Simone gets what she wants, and what she wants is Van. Still, there’s a part of him Simone can’t reach, no matter how hard she tries. In private, he’s all fire and passion. In public, he freezes her out. Van may want to push her away, but Simone won’t let him go that easily. Because this time, she’s playing for keeps.

I was really nervous about Van because, well, he wasn’t the most likable guy in Lucas. The preview chapter at the end of that book made me even more nervous because I was afraid he was going to be a total prick to Simone. (And, I mean, he was at the beginning.) But OMG did I fall in love with him and this book. Van had some major grump going on, but underneath it all he was amazing.

Van took the phrase “complex character” to a whole new level. I don’t want to get too far into spoilers, but let’s just say his father’s past had a huge impact on who he was. Or, who he showed the world he was anyhow. I was a little frustrated with him in the beginning because of how he treated Simone, who was literally throwing herself at him (not that I blame or shame) when it was obvious he was into her. Thankfully it didn’t take long before he let her in — and in a big way, too. I loved watching him open up to her. Simone was no slouch either, but Van really was the star of the show here for me.

It’s been ages since I read my previous favorite books in the Cold Fury Hockey series — Zack and Ryker — but Van is definitely on par with them. In fact, he might be my favorite so far… if I played favorites, that is. I enjoyed my little two book binge of Sawyer’s world and I’m looking very much forward to getting totally caught up on this series soon. Sawyer’s hockey books are some of my favorites!

“Now that you’re wearing my sweat on your skin, you’ve sort of lost your shine. Time to move on.”

“I know you, Van Turner. And I think you’re mighty fine.”

“Van? Am I still shiny?”
“Yes, Simone. So fucking shiny you make everything else in the world seem a little dull by comparison.”

Do you love hockey romance?
What are some of your favorites?