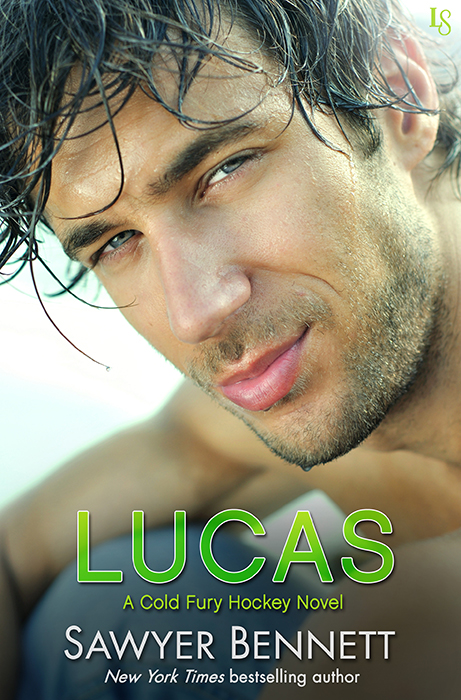 Lucas Fournier is only serious about one thing: hockey. The league’s fun-loving charmer, Luc is always up for a good prank or a great lay, and he has no intention of settling down. But being traded to the Carolina Cold Fury—and to play alongside his big brother, Max—is no joke. With another title in sight, the last thing Luc wants is to let his new teammates down. To succeed, Luc will need to keep his head in the game and the most... er, demanding member of his anatomy in check. But when temptation hits, Luc hits back harder.

Museum curator Stephanie Frazier has always put business before pleasure, which just about explains her nonexistent sex life. But when Stephanie meets Luc at a champagne-fueled gala, she finds herself flirting like crazy—and going home with the uninhibited athlete. For one night, she learns what passion is all about. She just never counted on the little surprise Luc leaves behind. And that’s when things really start to get... interesting.

Sawyer Bennett is one of those authors whose work I always enjoy. Lucas was no exception, even if I kinda wanted to shake sense into both characters at times. There was a lot of back and forth, but ultimately I liked where everything ended up.

Both Lucas and Stephanie were interesting, complex characters. If I’m being totally honest, Steph was a bit tough to take at times. She didn’t just have walls around her, she basically had a fort. Nothing was getting through there… right? I understood why she was so closed off, she might’ve come from a life of privilege when it came to things but she never really had the love and affection she needed. Lucas was totally swoony. I mean, yes, he was a total playboy and the last thing he was looking for was something serious, but as things unfolded he changed his tune in the best way possible. He basically wore his heart on his sleeve and begged Steph to be brave enough to take it.

Lucas and Steph went from 0 to 100 after she got pregnant during their one night stand. They went from relative strangers — who just happened to have seen each other naked — to awkwardly trying to get to know each other and figure out where to go from there. I really did like the progress of their relationship — except the back and forth did get a wee bit old after awhile. Basically I wanted to grab Steph and shake her and yell “GIRL! He’s right in front of you and he wants you! Go get him!” in the hopes she’d let him in for real. Steph and Lucas had amazing chemistry and I liked how playful they were with each other. I shipped it pretty hard.

I’m riding high on a victory that I helped to seal, and while Max may be about true love, I’m about orgasms.

I suppose there’s a reason we have one-night stands. You engage in the most intimate activity imaginable with a near stranger and then you go your separate ways. It doesn’t get any more awkward that impregnating that stranger.

I don’t know what will become of Lucas and me in the future, but I can say he’s given me one of the happiest moments I’ll ever have and I’ll treasure this time together for the rest of my life.

What are some of your favorite hockey romances?