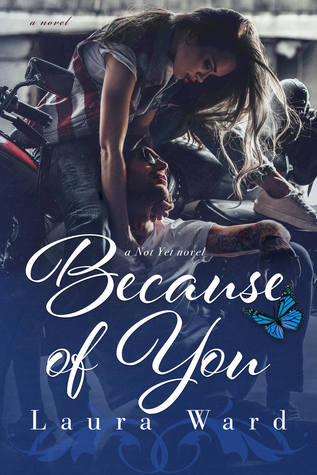 Because of You by Laura Ward
Series: Not Yet #4
Genres: New Adult, Contemporary, Romance
Publication date: May 25, 2018
Publisher: Self-Published
Format: eARC, 258 pages
How I got it: From the author
Add it: Goodreads
Buy it: Amazon

All Ricky Martinez knows of life is loss, loyalty, and family.

When his father became a quadriplegic after breaking his neck saving a drowning girl, Ricky gave up his dreams of playing football at a big college to stay home and take care of his family. His new dream? Find the girl who caused his father’s injury and get justice.

Because of her, his family lost everything.

All Aveline Gerard knows of life is a quiet, protective love.

Homeschooled ever since her accident eighteen years ago, Aveline’s parents, both deaf, have kept her safe the only way they know how—sheltered, and alone. Aveline’s deepest desire? To experience life in all its loud and messy glory, and the tattooed guy in her first college class is all of those things.

Because of him, her life is finally beginning.

But fate has a wicked sense of justice and when Ricky realizes the sweet, shy girl in his class is the one who wrecked his family, will he be able to walk away? Or will the bitter rage inside cause him to make the biggest mistake of his life?

Because of them, the pain of two families will finally collide.

I have to be completely honest, I’m not really sure what to say about Because of You. This book totally put me through the wringer and I had so many conflicting emotions throughout it. But don’t take that as a bad thing. It wasn’t at all. I really enjoyed this one, uncomfortable emotions and all.

First, I have to say I really appreciated the set up for this story. “Bad boy” from the wrong side of the tracks with a tragic past meets the “rich girl” who he believes stole everything from him. The friendship (and more) the boy planned to use as a way to get even and get what he felt he and his family deserved ended up changing both of their lives. It could’ve been cliche, but it was far from it. Thanks to Laura’s writing, it had a whole lot of heart and, well, all the feels.

I’m not going to lie, I had a tough time with Ricky for a good portion of this book. I understood why he was hurt and why he wanted to basically get even and have Aveline’s family pay him and his family back for what transpired years ago. But I also didn’t like the idea of him hurting Aveline. I know his family was dealing with a lot. He had a lot of anger issues and that worried me. It’s like he was in constant conflict throughout the book — between the monster that raged inside and the good, caring man he could be without even really trying. I, too, was in a constant state of conflict when it came to him because of this. Just when he’d do something so sweet it made me swoon, he’d turn around and do something hurtful and I’d get mad all over again. It was quite a ride. (I should be very specific here, because triggers, he wasn’t physically or emotionally abusive to Aveline.)

I loved Aveline right from the very start. Something about her innocence and naïveté made me want to protect her. I’m pretty sure that’s why I had a tough time with Ricky. He once described her as a butterfly and that’s a pretty accurate analogy. I was terrified he would crush her. While Ricky thought her home life was perfect because she was rich and had two healthy parents, he didn’t really know the full story there either. He made a lot of assumptions. But even while I feared for what the future would bring for them once all the secrets were revealed, I couldn’t help but ship them. They really were good for each other, despite everything.

I thought Because of You was a beautiful book. Laura has a real knack for writing these gorgeous books that make you stop and think about everything. She certainly did that here with a coming of age tale that touches on guilt and anger and overcoming the past to find true love. Ricky and Avenline’s story alone would’ve been enough, but I couldn’t help but be thrilled by the appearance of some of my favorites from earlier in this series. There were some pretty special scenes with them, too. My bookish heart was totally full after finishing this book.

I was ready to live my life, fully and unafraid. For the first time ever.

Because the monster inside me won. And when it did, a butterfly lost her wings.

The monster was gone. In his place was a man who had won. 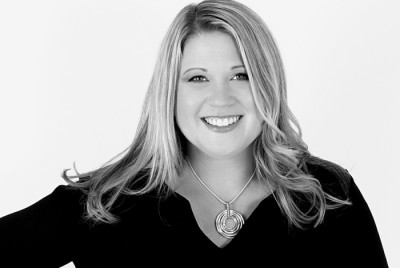 Laura Ward lives in Maryland with her loud and very loving three children and husband. She married her college sweetheart and is endlessly grateful for the support he has given her through all their years together, and especially toward her goal of writing books. When not changing diapers, driving to lacrosse practice, or checking spelling homework, Laura is writing or reading romance novels.

Have you read any of Laura’s books?

Tags: 4 Star Review, Because of You, In Review, Laura Ward, Not Yet