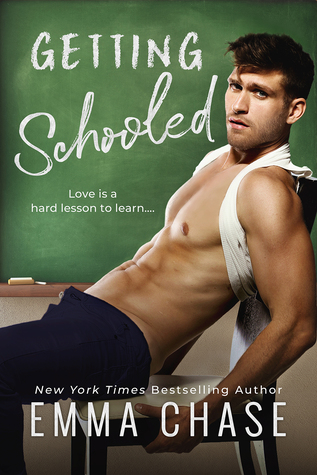 Head of the class...

Garrett Daniels has this whole life thing figured out.

The cocky, charismatic former high school star quarterback is an idolized football coach and "cool" teacher in the hometown where he's not just a golden boy — he's platinum. He has good friends, a great house on the lake, and the best damn sidekick a man could ask for: Snoopy, the albino beagle.

And knocks him right on his tight end zone.

Callie has a pretty sweet life herself...on the other side of the country. But circumstances — that she'd prefer to never speak of again — have brought her back home, helping out her parents and substitute teaching at her old high school.

When Garrett offers to show his former high school sweetheart the secrets of his winning teacher ways, Callie jumps at the chance - and then has to stop herself from jumping him.

Good friends are all they can ever be.

Or...these teachers just might end up getting schooled — hard — by love.

Getting Schooled gets an A+ from me! From Emma’s writing to the audiobook dream team Andi Arndt and Zachary Webber, it was absolutely perfect. I usually find road trips boring and/or exhausting, but I had the best drive EVER across the mountains of western Maryland thanks to this book. I couldn’t love it more if I tried.

Man. This book. I laughed, swooned and smiled my way through Getting Schooled. No lie, I was “that person” in my car, laughing my head off while reading. (Until, of course, that one super sad thing near the end of the book that had me quite literally sobbing. Holy unexpected feels.) I freaking love second chance romance and Garrett and Callie’s is one of the best I’ve read in a very long time. I fell head over heels in love with both characters. They were fantastic and despite the time that’d passed, there was absolutely no doubt they were endgame. In fact, it was almost as though they’d never been separated at all. They were that perfect of a fit.

Anyone who reads Emma Chase’s books knows she excels at writing the male POV. She’s a freaking genius. Garrett is near the top of the list of my favorites of her guys so far. He was just … real. His romance with Callie was one thing, but the way he was with his students and players made him even better in my eyes. It was obvious how much he cared about those kids. He made me laugh and swoon and even cry. Feels for freaking days with this one. And, of course, Callie was also wonderful. I loved spending time in her head, too.

So yeah, I loved every little thing about this book. I could gush about it forever. It was a total delight. I was so in love with the story that I really wanted to buy the ebook so I could finish it sooner, because there were 3 days between my days in the car. Of course, that was a big womp womp because it’s not on ebook yet. It was a total lesson in self-restraint. It was all worth the wait, however, because Andi and Zachary were AMAZING. They really brought the characters and the story to life. I can’t wait to see what’s next in the Getting Schooled series. And to, of course, buy the audio and a paperback because I need to listen to this again and again… And I really need Garrett and Callie on my shelves.

“You were always my girl, Callie. Even after you weren’t any more.”

Do you love Emma Chase’s heroes as much as I do?
Can you pick a favorite?