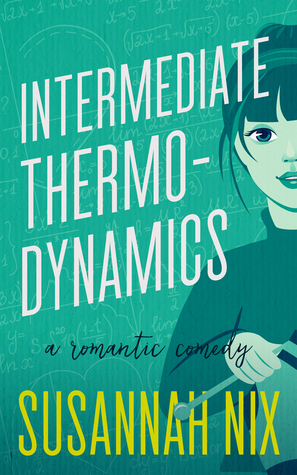 Aerospace engineer Esther Abbott doesn’t believe in love, but she’s perfectly happy hating her screenwriter neighbor, Jonathan. Until she’s forced to make a devil’s bargain with him: if he distracts her best friend from a mouth-breather ex, Esther will be his science advisor for the sci-fi script he's writing.

Her patience is put to the test when it’s time to fulfill her end of the deal. But the more time she spends with her nemesis, the more hate turns into attraction—and attraction into something much deeper. As Esther’s carefully-constructed defenses start to crumble, will love be her undoing or her salvation?

Intermediate Thermodynamics follows in the tradition of contemporary romantic comedy favorites like Penny Reid, Sally Thorne, and Jennifer Crusie. This sweet, enemies-to-lovers romance is the second in a series of standalone rom-coms featuring geeky heroines who work in STEM fields.

I am so freaking glad I finally made the time to dive into Susannah Nix’s Chemistry Lessons series. If you read my review of the first book in the series, Remedial Rocket Science, you know how much I enjoyed it. It got me off to a good start with Susannah’s writing and the series, but Intermediate Thermodynamics was a whole other level for me. I loved every little thing about this delightful book. I listened to the audiobook version and I think that made it even better. You know I’m loving a book when I make excuses to keep listening, like, more chores. Or more time on the treadmill. Not only was it a wonderful story with characters I absolutely loved, but it was a great motivator, too. 😉

I’m not sure what to say about Esther. She was a difficult character at times. But I appreciated her. Hell, I related to her in several aspects. She wasn’t one to mince words or actions, which might be off-putting to some, but not to me. The only thing I had a bit of an issue with was her setting up her friend Jinny with her neighbor Jonathan. It was a little on the calculated side, but she did also have her friend’s best interests at heart. No one wants to watch their friend date a jerk. Or worse, repeatedly go back to them. Of course, it gets that much more complicated once Esther realizes SHE is developing feelings for Jonathan and her keeping that from Jinny — even after Jinny and Jonathan stopped seeing each other — left a bad taste in my mouth. But, that’s all part of the story and Esther’s growth.

I can’t review this book without mentioning Jonathan and how much I absolutely adored him. He was delightfully swoony. IMHO, Esther should’ve given him a fair shot a little earlier on, but she didn’t. And ultimately she’s the one who got hurt by that before it was all said and done. But if the stuff never happened with Jinny, Esther wouldn’t have grown as she did and I wouldn’t want to lose that. It was an important part of the story. Regardless, I LOVED reading along as Jonathan and Esther got to know each other better. First as friends and then as more. The feels! (Even if it got messy.)

Intermediate Thermodynamics was so much more than I thought it would be. I don’t mean that in a bad way. I thought I’d be getting a cute romance with a smart woman and her artsy neighbor. But, there was a lot more depth to this story. From its look at friendship and workplace dynamics to Esther wrestling with the fear of falling for someone and what it all meant, I couldn’t get enough. I smiled, laughed and even cried. The chemistry! The sexy times! It gave me everything I wanted and more.

As far as the audio went for this one, I can’t recommend it highly enough. Caitlin Kelly did a great job reading this one. She did a wonderful job with both of the Chemistry Lessons books, so I need her to voice more audiobooks. She was Esther for me. I also loved how she brought the other characters to life. Her performance made an enjoyable story that much more enjoyable.

Forget princes. You had to make your own luck in life. If you wanted something, you couldn’t sit back and wait for it to fall into your lap. You had to go out and make it happen.

“Love is madness. It’s a compulsion. It’s passion and torment and exhilaration and fear.”

“You picked cheese over an attractive man who liked you.”

“I want you. I’ve always wanted you, from the first moment I saw you.”

Susannah Nix lives in Texas with her husband, two ornery cats, and a flatulent pit bull. When she’s not writing, she enjoys reading, cooking, knitting, watching stupid amounts of television, and getting distracted by Tumblr. She is also a powerlifter who can deadlift as much as Captain America weighs.

Have you read any of Susannah Nix’s novels?
What’d you think?