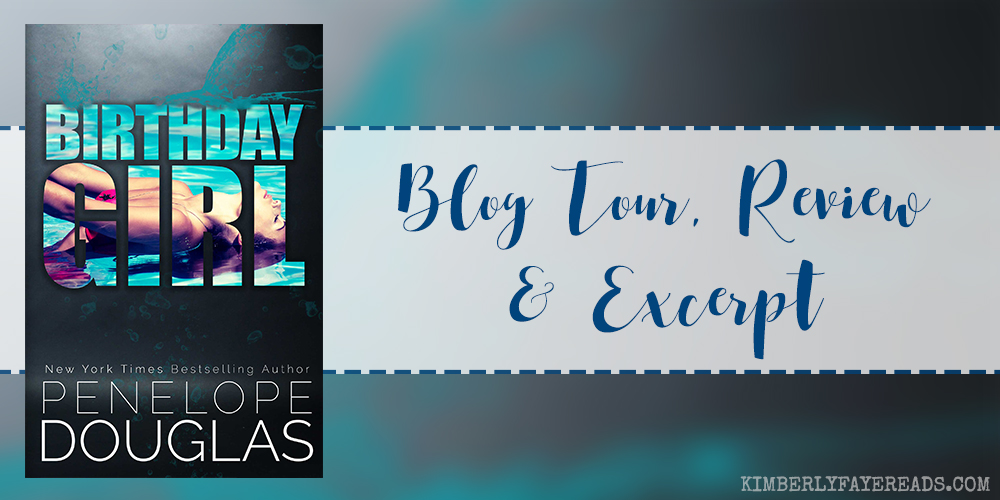 Welcome to my stop on the blog tour for Penelope Douglas’s latest, Birthday Girl! This book was so freaking good, with its hot and sexy “forbidden” romance and all the feels that came along with it. It was all I wanted it to be… and more. 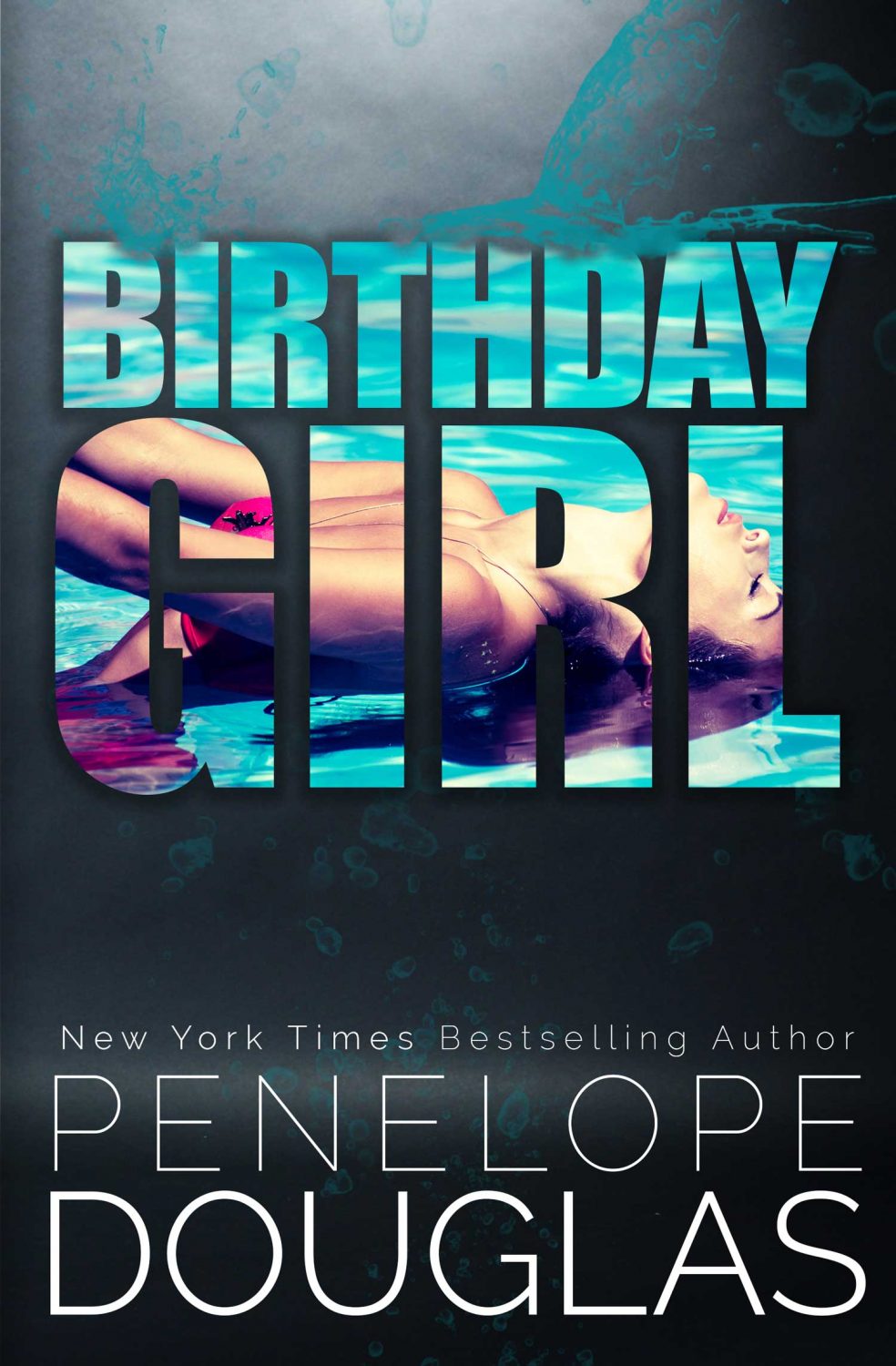 Birthday Girl by Penelope Douglas
Genres: Contemporary, Romance
Publication date: April 17, 2018
Publisher: Self-Published
Format: eARC, 349 pages
How I got it: From the author
Add it: Goodreads
Buy it: Amazon
My rating:

He took me in when I had nowhere else to go.

He doesn’t use me, hurt me, or forget about me. He doesn’t treat me like I’m nothing, take me for granted, or make me feel unsafe.

He remembers me, laughs with me, and looks at me. He listens to me, protects me, and sees me. I can feel his eyes on me over the breakfast table, and my heart pumps so hard when I hear him pull in the driveway after work.

I have to stop this. It can’t happen.

My sister once told me there are no good men, and if you find one, he’s probably unavailable.

Only Pike Lawson isn’t the unavailable one.

I took her in, because I thought I was helping.

She’d cook a few meals and clean up a little. It was an easy arrangement.

As the days go by, though, it’s becoming anything but easy. I have to stop my mind from drifting to her and stop holding my breath every time I bump into her in the house. I can’t touch her, and I shouldn’t want to.

The more I find my path crossing hers, though, the more she’s becoming a part of me.

But we’re not free to give into this. She’s nineteen, and I’m thirty-eight.

And her boyfriend’s father.

Unfortunately, they both just moved into my house.

Birthday Girl took me by surprise. I was expecting a book where the focus was more on the hot and sexy times, on the desire you find in a “forbidden” romance and maybe not so much on the emotions. I couldn’t have been more wrong. Now, don’t mistake me, there’s plenty of the sexy stuff. The emotional stuff was more unexpected and, if I’m honest, it’s what pushed this book from good to great for me. The feelings and growth and the true connection between these characters is what makes it memorable. And I can tell you, I’ve barely stopped thinking about it since I finished it… and I don’t expect to anytime soon.

Forbidden romances aren’t always my jam, but it depends on the setup. Of course, I love Penelope Douglas’s books so it should be no surprise at all to learn I basically dropped everything else to read this one as soon as I got my hands on it. Plus, I was intrigued by Pike and Jordan’s connection — through her boyfriend who happens to be his son, Cole. Oh and did I mention they’re all living under the same roof? It’s like freaking catnip to me. I was a little worried about whether there would be cheating or a ridiculous love triangle, but I should’ve known better. I can trust Penelope.

Man oh man did I love Jordan and Pike. (I’ll admit I wasn’t ever a fan of Cole… or at least not until closer to the end of the book.) These two had wicked hot chemistry. I mean, I straight up thought my iPad might catch fire from the sparks flying between them. I knew it would be SO FREAKING GOOD when they finally got together and I pretty much wanted to lock them in a room together to get a move on things. But, I was conflicted because the story was so good and I also loved the slow burn thing they had happening. (And, you know, there had to be some resolution with Cole before anything could or should really happen.)

I loved reading along as things developed between Jordan and Pike so, so much. I was totally in for them. The age difference didn’t bother me a bit and I think that’s because they seemed so well-suited for each other despite it. Also, it was obvious there was more than just lust happening. They had a real connection. I loved what they found with each other. I’m not going to say much more about the plot of Birthday Girl. I’ll just highly recommend you read it and experience it for yourself. I do suggest you prepare yourself for some pretty big feels, too, if you’re an emotional reader like I am. Don’t fret, it’s nothing too overwhelming, but I got all teary. I’ll admit it. Jordan and Pike were special and so was their story.

It’s always the same wish. Every candle. Every time. I want a life I never want to take a vacation from. That’s my goal.

“I like you watching me. You’ve always watched me, haven’t you? Always wanted to have your fun with me.”

“We don’t need food to survive this life as much as we need our hearts broken at least once. But the best part is, the first break is always the worst. It’ll never feel this bad again.”

I drop the hose to my side and drag the fingers of my left hand down his abs, my heart pounding so hard it hurts. They tighten as my nails slide across the muscles, and I’m so afraid to look at him.

This is wrong. I know it’s wrong.

But God, he feels good. I can feel his eyes on me, and every thread of my bra is chafing my skin, and I just want to be bare right now. I want him to see me.

“Jordan…” He grasps my hand, and I can hear him breathing hard.

I nod, opening my eyes but still unable to meet his. “I know,” I breathe out. “I’m sorry.”

I’m parched, my eyes sting with tears and I don’t know why, and there’s a need between my thighs that is almost painful.

Slowly, he tips my chin up. I finally raise my gaze, but he’s not looking at me, either. His eyes are cast down, and his brow is pinched in pain. “You’re just out of sorts,” he says quietly. “You miss Cole, and I just happen to be here. It’s okay.”

I remain still, my fingers still on his stomach and his hand still on my chin. His chest moves up and down, and for a moment, I think I’m going to turn tail and run. He’s making excuses for me. An easy one to hide behind. It would make sense I’m feeling lost and in need of someone else to escape into.

But what’s his excuse. I know he looks at me. I know he does it when he thinks I don’t see it, but I do.

My eyes sting, filling with tears. “That’s not why I was apologizing,” I tell him.

I raise my eyes, meeting his, and while I’m afraid, I have to dive. I can’t hold back.

“I’m sorry, because,” I whisper shakily, “this isn’t the first time I wanted you to touch me.”

And his gaze freezes on me.

He holds my eyes, unmoving except for the rise and fall of his chest, and I have no idea what’s going through his head right now, but I don’t think I’m sorry. No more excuses that this is about me being distraught over Cole.

The attraction was already there.

He slowly lets his fingers fall from my chin, both of his hands balling into fists, and he clenches his jaw, suddenly looking angry.

On reflex, I take a step back, but I don’t get any farther. Grabbing my waist, he hauls me into him, snaking an arm round me and gripping my jaw in his hand between his thumb and four fingers. I gasp, loving the feeling of his body hard against mine but scared, too, because he looks so mad.

“No,” he growls, baring his teeth and looking at me with fury in his eyes. “Do you understand? It’s not happening. You’re not getting that from me.”

Tears fills my eyes, and I can barely see him anymore as my body shakes with a silent sob.

His arm is like steel around me, and I can feel the heat of his rage coming off his skin.

He shakes me. “You wanna get laid, then you go hunt somewhere else.”

I suck in air and twist away from him, pushing his body away.

He’s right. What am I doing? Why would I do that? I feel so stupid, and I crouch down, quickly gathering up my shirt and shoes.

But I wasn’t imagining it, was I? There was something between us, and it was coming from him as much as from me. Did I just see what I wanted to see?

I want to scream. Tears stream down my face, and he still just stands there, glaring at me.

I break out in a laugh, the bitter sound dripping with disbelief. “Go fuck yourself!” I stand up, hardening my voice. “I’ll find another bed tonight, thank you. Anyone will do for a slut like me, right?”

I whip around and run for the back door, but he grabs the inside of my elbow and hauls me back into the wall of his chest. I drop my shirt and shoes, and he forces us forward into the wall of the house. I shoot out my hands, crashing into the siding.

I shake, sucking in short, shallow breaths as my heart races and my blood runs hot under my skin.

He reaches around, taking my face in his hand and his hot breath in my ear. “Don’t threaten me with shit like that. If you want to act like a brat, then maybe you should get grounded like one, huh?”

I almost laugh through the tears drying on my face. “By all means,” I taunt. “I’m dying to see how you try to take control of me. You can’t even get Cole to do his chores, and when was the last time a woman got hot in your bed? You’re not even a man.”

He growls and slams his palm into the house in front of me.

And the next thing I know, his hand is in my hair, and my head is being twisted to the side as his lips crash down on mine. 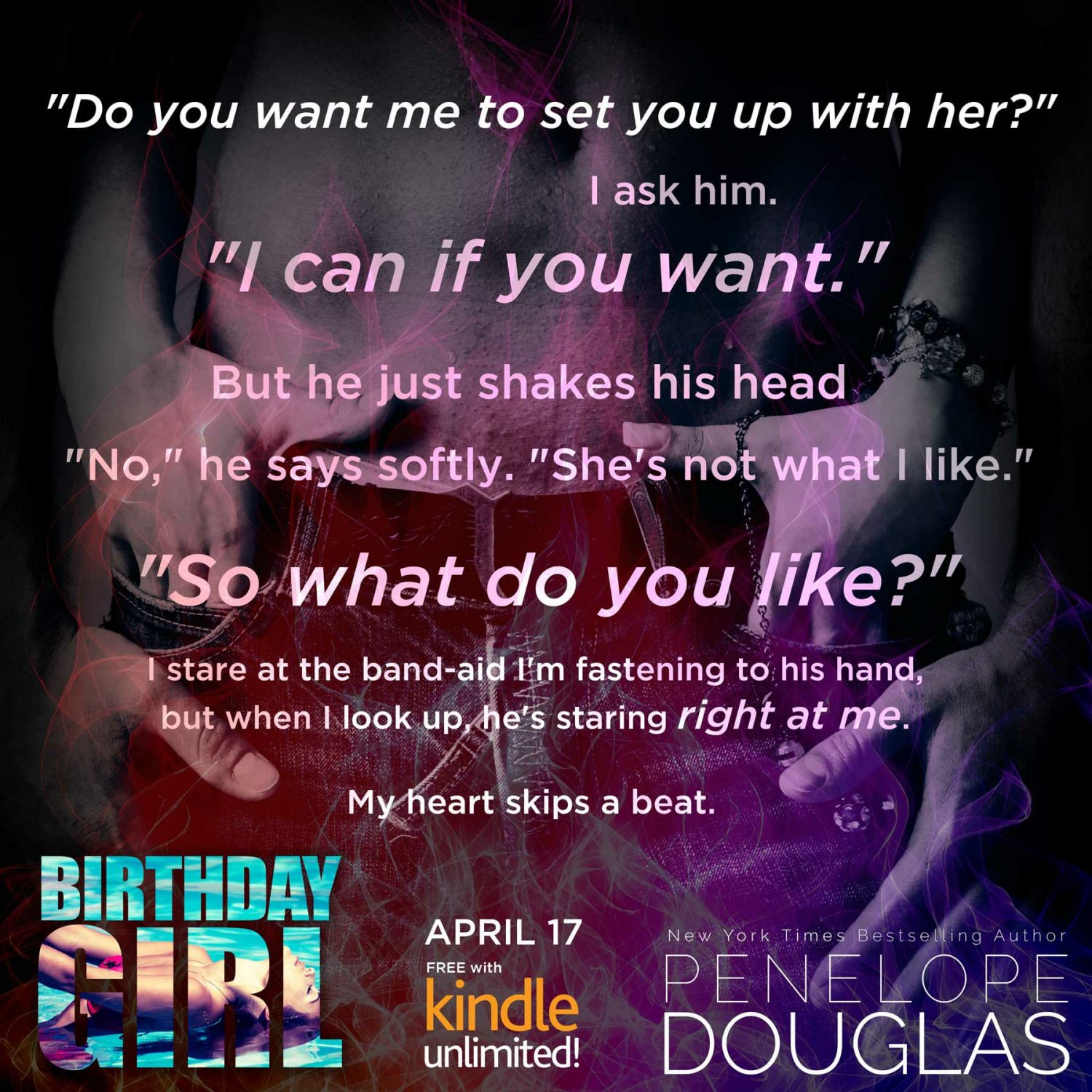 Do you plan to read Birthday Girl — if you haven’t already, that is?