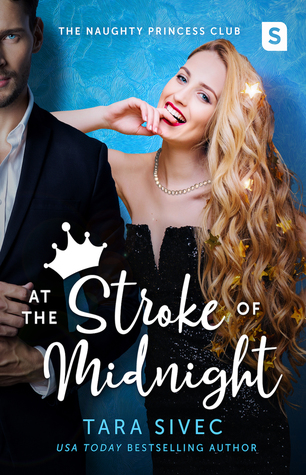 At the Stroke of Midnight by Tara Sivec
Series: Naughty Princess Club #1
Genres: Adult, Contemporary, Romance
Publication date: February 27, 2018
Publisher: SMP Swerve
Format: eBook, 261 pages
How I got it: I bought it!
Add it: Goodreads
Buy it: Amazon | Barnes & Noble | iTunes
My rating:

Once upon a time Cynthia was the perfect housewife. Between being the President of the PTA and keeping her home spotless without a hair (or her pearls) out of place, her life was a dream come true. Her husband was once her knight in shining armor, but now he’s run off with all their money…and the babysitter.

Dressed as a princess at the annual Halloween block party on Fairytale Lane, she meets two other “princesses” also facing money troubles: antique store owner Ariel and librarian Isabelle. When the women are invited to wear their costumes to a party where they’re mistaken for strippers, Cindy, Ariel, and Belle realize that a career change could be the best way to make their money problems go bippity-boppity-boo.

But can structured Cindy approach a stripper pole without sanitizing wipes? And could the blue-eyed anti-prince that has been crossing her path become Cindy’s happily ever after? At the Stroke of Midnight is a hilarious, empowering story where princesses can save themselves while slaying in stilettos.

Y’all, I have a new favorite rom com book and author. Can anyone tell me why in the world I waited this long to pick up a Tara Sivec book? Please? I could kick myself for waiting, but it’s also kind of nice to know I have her very large backlist to discover now. There are worse things.

Sweet baby Jesus, At the Stroke of Midnight was hilarious. It’s not all that often that I find myself literally laughing out loud while reading, let alone laughing to the point of tears. Cindy, Ariel, Isabelle and the gang did that to me multiple times. I howled with laughter through a good portion of the book. Especially at Ariel because she was such a trip. But Cindy, Isabelle and the other characters had their moments, too. What a premise for this one! I’m always a sucker for a good, unique retelling and this is the best (and most unique) one I’ve read in a long time. Buttoned-up, prim and proper (at least on the outside) housewife Cindy and her friends Ariel (fiery, mouthy, witty redhead antiques dealer) and Isabelle (shy, sheltered librarian who still lives at home with her father) decide to start a Princess-themed exotic dancer service after a super awkward situation one evening. Hilarity ensues, as you might imagine. How amazing does that sound?

I breezed through this book in the matter of a few hours one evening. I literally couldn’t put it down once I started reading it. The characters and their banter and the overall story drew me in from the very first pages. I adored Cindy and wanted to see what happened when she finally let loose and took control of her own life. I might’ve side-eyed Ariel in the beginning, but she quickly became one of my favorite characters with her sassy one-liners. Isabelle intrigued me and I’m looking forward to reading her story very soon. But Cindy and her transformation was really the star of the show. She came a long way during this book. And she did it in a way that made me laugh and gave me feels.

I won’t say any more because I don’t want to ruin the story for you. If the premise of this one isn’t enough to make you want to drop everything to read it, I’m not sure what else to tell you. It’s funny and just a bit over the top at times, but I loved that. It also had a great swoony romance and a few feels. I just snagged this one on audio because I know I’ll want to reread (because I already do and I just finished it a couple days ago) and I think it’ll be hilarious on audio. At the Stroke of Midnight is one of my faves of the year so far and I suspect it’ll be on the list when the end of the year rolls around, too.

“Things don’t always need to be so neat and tidy. Life is messy. You’re never going to survive this if you don’t get your hands dirty.”

“I spent thirteen years letting a man tell me what I could and couldn’t do. I’m not about to let it happen again.”

Tara Sivec is a USA Today best-selling author, wife, mother, chauffeur, maid, short-order cook, baby-sitter, and sarcasm expert. She lives in Ohio with her husband and two children and looks forward to the day when they all three of them become adults and move out.

In her spare time, Tara loves to dream about all of the baking she'll do and naps she'll take when she ever gets spare time.

Which Tara Sivec book should be next on my list?