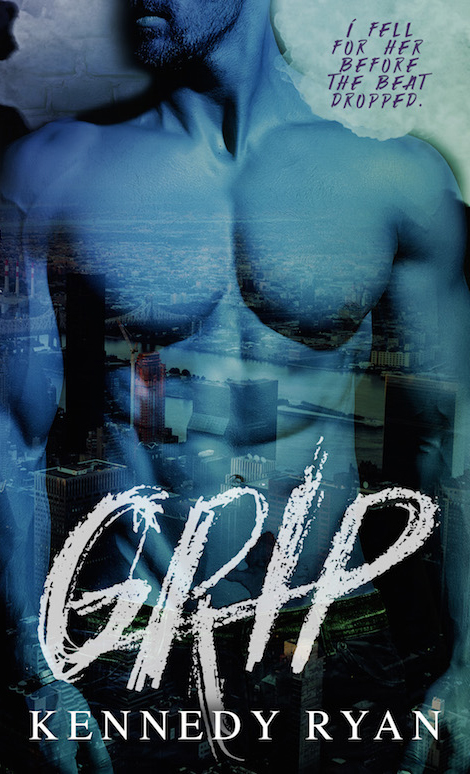 Resisting an irresistible force wears you down and turns you out. I know. I've been doing it for years.

I may not have a musical gift of my own, but I've got a nose for talent and an eye for the extraordinary. And Marlon James - Grip to his fans - is nothing short of extraordinary.

Years ago, we strung together a few magical nights, but I keep those memories in a locked drawer and I've thrown away the key. All that's left is friendship and work.

He's on the verge of unimaginable fame, all his dreams poised to come true. I manage his career, but I can't seem to manage my heart.

It's wild, reckless, disobedient. And it remembers all the things I want to forget.

This book, y’all. After the events at the end of Flow, I suspected Grip would be a more difficult read. But, I had no idea what all it was going to put me through. Be forewarned, my review will likely be (at least vaguely) spoilery so if you’ve not yet read this book and want to go in blind, you might want to skip this. I won’t blame you. Ok, now onward.

I fell in love with Grip and Bristol in Flow. I was shipping the hell out of them. So, naturally I was upset when the things went down at the end and Bristol left him under the circumstances she did. I knew Grip would have a different vibe than Flow, but I was so addicted to these characters and their story that I jumped in without hesitating. Obviously, I didn’t like that they were separated, that Grip was trying and Bristol pushing him away. Why couldn’t they just get it together?

The first half(ish) of the book was a tough read for me. If you’ve followed my reviews for any length of time, you know how I feel about “other women” in books. When characters I love aren’t in the relationship I’m shipping, it’s pretty upsetting to me. To be perfectly honest, I’ve stopped reading books for less. But, there was something about Grip and Bristol, and despite the fact he was with someone else, I couldn’t stop reading. (Though I did admittedly skim a few of the scenes because… well, I wasn’t interested in reading about him getting with anyone else.) Thankfully, it was fairly easy to move through them and past them once Bristol’s stubborn self finally came to her senses. It was a very anti-Kim book in a lot of ways, but I still loved it. (The second half at least!)

Now that I’ve got that out of the way, I can talk about how much I loved the progression of Grip and Bristol’s relationship AFTER. I can’t really fault Grip for being frustrated with her and trying to move on, though he was never successful. I don’t have to like it, but I can’t blame him. But man, it tore at my heart to read about them apart. Once they were together again? It felt like (nearly) everything was right with the world again. Their chemistry, their passion, their love for each other was evident in nearly every scene. It was true romance.

As frustrated as I got with Bristol at times, I really did love her character. She was a strong, determined woman, but there was a fragility underneath it all. She had a very complicated relationship with her family and I think it’s fair to say she never felt like she was as loved as she loved others. This is also part of the reason she pushed Grip away. She was scared because she’d been hurt in the past. It seemed as though she was unable to trust and always waiting for the other shoe to drop. She built a wall around herself and was determined to not let anyone in. But, Grip finally got in.

I loved Grip. (The character.) The man was amazing. He was intense and his lyrics were amazing. Seriously, when you finally read the words for the song Bruise, which is referenced several times in the book, prepare to be floored. It was beautiful. His past had a lot of ugliness and pain and it definitely shaped him. If this was a run of the mill romance, I would probably have held a grudge about him and other women while he and Bristol were separated, but I let that go. Like I said above, it made sense in the story — even if it felt wrong. But I was comforted knowing it felt just as wrong to them as it did to me.

While the romance between Grip and Bristol was at the forefront during this book, there was SO MUCH MORE to this story than “just romance”. There were so many thought-provoking — and even downright disturbing — scenes dealing with race and racism. So many of Grip’s conversations with Bristol reminded me of conversations I have with one of my friends, when he talks about how he grew up and the things he’s seen. I like a book that makes me think and Grip did that. It wasn’t preachy or one-sided or “overly political” (for the people who might call that a bad thing), but it was a real commentary on the state of racism in our country. I’ve not been able to stop thinking about it since I finished, if I’m honest.

So, yes, I loved this book. It’s the kind of angsty book I can only read every so often, but my gods the feels. SO MANY FEELS. Of all varieties. But, at its core, Grip was a beautiful and unforgettable romance between two characters who were so different in so many ways, but alike where it counted. Kennedy’s writing is gorgeous. I’m kicking myself for not discovering her sooner. I was pleased with the ending of this book and even if a follow-up didn’t exist, I’d have been happy. But, I was also thrilled I was going to get more of these characters who found a way under my skin and into my heart.

It is real, and real is so rare, you can’t ignore it when you find it. You don’t give up on it.

“I look forward to making you come with my words alone.”

I don’t have to scan the room or search the crowd. She’s the compass in every room.

This heart of mine that has no borders, no bottom, no ceiling, would be crushed by the wrong man.

We splinter into a thousand pieces in her kitchen, becoming more together than we were apart. More than we were alone. With whispered promises and words of love, we exchange hearts.

“My heart broke loose on the wind.”

Have you read any of Kennedy Ryan’s books?
Do you think you’ll read the Grip series?