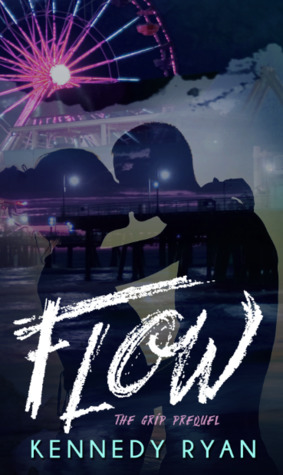 Flow by Kennedy Ryan
Series: Grip #0.5
Genres: Adult, Contemporary, Romance
Publication date: February 25, 2017
Publisher: Self-Published
Format: eBook, 130 pages
How I got it: I bought it!
Add it: Goodreads
Buy it: Amazon
My rating:

In 8 years, Marlon James will be one of the brightest rising stars in the music industry.

Bristol Gray will be his tough, no-nonsense manager.

But when they first meet, she’s a college student finding her way in the world, and he’s an artist determined to make his way in it.

From completely different worlds, all the things that should separate them only draw them closer.

It’s a beautiful beginning, but where will the story end?

I snagged Flow a couple months ago when it was on sale (or maybe free?) mainly because I loved the cover. I mean, the blurb sounded pretty good too, but the cover is definitely what caught my attention first. After reading (and loving) my first Kennedy Ryan book, Long Shot, a couple weeks ago, I decided I absolutely needed more of her writing in my life. I wasn’t really paying attention when I started Flow because, while I knew it was a prequel novella, I didn’t realize it was a two and a half book series. As in, I wasn’t going to be happy until I binged all three parts. But hey, there are worse things, right? Especially when the writing and characters are as amazing as these were.

Flow grabbed me from the very beginning. It was a short, quick read and I totally fell for both Grip and Bristol. They were both such strong and amazing characters. Their chemistry was intense from the very start and this novella provided a delicious slow burn I couldn’t get enough of. But there was so much more to this book than just romance. While, yes, that was an important part of the book, it wasn’t the only thing that stood out. The fact that he was black and she was white added a whole other level to the story. Grip’s POV was enlightening and I appreciated the openness of the conversations they shared.

While Flow made me swoon, it also really made me think. But more than anything, it made me desperate to get the rest of Grip and Bristol’s story, even though I suspected there would be parts I would not like. Novellas can be hit or miss for me, but this one was fantastic. If I’m honest, I’m kind of addicted to Kennedy’s words right now. Her writing has this beautiful, raw and honest quality to it that I just can’t get enough of. Good thing I had a weekend free to binge the rest of the Grip series. More on that soon.

You know that electric tingle people talk about? That thing that zips up your spine like a tiny shock when your hands first touch? That isn’t this touch. It isn’t electric. It’s something that… simmers. A heat that kind of seethes under my skin for a second then explodes into a solar flare.

“I can fight a dude who calls me the N-word. It’s harder to fight a whole system stacked against me.”

“I like the color of smart, the shade of funny, and sexy is my favorite hue.”

Have you read any of Kennedy Ryan’s books?
Which should I add to my TBR?