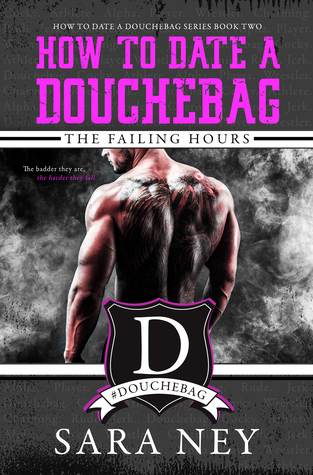 The Failing Hours by Sara Ney
Series: How to Date a Douchebag #2
Genres: New Adult, Contemporary, Romance
Publication date: September 21, 2017
Publisher: Audible Studios
Format: Audiobook, Length: 9 hours and 10 minutes
Narrator: Josh Goodman, Muffy Newtown
How I got it: I bought it!
Add it: Goodreads
Buy it: Amazon
My rating:

A total and complete jerk, Zeke keeps people at a distance. He has no interest in relationships—most a**holes don’t.

Dating?
Being part of a couple? Nope. Not for him.

He's never given any thought to what he wants in a girlfriend, because he's never had any intention of having one. Shit, he barely has a relationship with his family, and they're related; his own friends don’t even like him.

So why does he keep thinking about Violet DeLuca?
Sweet, quiet Violet—his opposite in every sense of the word.
The light to his dark, even her damn name sounds like rays of sunshine and happiness and shit.

And that pisses him off, too.

Let’s just get this out of the way: Zeke is a jerk. He’s the kind of jerk who is mean to little kids and makes fun of a girl who stutters… to her face. Believe me when I say I didn’t think I would ever find anything charming about him. I thought there was no way for him to redeem himself. Boy, was I wrong. Don’t get me wrong, he’s still super rough around the edges and he can be a real asshole, but he grew so much throughout the book. He also grew on me in the process.

Violet, however, I really liked from the very start. She was sweet and good and a really nice person. You know, the exact opposite of Zeke. Yet, the longer I read the more I found myself shipping them. I mean, I still I thought she was far too good for Zeke, but I hoped she could help him find a nicer, more caring guy underneath. The sexual tension between them didn’t hurt matters either. They had tons of chemistry. So as much as I found myself literally yelling at Zeke for being a dick, I was silently cheering the idea of him and Violet on.

I enjoyed The Failing Hours so much — so much more than I thought I would. Because of Zeke’s antics in The Studying Hours, I wasn’t exactly looking forward to reading his book. I knew he wound up with Violet because I read the series out of order, but I didn’t know if I wanted details. He was an off-putting character. Admittedly, I didn’t have high expectations for him, but he far surpassed them before it was all said and done. I actually really loved him and Violet together, once he got his head out of his ass and realized how great she was anyhow. This book hit me in the feels a couple times, but it was also funny and sexy (and yes, even infuriating). Boy did I devour this one.

This the first of the Douchebag books that I’ve read exclusively on audiobook. I think I did a really good job of finding the time to listen to this one in huge chunks, so I wasn’t tempted to chuck it aside and finish the ebook instead. I’ve said this in every review for this series, but I’ll say it again here — Josh Goodman and Muffy Newtown are excellent narrators. They do a fantastic job giving life to the characters in this series and Zeke and Violet were no exception. It’s truly a treat to listen to their performances.

I’m not gonna lie, I’m more than a little sad my Douchebag binge is over. This series was such a surprise to me. I’ll admit I judged it by its name first and decided I didn’t have any (reading) time to devote to douchebags. Boy, was I wrong. I mean, the guys in this series (minus Rhett) are NOT nice guys, but their growth makes it all worth while. I hope there are more books to come in this series — I don’t think I’m ready to give it up just yet.

“But you’re not jaded—not like me. I’m a beautiful mess. You’re just beautiful.”

“They say the bigger the man, the harder they fall. Well this is me letting you fall, Zeke. I can’t be there to catch you; I’m not strong enough to catch us both.”

Sara Ney is the USA Today Bestselling Author of the How to Date a Douchebag series, and is best known for her sexy, laugh-out-loud New Adult romances. Among her favorite vices, she includes: iced latte's, historical architecture and well-placed sarcasm. She lives colorfully, collects vintage books, art, loves flea markets, and fancies herself British.

Have you read any of the How to Date a Douchebag books?

Tags: Audiobook Review, How to Date a Douchebag, In Review, Sara Ney, The Failing Hours

One response to “Audiobook Review: The Failing Hours (How to Date a Douchebag #2) by Sara Ney”