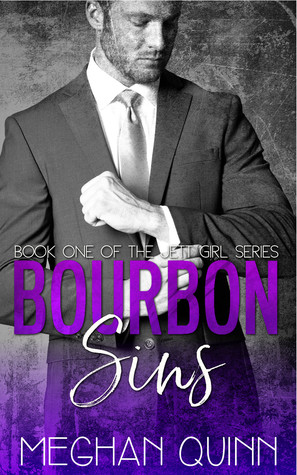 On the streets of New Orleans, sins are committed every night.

My name is Jett Colby and I save tarnished souls.

In the downtown, under the glittery lights of Bourbon Street, I found her in cheap lingerie, flaunting her body for callous men and money.

From the lace of her cheap lingerie, to her garter belt, I knew she had to be saved.
She had to be mine.

Broke and destitute with no way of out, she had no choice but to come to me and into my club.

She had no other choice but to become a Jett Girl.

But see, that’s the thing about this city; you might think that under the dazzling lights and illusion of salvation, she’s the one that needed saving.

When the glitter fades and the dirt is washed away, the one worth saving just might be me.

Y’all, this is book crack. It’s rare for me to stay up late to read, but Bourbon Sins made me do just that. I couldn’t stay up late enough to finish it the first night because, you know, work… but it was basically all I could think of the next day until I got off work and could sit down and finish it. I really was shocked I was as obsessed as I was because, honestly, I was a little worried going in if this book would be one I’d like. I’m one who tends to like my men of the one woman variety and shy away from books where the hero is more promiscuous than that. I’m really glad I decided to give this one a shot and trust Meghan, because I’m definitely digging this series so far. (In fact, I started the second book as soon as I finished this one. Book. Crack.)

Bourbon Sins has some interesting characters, beyond just Jett and Goldie. They are my favorites, however. If not for them, I wouldn’t be nearly as obsessed with this book. Goldie’s funny — if vulgar — and surprisingly vulnerable, too. Her heart is definitely in the right place. I found it pretty easy to connect with her. It did take me a little longer to warm up to Jett though. I feared at first he was a bit skeezy, using his money and power to take advantage of the women he took in. But that couldn’t be further from the truth. As I said above, I don’t like when a hero is having sexy with other women. I really don’t like reading those scenes, so I was relieved to find Jett changed his ways not long after Goldie came into the picture. As complicated as things were between them, it was easy to ‘ship them.

This book is HOT. Like, seriously freaking hot, fan-yourself-while-you’re-reading hot. As you might expect, a large part of this book revolves around sex. It does have more than that though. There’s some great character growth, particularly when it came to Goldie… and even Jett. There are also some seriously sweet moments in the this book. I really enjoyed the cast of characters, too. Everyone from Jett’s right hand man, Kace, to the other Jett Girls added to this story. It’s a fairly complex story, too. From the Girls to the relationships and Jett’s other business interests and everyone’s pasts? There’s a lot going on… but it works. It’s addictive as hell and the New Orleans setting is perfectly sinful and decadent and adds so much to the entire experience.

Bourbon Sins showcases a totally different side of Meghan’s writing and I’m really enjoying what I’ve read so far. Now it’s time to binge the rest of the series.

Kitten’s Castle, the premier location for any bachelor party, was located right on Bourbon Street, where sins were committed every night, but washed away by the most fantastic sanitation crew the next morning.

Music and sex were like peanut butter and jelly to me; they belonged together, and you weren’t doing it right until you fucked someone to a musical beat.

Born in New York and raised in Southern California, Meghan has grown into a sassy, peanut butter eating, blonde haired swearing, animal hoarding lady. She is known to bust out and dance if “It’s Raining Men” starts beating through the air and heaven forbid you get a margarita in her, protect your legs because they may be humped.

Once she started commuting for an hour and twenty minutes every day to work for three years, she began to have conversations play in her head, real life, deep male voices and dainty lady coos kind of conversations. Perturbed and confused, she decided to either see a therapist about the hot and steamy voices running through her head or start writing them down. She decided to go with the cheaper option and started writing… enter her first novel, Caught Looking.

Now you can find the spicy, most definitely on the border of lunacy, kind of crazy lady residing in Colorado with the love of her life and her five, furry four legged children, hiking a trail or hiding behind shelves at grocery stores, wondering what kind of lube the nervous stranger will bring home to his wife. Oh and she loves a good boob squeeze!

Did you read the Bourbon series back when it was Becoming a Jett Girl?