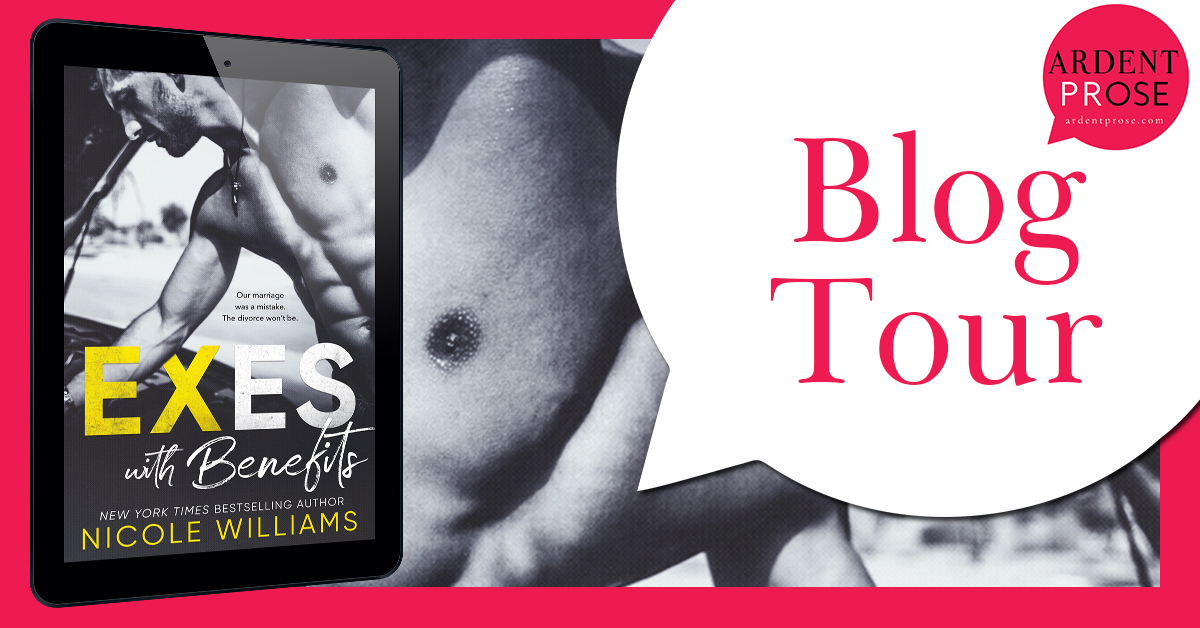 Welcome to my stop on the blog tour for Nicole Williams’ latest, Exes with Benefits! Check out the excerpt and my five star review below! I loved this one. 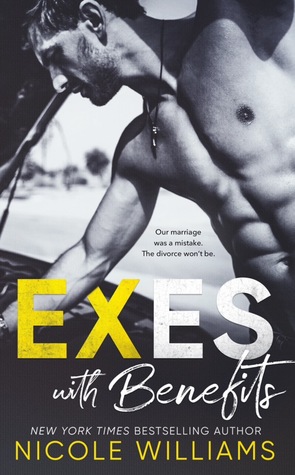 The only benefit I want from my ex is a divorce.

We got married for all the wrong reasons. The one thing we got right was our separation. I should have known better than to think I could bet on forever with a guy like Canaan Ford. Everything about him screamed impermanent, from his wild eyes to his restless soul.

When I left him and the small town I’d spent my whole life in, I swore I’d never go back. Never only turned out to be five years. Canaan claims he’s changed, but he hasn’t—same knowing smile, same rough demeanor, same body crafted from sin and sinew. And yet, something is different. He thinks this is his chance for redemption. My disagreement comes in the form of divorce papers dropped in his lap. He refuses to sign them. Unless . . .

He wants a month to prove himself to me—that’s his offer. One month to make me fall in love with him again and if I don’t, he’ll sign the papers. As much as I want to say no, I agree. I can suffer my ex for a short amount of time if that’s what it takes to be free of him once and for all. I fell for him once; I won’t make that same mistake twice.

He says we’re not over. I say we were over before we got started. Only one of us can be right, and I can’t let it be him. 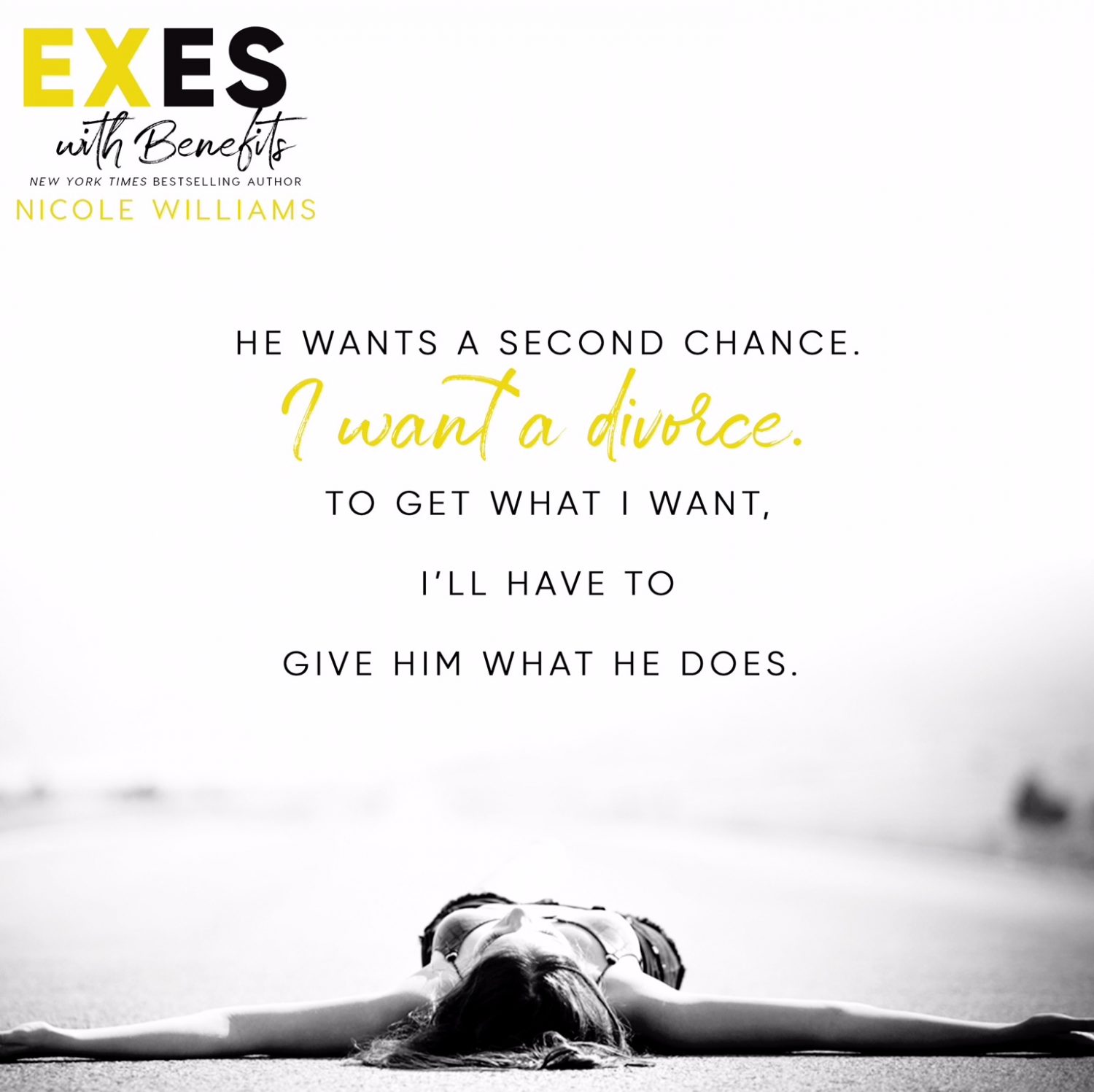 “One month. That’s nothing in the scope of a person’s life.” He slid a bit closer.

“One month is everything when it comes to opening myself back up to you.”

He didn’t argue that. He let silence speak for him instead.

“What exactly are you expecting during this one month?” I might have winced when I heard myself say those words.
He rubbed his mouth, trying to hide whatever was trying to form. “For you to give me another chance. For you to be my wife.”
The term made me nauseated. “Your wife? As in your indentured servant? No way.”
It was a smile he was trying to hide. Not very successfully. It made me thankful I’d slipped into these old boots so I could give him a solid kick in the ass if necessary.
“Like be willing to spend time with me. That’s it. That’s all,” he added when he correctly interpreted the question in my eyes. The question.
“What will we be doing during that time we’re spending together?” I pulled at the chest of my dress when I noticed the way his gaze had lingered there a moment too long.
His shoulder rose. “Got any ideas?” There was an unmistakable glint in his eyes.
“No,” I answered instantly.
“You used to have plenty of ideas for filling the time.” He took a swig of his Coke.
“And then I learned how to use my brain.”
He studied my fake smile, almost like he was contemplating what it would feel like against his mouth. “Dinners. Dates. Simple stuff like that.”
I held my best poker face, considering his offer. I didn’t want to stay married to him. If one more month was what it took to be free of Canaan Ford, I could suck it up. I’d already made it five years. “No expectations of anything of a physical nature?”
“If I remember right”—his eyes narrowed as he rubbed the back of his head—“it was generally you who instigated all of that back then.”
I shoved his chest. Bad idea. Solid. Firm. Home.
My jaw ground as I worked to erase that word from my conscious where he was concerned. “And you were just the perfect gentleman.”
Canaan snatched my hand before I could pull it away. Holding onto it, he dragged me closer. Not so close that our bodies touched, but close enough the separation was painful.
“Exactly,” he said in that low voice of his. The one he’d whispered my name in so many times as he moved inside me. “A gentleman gives his woman exactly what she needs. As many times as she need it. Just doing my part.”
“How noble.”
“That’s right. So if you want to make any changes to this one month agreement, consider me your humble servant.” When his hand dropped to my waist, his touch hesitant at the same time it was insistent, I didn’t flinch out of instinct the way I should have.
Instead, I had to remind myself to pull away from him; to flinch at his touch. “I have a boyfriend, Canaan.” Even to my ears, it sounded like a weak protest.
His hand didn’t fall away when I stepped back. “You’re a married woman, Maggie.”
“My husband forfeited his rights years ago.” My eyes found his, expecting them to shoot away once mine made contact.
They didn’t. His gold eyes held to mine. “He’s here to reclaim them.” 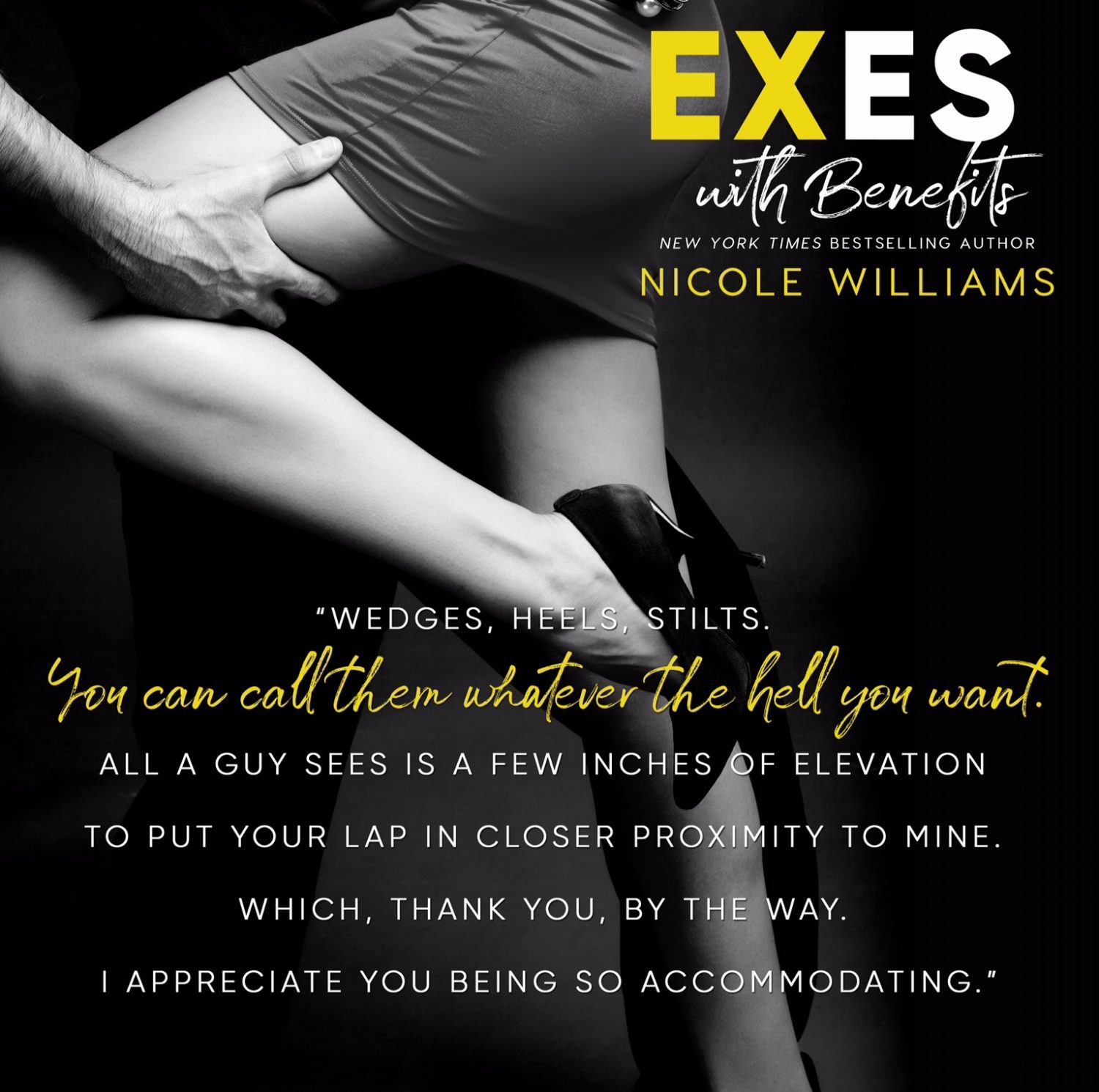 I fell in love with Exes with Benefits during the prologue. The raw emotions and pain damn near gutted me. Picture me on an exercise bike at the gym, holding back tears while reading this one. Needless to say, after about two chapters I decided this was a book better enjoyed in the privacy of my own home where I was free to feel all the feels. That’s exactly what I did. This book was gorgeous and I loved everything about it.

Man, did I love Maggie and Canaan. They were such wonderful, rich and complex characters. Maggie was a great heroine. She was strong and determined, yet not so hardened she came off as bitter. I’ll admit I was a little uncertain about Canaan in the very beginning. What was the root cause of all their problems? Why was she leaving him? Was he abusive? Were there other women? I was on Maggie’s side immediately, naturally, but it didn’t take long for Canaan to win me over. I’m not going to minimize the problems they had by any means, but thankfully the things I feared most were NOT what caused them. It helped that Canaan was obviously all in for Maggie. As determined as she was to move on from him, he was just as determined — or maybe more so — to prove he’s not the same guy he was five years ago when she left. There was something beautiful about the way they got to know each other again, all while remembering the better parts of their shared past.

I love Nicole’s books. Exes with Benefits is definitely high on the list of my favorites of her works. It was the total package — delivering a gorgeous second chance romance with humor and heart mixed with some serious steam and TONS of feels. I’m not saying I cried while reading this one… but I’m not saying I didn’t cry either.

Canaan was the best part of my life. And the worst. The best memories. And the worst. He was the high and the low and I was so damn tired of the sick cycle I thought would kill me one day.

We might have been good together, but we weren’t good for each other. I knew that now.

“You fight for what’s important. That’s the way life is. And you are worth every fight I have in me.”

“You’re staring.”
“I’m glaring. Big difference.”
“Glaring. Staring. I never was very good at knowing where I stood with you.”

“You know how I feel about you. You know I still care about and want you. That I still love you. More than anyone’s ever loved another person, but still less than you deserve.”

“I’ll teach him how to fight. You teach him what to fight for.” 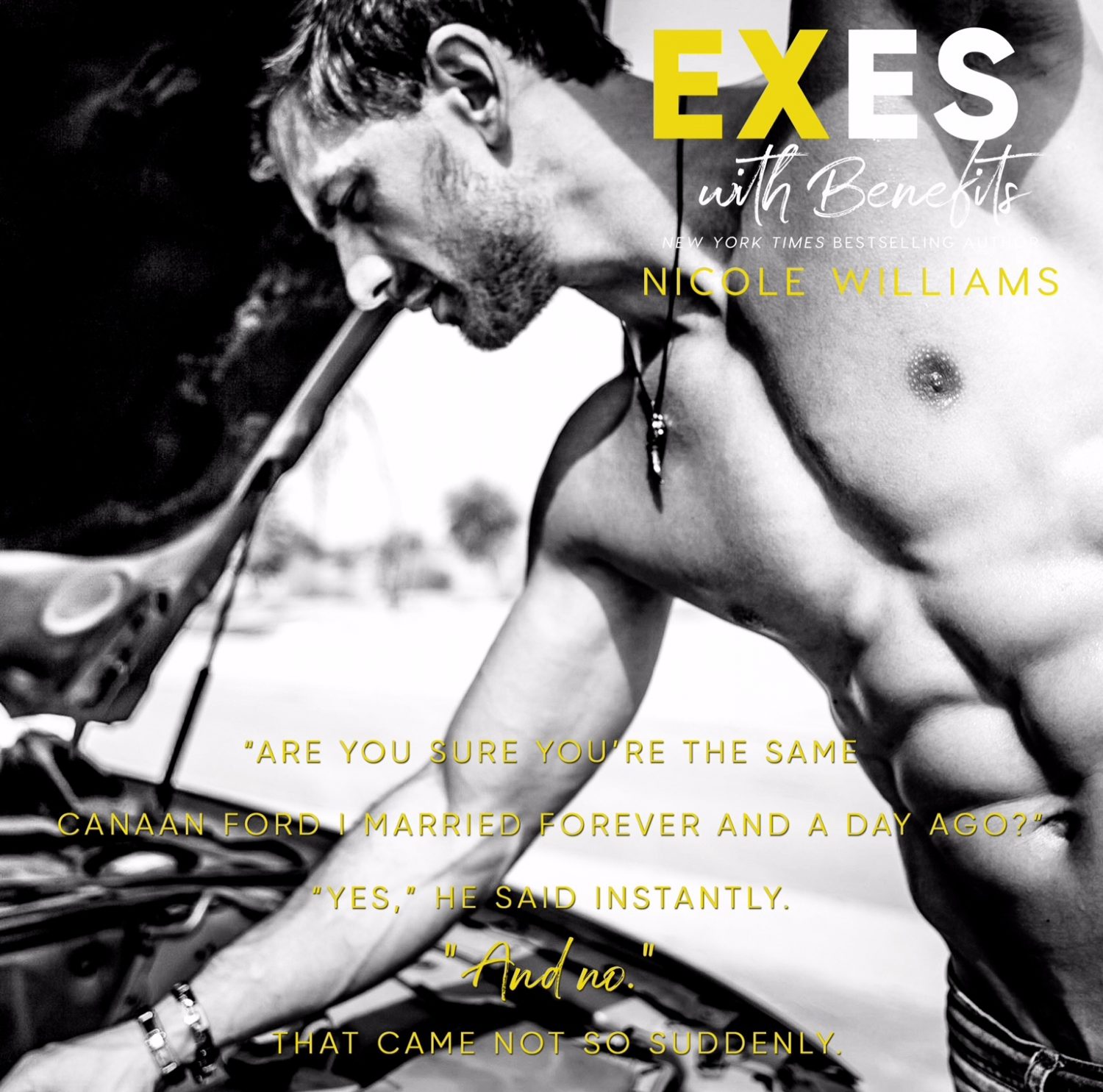 Have you read any of Nicole’s books?
Can you pick a favorite?