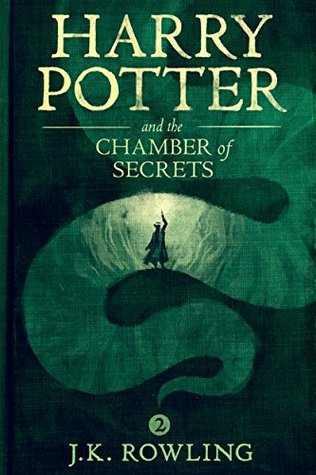 The Dursleys were so mean and hideous that summer that all Harry Potter wanted was to get back to the Hogwarts School for Witchcraft and Wizardry. But just as he's packing his bags, Harry receives a warning from a strange, impish creature named Dobby who says that if Harry Potter returns to Hogwarts, disaster will strike.

And strike it does. For in Harry's second year at Hogwarts, fresh torments and horrors arise, including an outrageously stuck-up new professor, Gilderoy Lockhart, a spirit named Moaning Myrtle who haunts the girls' bathroom, and the unwanted attentions of Ron Weasley's younger sister, Ginny. But each of these seem minor annoyances when the real trouble begins, and someone, or something, starts turning Hogwarts students to stone. Could it be Draco Malfoy, a more poisonous rival than ever? Could it possibly be Hagrid, whose mysterious past is finally told? Or could it be the one everyone at Hogwarts most suspects: Harry Potter himself?

Hey there! While I wasn’t successful in the Re-Read Challenge in 2016, I did find that I loved the recommended format of the reviews so I’ve decided to keep it for my re-read reviews going forward. It looks a little different than my typical reviews, and I’m ok with that. ?

I’ve read this book — and seen the movie — so many times that I remember all of it. These books helped shape who I am today so I think I’ll always remember them on a cellular level.

I wanted to re-read because it’s Harry Potter and it’s been ages since I re-read the series. I’ve watched the movies a million times this year alone. That’s barely an exaggeration, by the way. They’ve become my coping mechanism for 2017 and all the things going on in the world. That said, I feel like lately I have muddled the lines between the books and the movies, so I really wanted to get back to the original story. Plus, I’ve been dying to listen to the audiobooks for these because I’ve heard so many great things about the narrator. Who is, naturally, amazing.

Full disclosure: Harry Potter and the Chamber of Secrets will never be my favorite book of the series. I thought it was a dreadfully boring book the first time I read it and, honestly, it wasn’t until Half-Blood Prince that I understood its importance. It was better on future re-reads. Even if it isn’t the most action-packed book of the series, it lays the groundwork for so much of the story to come AND it’s beautifully-written, so I enjoy it. The audiobook was entertaining. It was nice to continue the series in the early, more innocent years since I know how dark things are about to get. I feel like, detail-wise, the movie for this one stayed pretty close to the book, so I didn’t have any big “Aha! That’s not how that happened in the movie!” moments. All that said, I’m ready to move onto book three.

Oh yes. I think I’ll wait until all the illustrated editions are out and do another reread then, in fact.

“I’ll be in my bedroom, making no noise and pretending I’m not there.”

“When in doubt, go to the library.”

“It is our choices, Harry, that show what we truly are, far more than our abilities.”

J K (Joanne Kathleen) Rowling was born in the summer of 1965 at Yate General Hospital in England and grew up in Chepstow, Gwent where she went to Wyedean Comprehensive. Jo left Chepstow for Exeter University, where she earned a French and Classics degree, and where her course included one year in Paris. As a postgraduate she moved to London to work at Amnesty International, doing research into human rights abuses in Francophone Africa. She started writing the Harry Potter series during a Manchester to London King's Cross train journey, and during the next five years, outlined the plots for each book and began writing the first novel. Jo then moved to northern Portugal, where she taught English as a foreign language. She married in October 1992 and gave birth to her daughter Jessica in 1993. When her marriage ended, she returned to the UK to live in Edinburgh, where "Harry Potter & the Philosopher's Stone" was eventually completed and in 1996 she received an offer of publication. The following summer the world was introduced to Harry Potter. The Harry Potter books have sold 400 million copies worldwide. They are distributed in over 200 territories and are translated into 67 languages.

Are you a Harry Potter fan?
How many times have YOU read the books?