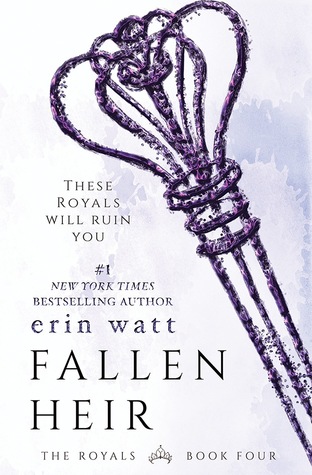 These Royals will ruin you.

Easton Royal has it all: looks, money, intelligence. His goal in life is to have as much fun as possible. He never thinks about the consequences because he doesn’t have to.

Until Hartley Wright appears, shaking up his easy life. She’s the one girl who’s said no, despite being attracted to him. Easton can’t figure her out and that makes her all the more irresistible.

Hartley doesn’t want him. She says he needs to grow up.

Rivals. Rules. Regrets. For the first time in Easton’s life, wearing a Royal crown isn’t enough. He’s about to learn that the higher you start, the harder you fall.

I thought I’d been ruined by the Royals before, but it turns out I didn’t know quite what “ruined” was. Until Fallen Heir, that is. Holy cow.

I’ve loved The Royals series since I first picked up Paper Princess. It’s totally cracktastic and I have to pretty much make time to read the entire book in one sitting because I do not want to put it down once I’ve started. Fallen Heir was a little slower for me, but that could be because it’s been ages since I’ve visited any of the Royals. It didn’t take me that long to get totally into the book though. Once I did, I was totally hooked and couldn’t wait to see where the story would take me.

My favorite thing about this book was getting to know Easton better. I had some pretty strong preconceived notions about him from his appearances in the first three books, but I don’t feel like I ever got to know him all that well. Now I can say that’s been remedied. There’s more to him than what he shows with his tough, arrogant, spoiled Royals exterior. There was a vulnerability there I didn’t really expect to find. I’m not sure I would’ve had it not been for Hartley either. I liked her. She reminded me of Ella in some ways, but I don’t think that’s a bad thing. I like Ella. Much like Ella, Hartley is poor and more or less alone, yet still sassy, strong and determined. I definitely liked the idea of Easton and Hartley together because I think they work well together, even with their differences.

I should’ve known better, but I thought this was a standalone book. I didn’t start to see the inevitable cliffhanger coming until I was at about the 90% mark of the book, when I realized there wasn’t enough time to get resolution on this story. The magnitude of the cliffhanger took me by surprise, too. My goodness. Let’s just say Cracked Kingdom CAN NOT get here soon enough. I’ll be counting down until January because I have LOTS of questions that need answers.

“My favorite rumor is that I’ve got a magic tongue—because it’s true. I’ll be happy to demonstrate for you at any time.”

No one has ever really needed me. Ella needed Reed. My mom needed pills and booze. The twins have each other. Hartley is alone. And there’s something about her loneliness that strikes a chord in me.

Have you been ruined by the Royals?