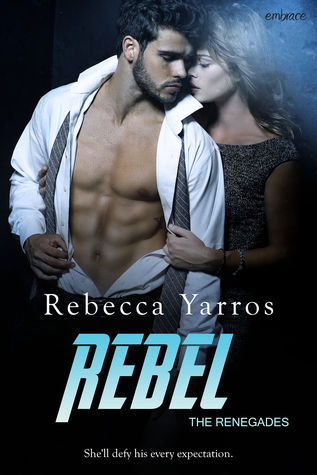 She'll defy his every expectation.

She’s the woman I met in a bar in Vegas.
The woman I illegally BASE jumped for.
The woman I spent one insane, incredible night with.
But now I’m screwed.
Or rather…not screwed.

Because the woman I can’t get out of my head is the one woman I can never touch again.
I’m Dr. Cruz Delgado—the youngest professor on this campus,
And Penelope Carstairs just walked into my class.

My gods, this book. After years of reading everything Rebecca Yarros writes, I’ve become fairly well accustomed to her wrecking me (in the best possible way) with every new release, but I couldn’t have predicted ALL THE FEELS she delivered with Rebel. It was absolutely perfect, one of my favorite books of the year so far. I wouldn’t change a single thing about it.

Rebecca is one of those authors whose releases I don’t even read the blurb for before deciding I want to read the book. Because of that, I had absolutely no idea the setup for this story. I knew it was Penna’s book and that alone was enough to give me total grabby hands over it. Once I started reading and realized it was a forbidden romance with a hot teacher, I couldn’t read it fast enough. It truly was a one-sitting read for me, as I devoured it in a matter of mere hours.

Penna has always intrigued me. She’s such a strong character, such a badass woman, but I always suspected there was more lurking underneath the surface. I wasn’t wrong. I loved getting a chance to see a more vulnerable, less self-assured side of her during this book. She is amazing, point blank. And Cruz? Oh. My. God. I was all in on him from their first meeting and NOT just because he was hot AF. Something about him made me want to learn EVERYTHING about him. What a guy. Seriously. He’s high up on my all-time book boyfriend list.

I won’t get into the nitty gritty about this story because you should experience it as I did — unspoiled. Rebel will take you places and give you plenty of feels along the way. Penna and Cruz’s chemistry was so intense, so irresistible that I knew it was just a matter of time before they gave in and I WAS HERE FOR IT. Of course, I also appreciated the chance to get more from the characters I loved from books earlier in the series — and a bit of a cameo from beloved characters from ANOTHER series we’re all acquainted with. I laughed, smiled, blushed and, yes, cried, during this one. Feels — of all varieties — for freaking days.

Rebel is a gorgeous book. I love Rebecca’s writing and the way she spins a story. I fall hard for her characters every single time and I’m with them for every experience, every feel. This book was no exception. Based on the epilogue — which was AMAZING — I think this is the last book in The Renegades series. I’d always kinda hoped to get more from Nitro, to be honest, but I can’t be angry this series has come to an end. I loved it from the time I picked up the first book. I can’t deny it went out on a strong note with Rebel. And that epilogue. *all the heart eyes*

Maybe I was damaged, a little broken, but I was still me.

Kissing Cruz made me feel borderline insane—every ounce of logic fled as he kissed my collarbone, and I became a creature of pure physical need.

“Your friends? All boys. Their little follower-Renegades? Boys. Jumping out of airplanes and flipping motorcycles doesn’t make you a man. Serving something larger than yourself, sacrificing for someone you love, understanding the nature of true suffering and working to alleviate it in someone other than yourself—that’s manhood.”

“I’m not blind. You look at that girl like she is the first drop of sunshine you’ve seen after a lifetime of darkness.”

Kissing Cruz brought me back to myself. No expectations. No stunts. No cameras. Just the one man who accepted me simply as I was.

Have you read The Renegades series?
If not, do you plan to?

One response to “In Review: Rebel (The Renegades #3) by Rebecca Yarros”