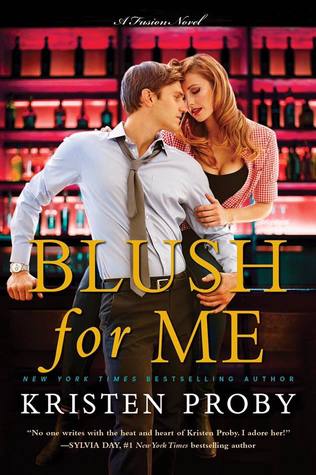 Blush for Me by Kristen Proby
Series: Fusion #3
Genres: Adult, Contemporary, Romance
Publication date: March 7, 2017
Publisher: William Morrow
Format: eBook, 320 pages
How I got it: I bought it!
Add it: Goodreads
Buy it: Amazon | Barnes & Noble | iTunes
My rating:

As the take-charge wine bar manager of Seduction, Portland's hottest new restaurant, Katrina Meyers is the definition of no-nonsense, and she isn't afraid of anything. Well, almost anything: she hates to fly. When she's forced to travel on a death trap with wings, the turbulence from hell has her reaching for any safe haven—including the incredibly handsome guy sitting next to her.

Ryan "Mac" MacKenzie hasn't been able to get his sexy seatmate out of his head. The way she clung to him stirred something inside him he didn't think existed: tenderness. As the owner of a successful wine touring company, Mac thinks he's got a handle on what life can throw at him and he's not prepared for any surprises, especially in the feelings department. And when he brings a tour into Seduction, he sees the petite spitfire he just can't forget.

Mac is determined to discover what else they have in common besides fine wine and the inability to keep their hands off each other. But what will it take for two stubborn people to realize that what they have is so much more than a hot chemistry between the sheets and to admit to falling in love…?

After loving Listen to Me and Close to You, the first two books in Kristen Proby’s Fusion series, I was really looking forward to reading Blush for Me when it was released. Unfortunately, it fell victim to my constant “too many books, too little time” struggle and sat unread for months. I’m glad I made the time to read it before the fourth book was released, however. It was a wonderful book and, quite frankly, I rather enjoyed the mini Kristen Proby binge.

Though it’d been awhile since I read one of the Fusion books, it didn’t take any time at all for me to fall right back into the groove of loving these characters. I love a good, strong female character and the Fusion series is overflowing with them. It’s a real treat. With each new book, I’m always thrilled to get the story of a character I’ve already fallen in love with and Kat was no exception. Her sexcation with Mac — and everything that ensued as a result — made for a great, enjoyable read.

Blush for Me pulled me into the story from the very start. I can relate to Kat’s fear/hatred of flying and I found myself wishing that I was seated next to a man like Mac sometime on a flight. Maybe that’d lead me to an amazing sexcation too. Haha. I guess what I’m really saying here is that the characters and story were relatable. Things also got hot REALLY early on, which seems a bit different for Kristen’s books, but it totally worked here. Sexcation, y’all. Kat and Mac didn’t have weeks or months with which to develop a thing. They clearly clicked from the start, and they had crazy intense chemistry. Which, naturally, made for smoking hot sexy times.

I enjoyed this book so very much. Kat and Mac’s story was wonderful and really low on the angst scale. There wasn’t a huge conflict in the book and I was more than ok with that. Sometimes it’s nice to just read about a couple and how they’re fitting into each other’s lives and not have ALLLLLL the drama. (Even though I do like the drama, too.) I’m here for the romance and Kristen delivered. I also loved getting to see more from some of my favorite characters in this series. I can tell you this much — I won’t be waiting to dive into the next book when I get my hands on it.

“Just kiss me while you fuck me, and I won’t be able to scream.”

I have to have answers all day long in my life. I like being with a man who easily, effortlessly takes control in the bedroom.

“These women are hard to resist. Of course, it goes without saying that if you hurt her, the rest of us will kill you and make it look like an accident.”

“Just don’t get attached. This is still a sexcation. Be the mature adult you are, and don’t get used to him, Kat. This isn’t fiction. Just because he looks and acts like those men in your romance novels doesn’t mean that really exists.”

Have you read any of Kristen Proby’s books?
Do you have a favorite?

One response to “In Review: Blush for Me (Fusion #3) by Kristen Proby”