Welcome to my stop on the review tour for Karina Halle’s latest release, Wild Card! If you’re looking for a hot, sexy and sweet second chance book, look no further! 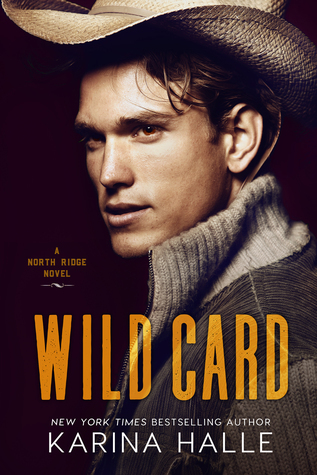 As the man in charge at Ravenswood Ranch, Shane Nelson has never been afraid to get his hands dirty. His sculpted physique isn't the product of a gym, but of years of hard labor under a relentless sun. His straightforward, alpha tendencies come from a man who knows what he wants and goes after it.

And what he wants is Rachel Waters.

They were childhood best friends, then teenage lovers who evolved into soulmates. But on one fateful night, Shane made a grave mistake, breaking both their hearts in the process.

Now, after six years, Rachel is back in the small, wild mountain town of North Ridge, BC.

Ready to face her past.

Ready to face his dark secret.

But is a second-chance at a one true love in the cards? Or will their wild hearts be broken once again?

Despite being a total romance addict, I’ve only ever read a handful of western romances. I really enjoyed the ones I have read and, let’s face it, I’ll read just about anything Karina Halle writes so I didn’t even hesitate to add Wild Card to my wishlist. I was lucky to get an early review copy of this one, but I was late getting around to reading it and she mentioned there were changes in her reader group, so I just bought an ebook and read that instead. No matter the format, I loved it. It was so easy to get lost in the world she built in North Ridge and especially in the characters.

Y’all know I love my second chance romances. It’s one of my favorite tropes. What Karina did with Shane and Rachel’s story was something special. It was complicated without being TOO angsty and I literally couldn’t put the book down. Karina has a way of pulling me into a story and holding tight until its over — and long after, to be honest. I do have a pretty wicked book hangover after finishing Wild Card, not gonna lie.

Shane and Rachel’s story was perfection. It was messy and gritty and raw, but it worked for them. (And me!) The feelings between them were strong and everything — good and bad — was magnified when Rachel returns to their hometown to help care for her sick mother. Their past is beyond complicated and, in the beginning at least, Rachel wants nothing to do with Shane. She’s still hurt by what happened between them and it doesn’t help that she doesn’t have the whole truth. But the pull between them is too strong to resist, thankfully. I loved the progression of this story and their romance. It was so realistic and not without some feels. Did I mention it was hot AF too? Because it totally was.

Wild Card is the start to a new standalone series and I am here for it. As much as I loved swoony Shane, I’m equally interested in getting his brother’s — Maverick and Fox — books. After the build up for Maverick’s book, also called Maverick, I can’t get my hands on it soon enough.

Loss of love is the most terrifying feeling in the world. It’s the feeling of your heart emptying, slowly being drained.

I need to taste her, messy, hot, and wild. I want her body, her touch, her soul, everything I once had and lost.

I know they say that you can’t go home again and in some ways, I think that’s true. Because when you leave, you change. But that doesn’t mean a place can’t be a home to you again, it just means it becomes a new one.

Do you enjoy Western Romances?
Any you’d recommend I try?