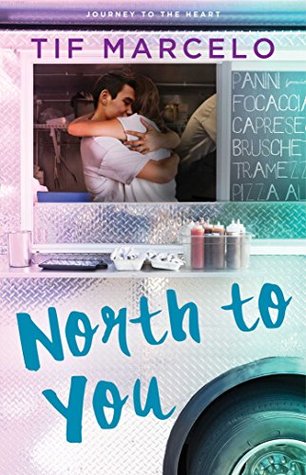 North to You by Tif Marcelo
Series: Journey to the Heart #1
Genres: Adult, Contemporary, Romance
Publication date: June 5, 2017
Publisher: Pocket Star
Format: eARC, 315 pages
How I got it: From the publisher
Add it: Goodreads
Buy it: Amazon | Barnes & Noble | iTunes
My rating:

In this warmhearted and charming debut from Tif Marcelo, a food truck chef and her long lost Army love clash when they cross paths in San Francisco.

Camille Marino has got a full plate. As the sole guardian of her eighteen-year-old sister and the head chef and owner of a food truck, she’s used to life being a juggling act. With food to cook, social media accounts to manage, and a little sister to look after, she doesn’t have time for much else.

That is, until Drew Bautista walks back into her life.

Drew is Camille’s former high school crush and he returns to San Francisco to repair his relationship with his father before he ships out for deployment. By helping his father renovate his failing Filipino restaurant, he hopes to win back his respect. But when sparks fly between Drew and Camille—his father’s major competition and sworn enemy—Drew is conflicted. Should he join his father in the war against her food truck? Or surrender to the woman who’s given him a second chance at love?

I enjoyed North to You so very much! It was so sweet and swoony and I loved the family dynamic on both Camille and Drew’s sides. It was such a great read. I’m gonna go on record here and say there need to be more romances that feature food truck owners. This is the second I’ve read in the last month or so and I loved them both. Both were also from new-to-me authors — and in this case, a debut author!

So, food truck aside… y’all know I love my second chance romances. That love is probably 70% of what made me pick up this book. The other 30% is split between the cover and the raving rec one of my fellow book-loving friends gave it. I did not want to put this book down once I started reading it. Camille and Drew were wonderful characters. Their reuniting “meet-cute” was charming and I loved getting a chance to know what happened in their past, while trying to also figure out if they had a future together. There were plenty of strikes against them — but there was absolutely no denying they belonged together.

I loved Camille and admired her strength and tenacity. Running a business is serious stuff and she was doing an admirable job, despite the setbacks that seemed to just keep happening. I really liked the relationship she and her sister had, which made Camille’s desire to help Ally off to school. She did wind up sacrificing a lot for her sister and I’d be lying if i didn’t admit it choked me up a bit. Drew’s relationship with his family was a little different. There’s quite a bit of tension there because his father doesn’t necessarily approve of his career in the Army. He believes he should be at home, running the family’s restaurant. But, there’s still plenty of love and respect there. I liked watching that father-son relationship develop over the course of this book nearly as much as I did the one between Drew and Camille. Plus, Drew was super freaking swoony and sweet, so that didn’t hurt any either.

The progression of the relationship between Camille and Drew just made me happy. It’s a huge part of why I enjoyed this book as much as I did. North to You has a whole lot of heart and delivered plenty of feels. It was sweet, swoony, sexy and even funny. The food truck vs. restaurant storyline made for a good story setup and was fun to read. I really enjoyed several of the secondary characters and can’t wait to see where Tif Marcelo takes this series. North to You was a wonderful debut, kicking off a series I’m already addicted to. In fact, I’m counting down the days until I can read the second book, East in Paradise.

Our kiss becomes combustible. Like fire, it spreads through me, all consuming. Our tongues crash and tangle. They spar like hunter and prey, neither backing down.

“Let me be the one who you hang on to, even for today.”

Our beating hearts become a unified metronome, bringing forth the silent words I haven’t been able to conjure.

Have you read North to You?
Do you think you will?

Tags: 5 Star Review, In Review, Journey of the Heart, North to You, Tif Marcelo

2 responses to “In Review: North to You (Journey to the Heart #1) by Tif Marcelo”