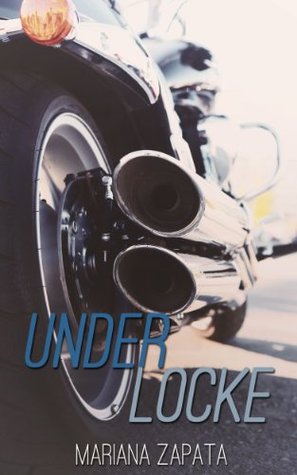 Under Locke by Mariana Zapata
Genres: Adult, Contemporary, Romance
Publication date: December 23, 2014
Publisher: Tantor Audio
Format: Audiobook, Length: 16 hours and 5 minutes
Narrator: Callie Dalton
How I got it: I bought it!
Add it: Goodreads
Buy it: Amazon
My rating:

He was my boss, my brother’s friend, a Widower, an ex-felon, and a man I’d seen casually with a handful of women. But he was everything that gripped me, both the good and the bad. Worst case scenario if things turned awkward between us, I could go somewhere else. I’d gotten over epic heartbreak before, one more wouldn’t kill me.

After moving to Austin following six months of unemployment back home, Iris Taylor knows she should be glad to have landed a job so quickly... even if the business is owned by a member of the same motorcycle club her estranged father used to belong to. Except Dex Locke might just be the biggest jerk she’s ever met. He’s rude, impatient and doesn’t know how to tell time.

And the last thing they ever expected was each other.

But it was either the strip club or the tattoo shop.

… she should have chosen the strip club.

Y’all, I finally finished Mariana Zapata’s Under Locke and I hate myself just a little for waiting so long to do it. I mean, in my defense I started it on audio ages ago, but I didn’t have any trips scheduled and audiobook time was hard to come by. And, if I’m being totally honest, I did have a bit of a hard time with Dex at first. That could very well be part of the delay — I wasn’t actively looking for audiobook time. Regardless of what the issue was, I finished it and I loved it and Dex totally won me over in the end. (Not that I had a LOT of doubt on that front.)

Both Iris and Dex were great, complex characters. Iris won me right from the very start. I liked her take no crap attitude and her dedication to her family. She was sassy and it worked. It did take some time for Dex to win me over, however. I’m not sure why, to be perfectly honest. Yeah, MC guys are always rough around the edges and they have a tendency to speak to women in a way that raises my own hackles, but I know this. I know that, unless they’re utter assholes — and Mariana Zapata doesn’t write assholes — they’re not really as misogynistic as they seem and they’re just really ALL alpha and protective. (Which isn’t a bad thing.) But, I digress… It took me awhile to bond with Dex, but it totally happened. I can’t even pick out one moment that did it, but there was SO MUCH MORE to this guy than what met the eye. I won’t go as far as to call him “swoony,” but he had his moments… and they were glorious.

I’m not going to get into the plot on this one, but there was more to this book than the romantic storyline. It had a little bit of action and some family drama, too. I found this one to have a little different pacing than Mariana’s books generally do, at least with regards to the romance. Don’t get me wrong, it still had the slow burn I love so much, but it wasn’t QUITE as slow this time. In other words, we get more hot and sexy times with Dex and Iris. *eyebrow waggle*

Despite how long it took me to get through Under Locke, I really did enjoy it. It was a solid 5 star read for me. When I had long periods of time in which to listen to the story, I was totally engrossed in everything happening. Callie Dalton did a great job with the story, as per usual. I’m pretty sure I’ll be rereading this one in the future, just like I have the rest of Mariana’s books.

Hot men went on my list of people who made me nervous and therefore had me acting like more of an idiot than usual.

“Baby, I’ve handpicked everythin’ and everyone in here. I know what I want and I get what I want. And I keep what’s mine.”

He looked at me for a long moment, a moment that stretched light years and galaxies. Time-wrinkled centuries and possibly eons. Generations—

I’d never been a big fan of that saying, “Everything happens for a reason,” but maybe, sometimes, every once in awhile, things coalesced into a complex, intangible reason. With tattoos and piercings and bad words and unfailing loyalty topped with a temper. And in its own imperfect way, it couldn’t have been any better.

“You’ve gotta be the best thing I never knew I wanted.”

Have you read any of Mariana’s books?
Do you have a favorite?

3 responses to “In Review: Under Locke by Mariana Zapata”