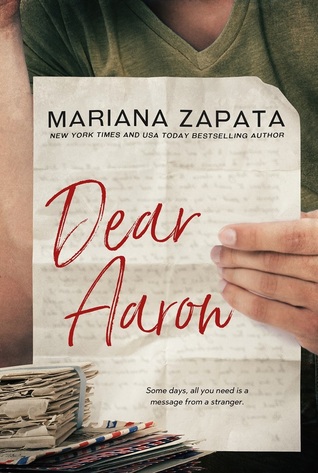 Ruby Santos knew exactly what she was getting herself into when she signed up to write a soldier overseas.

The guidelines were simple: one letter or email a week for the length of his or her deployment. Care packages were optional.

Been there, done that. She thought she knew what to expect.

What she didn’t count on was falling in love with the guy.

Confession time: I’ve been sitting on my review for this book for over a month now. I’m totally ashamed. The only excuse I have is that, honestly, I don’t know how on Earth to do this book justice with my words. I don’t really think I can. But, I suppose that’s no excuse not to try, right? So here goes nothing.

Y’all know I’m a huge Mariana Zapata fan. I might not have been reading her books for that long — just about seven months now — but I’ve read most of them multiple times and there are a few I consider on my “all time favorites” list. I love the amazingly delicious slow burn she delivers and, to be perfectly honest, that’s not something that’s ever really worked that well for me before. Up until I discovered her books, I’ve been all about the payout. Her books are just different. She’s the queen of the slow burn and I eat it up every single time. Her books are also smart and funny, sexy and awkward. I fall in love with her characters and, as soon as I’ve finished reading a book, I immediately want to read it again. And, sometimes I do. Ha!

Needless to say, I was over the moon when I realized we were getting a new book this summer. When it realized a couple days early, I freaked out and started reading it immediately… at, like, 5:30 in the morning. I happened to be on vacation in Pennsylvania, staying with my folks, and they looked at me like I was crazy as I carried my iPad from room to room, reading all the words as fast as I possibly could before I had to go actually do things later on that morning. I read about 60% of the book in roughly 4 hours. It just about killed me to put it down.

I was totally, 1000% in love with Ruby in the first few pages of the book. She had a great voice and I could relate to some of her struggles. What a great heroine! When she started emailing her pen pal, Aaron, I couldn’t wait to see where things would go. I found myself wanting to give him the benefit of the doubt early on, but I was getting frustrated with his lack of response. But once he did respond? I fell for him hard and fast, too. A large portion of this book is told through emails, instant messages and texts and, I’m not going to lie, I found myself cheesy-grinning through a large portion of it. It was such a great setup for a story that I even found myself wondering if I could get my own military pen pal. I mean, not that I’d be lucky enough for it to wind up like it did for Ruby, but the idea is still rather tempting.

I’m not going to go too deep into the story here because you really just need to experience it for yourself. I’d hate it if I said something to spoil it for you. You should be on the edge of your seat, swooning, just like I was. But this book? Man, I don’t have enough words to tell you just how much I loved it. It was equal parts fun and (a little) angsty, sweet and sexy. The banter between Aaron and Ruby was perfection and I really loved how they got to know each other on such a deep level through electronic means. There were also plenty of feels and, yes, tears were shed. It was a gorgeous book and it totally charmed me. I just plain loved it. So much so that I really need a new word to express that love. But anyhow.

I can’t wait for this one to release on audiobook so I can read it again. I’m truly tempted to reread the Kindle version because the story was so great. I highlighted roughly half the book — no lie — and even just opening the ebook to pull quotes made me want to read it again, right that very second. I’d love more Aaron and Ruby and can only hope that they’ll show up in one of Mariana’s future releases or that she writes a little something extra special about them down the road. So good.

Most guys want someone who has a big rack or a big butt, or at least think or act like they do, or they like funny, outgoing girls. I’m not any of those. It is what it is. I’m just Ruby.

I forget the dork doesn’t run strong in you.

RubyMars: You are a treasure I will value every day for the rest of my life.

If there was one thing I’d learned over the last few years, it was that just because you cared about someone, and just because they made it seem like they cared about you too, didn’t really mean a single thing at the end of the day.

“You could’ve told me your mom and sister are the ugly ones in the family.”

“You’re gorgeous. Like… the army should put you on their recruitment ads or put you as the face on their website. I feel like I can’t look you in the eye or I’ll turn to stone, and they’ll need to add my statue to a garden of other women who have made eye contact with you and lost their lives.”

“Mostly though, Rubes, I want to go back in time and beat every single person’s ass who’s ever made you doubt yourself, because the girl who makes me smile ’til my face hurts even on a shit day needs to see that in herself.”

“You’re my Ruby, and you have been for a long time.”

Have you read any of Mariana’s books?
If so, can you pick a favorite?
If not, what in THE WORLD are you waiting on?