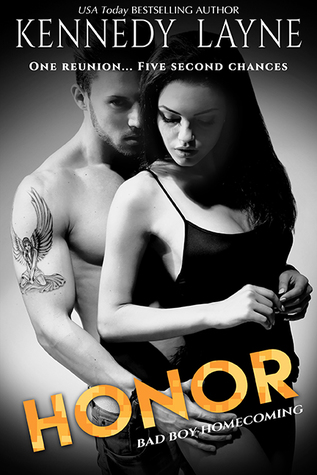 Derek Spencer hadn’t even bothered to RSVP to his Catfish Creek’s high school reunion. He’d been too busy fighting a war in Afghanistan in his capacity as a Marine and wouldn’t even be in the States during the event. Unfortunately, one emergency phone call from his mother changed everything.

Tessa Daniels had been voted most likely to do everything back in high school. She somehow didn’t think that included acquiring her very own stalker at the relatively young age of twenty-eight. It had stopped being simply annoying after someone broke into her house, invading her privacy. Now, she was actually in fear for her life.

Derek’s mother feels terrible that her son has spent almost every waking hour at the hospital, watching over his recovering father. She sets out—and succeeds—in arranging for Derek and Tessa to attend their high school reunion together. Neither one of them expected sparks to fly or memories of long-lost crushes to emerge, but they are not only faced with their newfound passion…they must also confront the person trying to extinguish their chance to rekindle the flames of past desires.

As was the case with the previous books in the Bad Boy Homecoming series, this one was a quick, smoking hot read. Following Avery Flynn’s lead in Trouble, it added a little darker, more suspenseful storyline to the mix. I really appreciated the extra bit of oomph it provided for the story.

Honor follows Derek, the military hero, and Tessa, the nurse heroine, as they get their second chance at romance. I really liked both of them and what was happening between them felt authentic. I liked that he was the one crushing on her hardcore in high school and how, with a little help from his meddlesome mother, they were going to their reunion together. They were both hardworking, genuine people who deserved a happily ever after. The biggest wrench in that plan, however, was that Derek was simply on leave and Tessa was up for a promotion of sorts at work, so there would come a time when distance would be a problem. But I was pretty sure they could figure something out. They were too perfect together not to.

As much as I really enjoyed the romance between these two, I also dug the stalker storyline. Yeah, I’m aware that’s a strange thing to say, but I’m owning it. Of course I didn’t WANT Tessa to have a stalker, but I did appreciate that it wasn’t a totally predictable storyline. I never did guess who was behind it until the big reveal. I don’t read a whole lot of mystery or suspense books, but I find that I enjoy them when they’re thrown into a good romance.

There were some feels with this book, particularly near the end. I soaked every single one of them up, too. Honor was a great addition to the Bad Boy Romance series. It was my first Kennedy Layne book, but it won’t be my last. I enjoyed her characters and writing quite a bit.

Kennedy Layne is a USA Today bestselling author. She draws inspiration for her military romantic suspense novels in part from her not-so-secret second life as a wife of a retired Marine Master Sergeant. He doubles as her critique partner, beta reader, and military consultant. They live in the Midwest with their teenage son and menagerie of pets. The loyal dogs and mischievous cats appreciate her writing days as much as she does, usually curled up in front of the fireplace. She loves hearing from readers.

Have you read any of Kennedy Layne’s books?
Which ones would you recommend I read next?