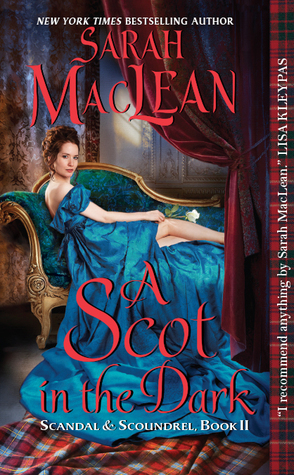 A Scot in the Dark by Sarah MacLean
Series: Scandal & Scoundrel #2
Genres: Historical Romance
Publication date: August 30, 2016
Publisher: Avon Books
Format: eBook, 400 pages
How I got it: I bought it!
Add it: Goodreads
Buy it: Amazon | Barnes & Noble | iTunes
My rating:

Lonesome Lily Turned Scandalous Siren
Miss Lillian Hargrove has lived much of her life alone in a gilded cage, longing for love and companionship. When an artist offers her pretty promises and begs her to pose for a scandalous portrait, Lily doesn't hesitate...until the lying libertine leaves her in disgrace. With the painting now public, Lily has no choice but to turn to the one man who might save her from ruin.

Highland Devil turned Halfhearted Duke
The Duke of Warnick loathes all things English, none more so than the aristocracy. It does not matter that the imposing Scotsman has inherited one of the most venerable dukedoms in Britain—he wants nothing to do with it, especially when he discovers that the unwanted title comes with a troublesome ward, one who is far too old and far too beautiful to be his problem.

Tartan Comes to Town
Warnick arrives in London with a single goal: get the chit married and see her become someone else's problem, then return to a normal, quiet life in Scotland. It's the perfect plan, until Lily declares she'll only marry for love...and the Scot finds that there is one thing in England he likes far too much...

Every time I read a historical romance novel, I think to myself “I should read more historical romance.” Somehow that never works out, unless I go on a massive binge. I love them, but I find they require a little more concentration that contemporary books and, to be honest, I don’t always have that level of concentration. So, despite loving the first book in the Scandal & Scoundrel series, this one has been sitting on my iPad just waiting to be read, for ages. I am glad I finally picked it up. There was a bit of a slow start, but I’m attributing that to the fact that it’s a historical romance and as I said above, I just read those differently. It definitely kept me turning pages and it finished on a really strong note.

Sarah MacLean is easily one of my favorite historical romance authors. I love her unconventional heroines — and heroes, for that matter. She has this great way of taking current (or at the very least, contemporary) events and putting them into a historical setting. Maybe it shouldn’t work as well as it does, but I love it. But her heroines are the real stars of the show for me. They’re unique to the time period. Their roles aren’t that of traditional regency women. They’re often fiery, sassy and stronger than expected. I don’t think I should have to explain why I love that like I do. Lillian was all of those things and I adored her because of it.

Once I got through the initial bumps with the book, I was all in. I was entranced by Warnick. As I said, I adored Lillian — even if sometimes she made me want to scream. I loved how things built between them and how it helped her character grow. This book was swoony, super sexy and charming. I grinned through the largest portion of it, loving everything that was going on. It was a totally enjoyable read. Now, I just need to read the third book ASAP, since part of my mind is still back in that time period with those characters. Another great historical romance for Sarah MacLean! I’m loving this series!

“My reputation is a ruined, because I am a woman, and we are not our own. We belong to the world. Our bodies, our minds.”

Do you read historical romance?
Who are some of your favorite authors?

One response to “In Review: A Scot in the Dark (Scandal & Scoundrel #2) by Sarah MacLean”