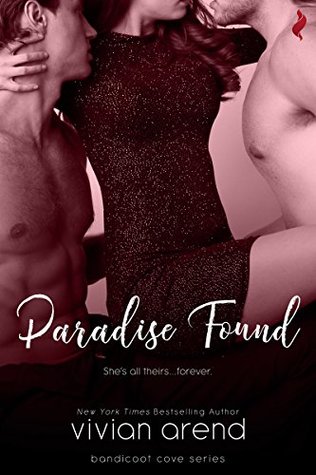 Paige’s two Australian lovers, Trent and Mason, have fulfilled her every fantasy over the past eleven months. A vacation on the exotic Bandicoot Cove Island resort will be a fitting end for what was supposed to be their no-strings-attached relationship. And she has to end it, because she’s broken the rules and fallen in love with both of her men. It’s better to leave them both than be forced to choose.

It's a delicate operation that'll require close attention to detail to take their paradise-perfect arrangement to the next level.

I enjoyed this novella SO MUCH. I felt like I was able to connect more with the characters than in the first book in this standalone series. Where, in that one, the three characters were coming together (*ahem*) for the first time during their trip to Bandicoot Cove — these characters had an established arrangement. I think that made it easier for me to believe and get behind.

I thought the character development was pretty good, for a novella. (Hey, there’s only so much you can do in 130 pages.) Paige, Trent and Mason were great characters. They were believable and so was the arrangement/relationship between them. They had tons of passion and their scenes were SUPER HOT. *fans self* But, more than that, there was an emotional connection between the three that made it easy for me to buy into this being real and not just a vacation fling.

How many more times would she have before this weekend was over? How many times to try and tell them without words how much they meant to her? Because falling in love had never been part of their agreement.

“I love how you look at me. As if I’m more delicious than anything you’ve ever cooked up in the kitchen.”

With over two million books sold, Vivian Arend is a New York Times and USA Today bestselling author of over 50 contemporary and paranormal romance books, including the Six Pack Ranch and Granite Lake Wolves.

Her books are all standalone reads with no cliffhangers. They’re humorous yet emotional, with sexy-times and happily-ever-afters. Vivian pretty much thinks she’s got the best job in the world, and she’s looking forward to giving readers more HEAs. She lives in B.C. Canada with her husband of many years and a fluffy attack Shitzu named Luna who ignores everyone except when treats are deployed.

Will you be taking a trip to Bandicoot Cove?