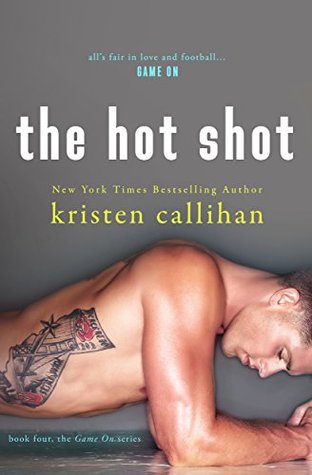 First we were friends. Then we were roommates. Now I want more…

What can I say about Chess Copper? The woman is capable of bringing me to my knees. I know this about five minutes after getting naked for her.
No one is more surprised than me. The prickly photographer my team hired to shoot our annual charity calendar isn’t my usual type. She’s defense to my offense, a challenge at every turn. But when I’m with her, all the regrets and darkness goes away. She makes life fun.

I want to know Chess, be close to her. Which is a bad idea.

Chess is looking for a relationship. I’ve never given a woman more than one night. But when fate leaves Chess without a home, I step up and offer her mine. We’re roommates now. Friends without benefits. But it’s getting harder to keep our hands off each other. And the longer we live together the more I realize she’s becoming my everything.

Trick is… Now that I’ve made her believe I’m a bad bet, how do I convince her to give this player a true shot at forever?

Somehow this book escaped my radar for a couple weeks after release. When I realized Kristen had a new book that I didn’t have and hadn’t read, I was really disappointed in myself. I’m usually better at keeping up than that. I purchased it right away, but then waited to make time to read it. Once I did I realized the delay was probably a mistake because, no lie, I have a new favorite Kristen Callihan book. I loved every little thing about this one.

Chess was a wonderful heroine. She was strong and smart and, I’m not gonna lie, I am TOTALLY jealous of her job. I’m a photographer. How do I get a job like that?! Dang. Finn was super sweet and hot and did I mention he’s one of my newest book boyfriends? Holy crap. I ADORED him. He seriously brought the swoons. As you all probably know by now, friends first books are my jam, so there was no doubt I was going to enjoy this one. Add in one of my newest favorite tropes — the roommates — and that made me enjoy it that much more. These two were absolutely addicting together. They gave good banter AND good feels. Plus, you know, off-the-chart HOT sexy times. Total package, anyone? (And no, I’m not just talking about Finn’s package. But hello!)

I think one of the reasons I enjoy Kristen’s books as much as I do — aside from the romance, of course — is that it’s obvious she’s a real sports fan. There are A LOT of sports romance out there, but they are not all created equal. I read sports romance because I’m a sports fan… especially when it comes to football. I live and breathe the sport once the season starts (and through a bit of the off-season, tbh) so I need a little *MORE* in my sports romance. Whatever that *MORE* is — and I have a tough time defining it — Kristen delivers. It makes her books and characters more relatable to me. It’s almost like a behind the scenes look at my favorite sport — but with kissing — and it just doesn’t get any better than that.

The Game On series just keeps getting better and better. It’s easily one of my favorite new adult romance series and I anxiously await to see if there will be more books. I’ve adored each of the characters, so I always enjoy the cameos (and sometimes more) from the characters in past books in each new one. This is some of the best of new adult. I can’t get enough.

That mouth. It’s the kind of mouth that makes you think about kissing. Lazy, languid, deep kissing. Frantic, tongue-fucking kissing.

Ignore the flutter. The flutter is a cheap attention whore.

“It’s been so long since I’ve had good sex, I swear I heard the mournful sound of ‘Taps’ coming from the vicinity of my vagina last night.”

“Love with your heart, not your head. Think about things too much and it all turns to shit.”

Are you reading Kristen’s Game On series?
Do you love it as much as I do?