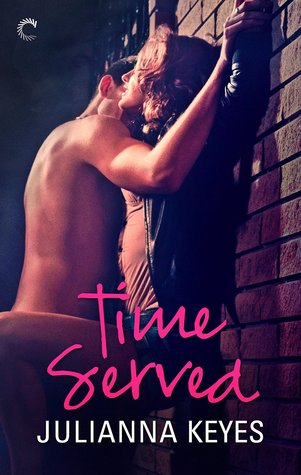 I've never forgotten how it felt to follow Dean—dangerous, daring, determined—away from the crowd and climb into his beat-up old Trans Am. I was sixteen and gloriously alive for the first time. When I felt his hand cover my leg and move upward, it was over. I was his. Forever.

Until I left. Him, my mom, and the trailer park. Without so much as a goodbye.

Now Dean's back, crashing uninvited into my carefully cultivated, neat little lawyerly life. Eight years behind bars have turned him rougher and bigger—and more sexually demanding than any man I've ever met. I can't deny him anything…and that just might end up costing me everything.

It’s been a little over a year now since I discovered Julianna Keyes’ Undecided and fell in love. Shortly after that I bought her entire backlist because I had the best of intentions of reading ALL of her books as soon as possible. Well, fast forward a year and I’ve finally read Time Served and holy cow. It wasn’t what I expected, but it was super freaking hot and I was flat out addicted to it! Sooooo good!

Time Served won’t be for everyone. It’s filthy hot. The characters aren’t particularly likable, at least in the beginning, but they had a way of growing on me. Dean and Rachel had a complicated past. He’s the person she left behind when she fled her hometown for a new life and she’s the woman he’s never really gotten over, yet has a lot of animosity towards. She doesn’t want to be attracted to him. He wants to take out his frustrations on her. Even though it took me some time to connect with the characters AND I spent a good portion of the book side-eyeing Dean because I really wasn’t sure what his end game was, I couldn’t get enough of this. Did he just want to humiliate Rachel? Was it all about sex? Did he still have REAL feelings for her? So many questions, yet still I wanted the two of them to work things out, twisted as that might’ve seemed at times. This isn’t your typical second chance romance — or at least it’s not like the ones I usually read! I think I liked it even more because of that.

Being totally honest, while I love dirty talk and I’m cool with kink, I did have a little bit of a hard time with how Dean chose to handle his frustration with Rachel in the beginning. It danced dangerously close to a line for me, but when it became apparent what he was doing actually was what Rachel wanted, I found it easier to accept. I just needed to know that he was in it to make her feel good and not just to get revenge. That’s an entirely different type of book and darker than what I tend to read. But this? It actually REALLY worked for me. The characters weren’t the perfect cookie cutter hero and heroine. They were complex and conflicted and had plenty of baggage. There was a fair bit of angst and I was feeling every single bit of it as I tried to figure out my feelings on the situation, too. But when it was all said and done? Fantastic. It took me on quite a ride.

I’m not sure what exactly I expected from Time Served when I started it, but it wasn’t what I got. It’s not often that an author can totally surprise me like Julianna did here. I’m a fan of the first book in this series and I can’t wait to read the next two!

I’ll be honest, I thought my days of spreading my legs for Dean Barclay were long over, and while my good sense tells me that that’s for the best, my legs are still eagerly parting like butter for a hot knife.

“I want to fuck you so hard you can’t possibly run away in the middle of the night again. Not until I’m done.”

“You might call the shots all day, but I call ’em at night, got it?”

“I hated you, Rachel. I hated you and I wanted you. And then I had you and I couldn’t do it. All of a sudden I didn’t feel the way I thought I would. I was so angry but I didn’t want to hurt you, I wanted to make you come. That’s what I wanted to feel. I thought maybe if I knew I could make that perfect little lawyer come for me, I’d feel better.”

Have you read any of Julianna’s books?
Which is your favorite?