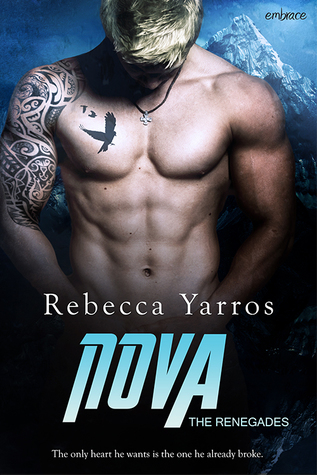 The only heart he wants is the one he already broke...

They say a girl broke him once—
That's why he's so reckless, so driven, so careless with his conquests.
But I'm that girl.
They can call me his curse all they want.
He and I both know the truth—
He's the one who destroyed me,
And I'm not the sucker who will let that happen again.

I’m not really sure why I didn’t devour this book on release day (or shortly after) as I usually do with Rebecca’s books. I am glad I decided to read it over the weekend as part of my “Read all the Rebecca books” binge, though… even if I was a little apprehensive going into it.

I honestly wasn’t sure that “Nova” would be able to win me over. In the early part of the book, the more I read about him and his manwhorish ways, the less impressed I was. But that all started to change when I — and Rachel — began to see him more as Landon than Nova. He really was a good, sweet guy, even if I didn’t  at all agree with the way he chose to self-medicate after he left Rachel. I found that I really liked Rachel from the start. I especially appreciated how she didn’t make it easy for him to get back in. She was extremely conflicted, but she stayed strong… until she couldn’t any longer.

Their breakup was a bit of a mystery in the book — and to me personally — for a large part of the book. If it was mentioned in Wilder, I guess I forgot the details. I remember the convoluted history they had with Wilder, but not the full story behind their breakup. It was obvious how much he cared for her — if you can look past his behavior after they broke up, anyhow — and she him, even though she was hurt. It was difficult to imagine what could’ve led them to break up . They complemented each other perfectly. The feelings were still there. They had plenty of passion. It just didn’t make any sense. Until it did, anyhow. Despite my initial misgivings about Landon/Nova, he definitely wound up hitting my best of the best book boyfriends list before I was finished with this book. I loved how he was all in for Rachel once she arrived. It was wonderful to watch them work towards a fresh start together.

Nova was a page-turner for me. I couldn’t get enough of the gorgeous writing, amazing characters, second chance romance (which you know is my jam), feels and more adventurous aspects. I’m still loving The Renegades and I can’t wait for the next book!

The problem with love was that once it was gone, there was no filling that hole, no substitute for that euphoria. Losing love came with withdrawal symptoms for which there was no known relief.

“Because what I want is for you to look at me the way you used to, no matter how impossible that seems.”

“You are anything but convenient. I’ve had parachute malfunctions more convenient than you. You’re the most frustrating, complicated, utterly addictive woman I have ever been around, but you are sure as hell not convenient.”