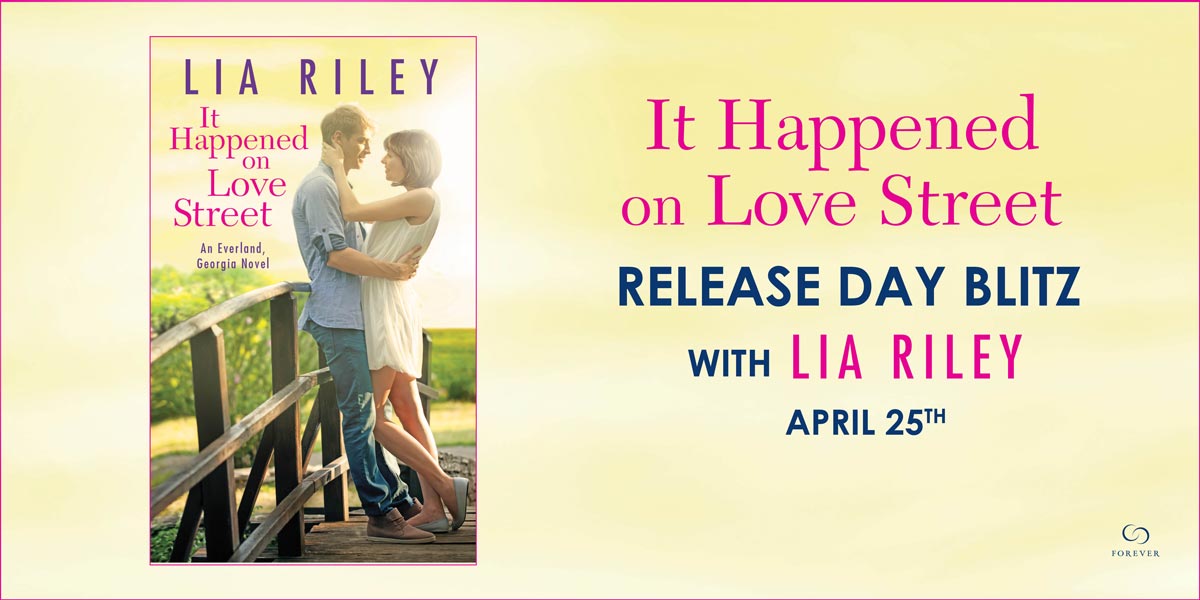 I want to wish the happiest of book birthdays to Lia Riley and It Happened on Love Street! If you enjoy small town, sweet and sassy romances, you’ll want to visit Everland, Georgia for sure. 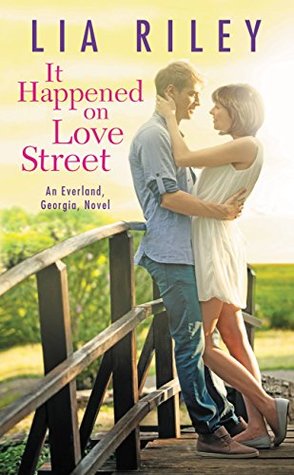 Publication date: April 25, 2017
Publisher: Forever
Format: ARC, 368 pages
How I got it: From the publisher
Add it: Goodreads
Buy it: Amazon | Barnes & Noble | iTunes
My rating:
Heat level:

The most romantic place she never wanted to be...

Pepper Knight moved to Everland, Georgia, as step one in her plan for a successful legal career. But after this big-city gal's plans go awry, going home with her tail between her legs isn't an option. So when the town vet-and her sexy new neighbor-offers Pepper a temporary dog-walking job, she jumps at the chance. No one needs to know that man's best friend is her worst nightmare... or that Everland's hot animal whisperer leaves her panting.

The last thing Rhett Valentine wants is to be the center of small-town gossip. After his first love left him at the altar, he's been there, done that. These days, life is simple, just the way he likes it. But sultry southern nights get complicated once sparks fly between him and the knockout next door. When she proposes a sexy, secret fling-all the deliciousness and none of the prying neighbors-it seems too good to be true. And it is. Because Pepper's determined to leave Love Street, and when she goes, she just might take his heart with her...

It’s pretty much no secret that I adore Lia Riley AND her books. Since I fell head over heels for her last small town romance series, Brightwater, I’ve been looking forward to seeing what she’d give us next. When I first saw her post the cover for It Happened on Love Street, the first book in her Everland, Georgia series, I knew it was going to be right up my alley. Or, you know, quaint Southern street, as the case may be here.

Everything about this book, the characters and the quirky small town charmed me from start to finish. It was a true joy to be in Pepper’s head throughout this book. Her honest awkwardness and hilarious inner dialogue made me smile and chuckle from start to finish. I found that I could relate to her in a lot of ways, so I connected to her and her journey on another level. Who hasn’t found they’re not sure where they belong a time or two in their lives? Pepper was a great and likable heroine. Rhett was super charming and sweet. There were swoons all around when it came to him. Sure he was locked down because of his past, but actually that just endeared him more to me. I’m glad we also got some chapters from his perspective, too. I enjoyed getting into his head and learning more about him and how he saw the world.

Pepper and Rhett, despite all of their differences — or maybe BECAUSE of their differences — were so great together. I wasn’t thrilled at first that they both insisted that things between them remained a secret, but I also understood. Life in a small town is interesting and Everland, Georgia was no exception. In small towns, people tend to think each individual’s business belongs to the town as a whole. I understand the desire not to be the topic of conversation. They might’ve been expiration dating, with Penny never planning to stick around Everland, but I just knew they had some staying power.

I love when a setting basically becomes a character in and of itself. That’s precisely what happened with Everland. Not only did the town’s quirky residents make for interesting backstory, but the town itself and its history did the same. It came alive in the pages thanks to Lia’s writing and attention to detail. It’s the kind of place that, when I’m sick of city life, I think I’d love to move to. I’m intrigued by the secondary characters (*cough* Tuesday *cough* Beau *cough*) and the townspeople themselves. Lia’s new series is off to a strong start and I can’t wait for more!

Better find a dentist. A year surrounded by this much sugary sweetness put her at risk of a cavity (or five).

Sooner or later, their gazes would connect in a crowded intersection and boom, a part of her soul would lock into his and that would be it. Cue the balloon drop. Blazing meteoroids. Unicorns dancing the fox trot. Rainbows—make that double rainbows—bursting over the cityscape. She’d plan a wedding in the Hamptons, stop hitting snooze on her biological clock, and have her own perfect life.

“Not every first love is meant to be your last.”

“Who are you and what have you done with my sister? It’s the romance here isn’t it? All the Love Streets and Kissing Bridges. A quintessential coastal Southern town up front, with the sexy, scurvy-dog pirates in the back. Put like that, I can see the appeal.”

“Tonight, I’m taking you so hard that you forget everything except for the fact you’re mine. That I’ve got you. That I’m here to keep catching you. Let go for once, see if you fall, or if you fly.”

“Everland’s not like anywhere else. There’s something in the air here. I like to think it’s magic.” 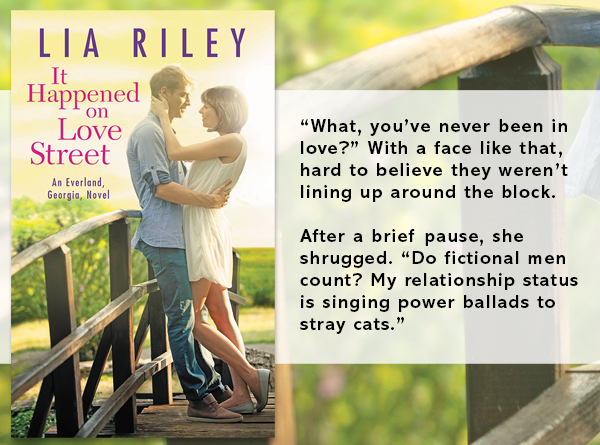 “Here’s an idea.” He nudged his finger on hers. “Say we—and this is purely hypothetically—enjoyed the . . . ahem . . .pleasure of each other’s company in the privacy of our homes.”

“Hypothetically, kept it casual and under the radar?”

She nudged back. “When I leave, there’s no heartbreak, no drama, and no one is the wiser.”

“Interesting theory?” He reached out, his hand splaying her knee. “Or recipe for disaster?”

Tingles shot up her thigh. His skin was warm, those fingers very big and very male. “I have enough to worry about with my future. If you don’t need me for more than a little here and now? I might be persuaded. Hypothetically.”

He moved his hand from her knee to the back of her neck. The touch melted her faster than an ice cube in the July sun.

“What are you thinking?” she murmured.

His deep blue gaze locked on hers and there it came again, that curious sensation of floating and drowning. “That I’d like to hypothetically kiss you.”

There was a sudden roaring in her ears, a whoosh of blood. “Well, there’s only one way to test a hypothesis.”

Slowly, oh so slowly, he dipped forward. His lips didn’t settle on hers like she expected. Instead, he kissed the center of her forehead, softly, experimentally. A tremble rocked through him.

The evening air was sultry, no a hint of chill. The idea that she shook this steadfast man sent a shiver of need through the join of her thighs, a throbbing shudder that swelled to an ache as he peppered a light trail of kisses down her temple, and then moved lower. He took his sweet time on her cheeks, treating her as something to savor, a delicious dessert you didn’t want to wolf in one bite. Tension spread through her body, pulling tighter and tighter, her belly doing a fluttery dips and dives.

When he finally reached her lips, it seemed reasonable to expect that the kiss would be as soft as the others. Silly. Because Rhett was full of surprises. He didn’t hold back, his tongue was greedy, insistent, and hungry. Their teeth banged together. A chair tipped over. They crashed against a table leg, sent it screeching across the floor.

“In theory, you’re a good kisser,” she gasped, tracing her lower lip with her tongue. The skin was puffy, aching.

“Let me experiment a bit more. The initial results are promising.” 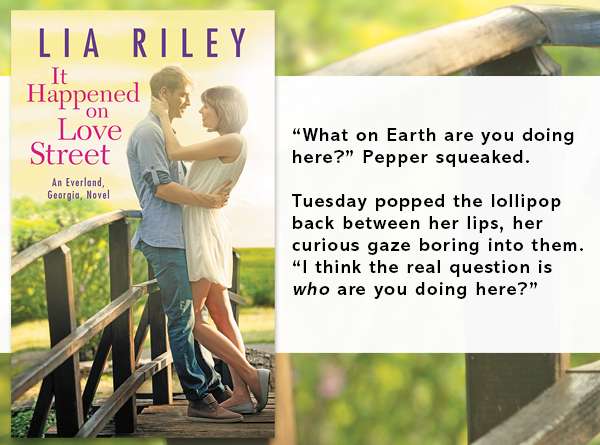 Have you read any of Lia’s books?

Do you have any small town romance recs for me?