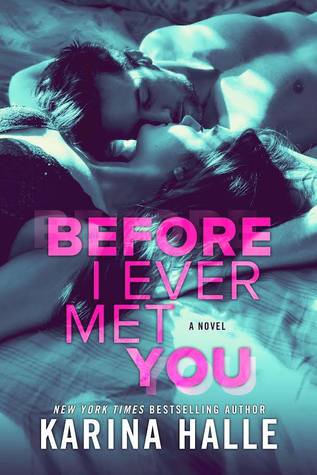 Before I Ever Met You by Karina Halle
Genres: Adult, Contemporary, Romance
Publication date: April 25, 2017
Publisher: Self-Published
Format: eARC, How I got it: From the author
Add it: Goodreads
Buy it: iTunes
My rating:

I first met William McAlister when I was just a teenager.

He was handsome, had a beautiful wife and was on the verge of success, having just joined my father as his business partner. Mr. McAlister was full of smooth charm, but back then he was barely a blip on my radar. Just a family friend.

Fast forward ten years: I’m 25 years old and a single mom trying to make things right for her seven-year old son. I’ve made some mistakes, grappled with my demons and now I’m back in the city of Vancouver, getting a second chance at a better life.

I’ve started by working for my father’s production company as an executive assistant. My first day on the job and I already know I could have a promising career there.

That is until I see Will McAlister for the first time in a decade.

Now recently divorced and as sophisticated as always, Will has gone from being my father’s friend and business partner to something so much more.

We’re both older, for one thing, and he just oozes this worldly confidence and stark sexuality. Combined with his tall, muscular build and sharp suits, strong jaw and bedroom eyes, Will has turned into one hell of a distraction.

A distraction I’m having a hard time staying away from, considering his office is right across from my desk and I work with him in such close proximity.

It’s just an innocent fantasy of screwing him on his desk, right?

It can’t ever be more because he’s my father’s best friend, business partner, and my boss.

I can always count on Karina to give me a beautiful, luscious, sensual romance and she’s absolutely done it again here with Before I Ever Met You. I’ve now read two May-December romances this month. Both of them featured a woman who gets involved with her father’s best friend. And believe me, I am in no way complaining about this. It’s a trope I haven’t explored much, but now I’m anxious to do more of it. If you have any recommendations, toss them my way. 😉 But, I digress. Back to the book.

It shouldn’t come as a surprise to anyone that I loved Before I Ever Met You. Will was absolutely amazing. He’s now on my all-time favorite book boyfriends (man crushes?) list. I fell for him early on and never once wavered in my affection for him — much the same way he never wavered in his for Jackie. I do love when a hero is all in and has eyes for no one but the heroine, even when things get a little rough. That’s, like, book crack to me. Will gets all the points and swoons.

Jackie was a fantastic heroine. I admired her strength and determination. She was a great mom. She’d had a tough time in the past thanks to an abusive ex, but she fought her way through it. I didn’t love that she was so adamantly anti-relationship, insisting that what was happening between her and Will was just physical, but I also understood. It’s tough to bounce back once you’ve been hurt the way she has. Will was a catch and they were perfect together, despite the age difference, and I just wanted her to grab him and never let go without being afraid of getting hurt or being worried about what her father would say.

Before I Ever Met You was low on the angst scale, which I appreciated. It had the potential to be angsty, what with both of their pasts and the nature of their relationship given their age difference and his friendship and business relationship with her father. It packed a punch when it came to feels, but it also felt a good bit lighter than others of Karina’s books. It was sweet, romantic, sexy AF and even funny at times. I swooned all over the place with Will and I cheered hard for them to make this thing between them work. My ovaries damn near exploded during the scenes with Jackie’s son, Ty, and Will. Feels. For. Days. *heart eyes*

Bottom line: I loved this book. It’s everything I want and expect from Karina’s writing and more. ALL THE STARS!

“What if I want you to think about me?” I whisper. “What if it’s all I’ve ever wanted?”

“I swear I’ll fuck you for hours, if you let me,” he whispers, mouth now at my ear. His voice is rough with urgency. “I’ll make you come until you can’t walk, can’t speak, can’t see anything but stars. But for now, I just need to come inside you. And I’m going to do it fast and do it hard. You got that?”

“We don’t even have to have sex. We can walk the dogs. Watch a movie. Hang out. I’m one hundred percent okay with that.”
“Really?”

“Ninety-seven percent okay with that. And I can jerk off that three percent later.”

They call it falling in love because eventually you hit the ground and this is where I am. On the pavement, blasted to smithereens.

“Love is a war and half the time you’re battling your own fucking self.”

Do you have another dad’s best friend story recommendation for me?

Tags: 5 Star Review, Before I Ever Met You, In Review, Karina Halle

One response to “In Review: Before I Ever Met You by Karina Halle”