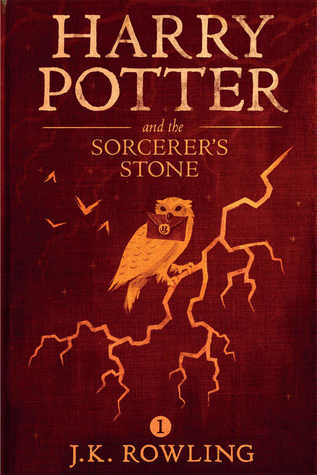 Harry Potter has never even heard of Hogwarts when the letters start dropping on the doormat at number four, Privet Drive. Addressed in green ink on yellowish parchment with a purple seal, they are swiftly confiscated by his grisly aunt and uncle. Then, on Harry's eleventh birthday, a great beetle-eyed giant of a man called Rubeus Hagrid bursts in with some astonishing news: Harry Potter is a wizard, and he has a place at Hogwarts School of Witchcraft and Wizardry. An incredible adventure is about to begin!

Hey there! While I wasn’t successful in the Re-Read Challenge in 2016, I did find that I loved the recommended format of the reviews so I’ve decided to keep it for my re-read reviews going forward. It looks a little different than my typical reviews, and I’m ok with that. 🙂

Everything? Always? Ok, that might be overstating things a little, but I’ve read the books and seen the movies so times that I swear this story is part of the fiber of my being. I can’t think of any part of the book that, even all these years later, made me go “Hmmm. Don’t remember that.”

It’s Harry Potter. Do I need to explain any further? 😉 I’ve wanted to do a re-read of the entire series for ages now, I’ve just not motivated myself to do it until now. I’ve settled instead for watching the movies over and over again. After my trip to The Wizarding World of Harry Potter in Orlando in March, I knew the movies would no longer do. It was time to get utterly immersed in the series again and what better way to do it than with Jim Dale’s amazing audiobooks?

I was full of warm, fuzzy feelings after re-reading. I was content because I’m back at the beginning of a magical journey and because I knew there’s a lot of story left ahead of me. It honestly felt like being back with old friends. While part of me knew I know the wizarding world and all of it’s incredible details inside out, I was actually kinda surprised to realize that’d remembered the first book as clearly as I did. Maybe it’s my (nearly) weekly movie binges, or perhaps because I’ve read this book roughly 9 times now. Regardless, it was a good decision to re-read and I’m happy I finally decided to jump in again.

Of course. I’ve already read the series multiple times. Why would I stop now?

“There are some things you can’t share without ending up liking each other, and knocking out a twelve-foot mountain troll is one of them.”

“It does not do to dwell on dreams and forget to live.”

“Fear of a name increases fear of the thing itself.”

“The truth.” Dumbledore sighed. “It is a beautiful and terrible thing, and should therefore be treated with great caution.”

J K (Joanne Kathleen) Rowling was born in the summer of 1965 at Yate General Hospital in England and grew up in Chepstow, Gwent where she went to Wyedean Comprehensive. Jo left Chepstow for Exeter University, where she earned a French and Classics degree, and where her course included one year in Paris. As a postgraduate she moved to London to work at Amnesty International, doing research into human rights abuses in Francophone Africa. She started writing the Harry Potter series during a Manchester to London King's Cross train journey, and during the next five years, outlined the plots for each book and began writing the first novel. Jo then moved to northern Portugal, where she taught English as a foreign language. She married in October 1992 and gave birth to her daughter Jessica in 1993. When her marriage ended, she returned to the UK to live in Edinburgh, where "Harry Potter & the Philosopher's Stone" was eventually completed and in 1996 she received an offer of publication. The following summer the world was introduced to Harry Potter. The Harry Potter books have sold 400 million copies worldwide. They are distributed in over 200 territories and are translated into 67 languages.

Are you a Harry Potter fan?
How many times have YOU read the books?

One response to “Re-Read Review: Harry Potter and the Sorcerer’s Stone (Harry Potter #1) by J.K. Rowling”