So, it’s been almost two weeks since I got home from Apollycon. I think it’s high time I do my wrap-up post, don’t you think?

I was so excited about Apollycon for so long, yet I scrambled to get my shit together at the last minute to leave. I totally blame my job for keeping me so busy. (Not that it’s a bad thing.) When I prepped for the last Apollycon in 2015, I’d been buying books for months. Well, that didn’t happen this time. I found myself trying to order books for Prime delivery from Amazon in the days before I left this time. Thank goodness most of the books I wanted to get signed were already on my shelves. And that I was doing the volunteer signing so I could snag the other books I needed before the real madness began!

If you read my Off to Apollycon post, you’ll know that a friend and I decided to drive to Orlando. Y’all, Orlando is FAR from DC. Just in case you were wondering. I’m still glad I made that decision because I really do hate flying and, let’s be totally honest, there is no way in hell I could’ve flown with all my books… especially after buying more onsite. This was by far the longest road trip I’ve ever done, but I still had fun. (My back and my right knee disagreed slightly.) One thing about road tripping with a fellow bookworm is that you can listen to an audiobook. We started off with Mariana Zapata’s Lingus and once we finished it, moved onto The Wall of Winnipeg. Both excellent choices, IMHO. 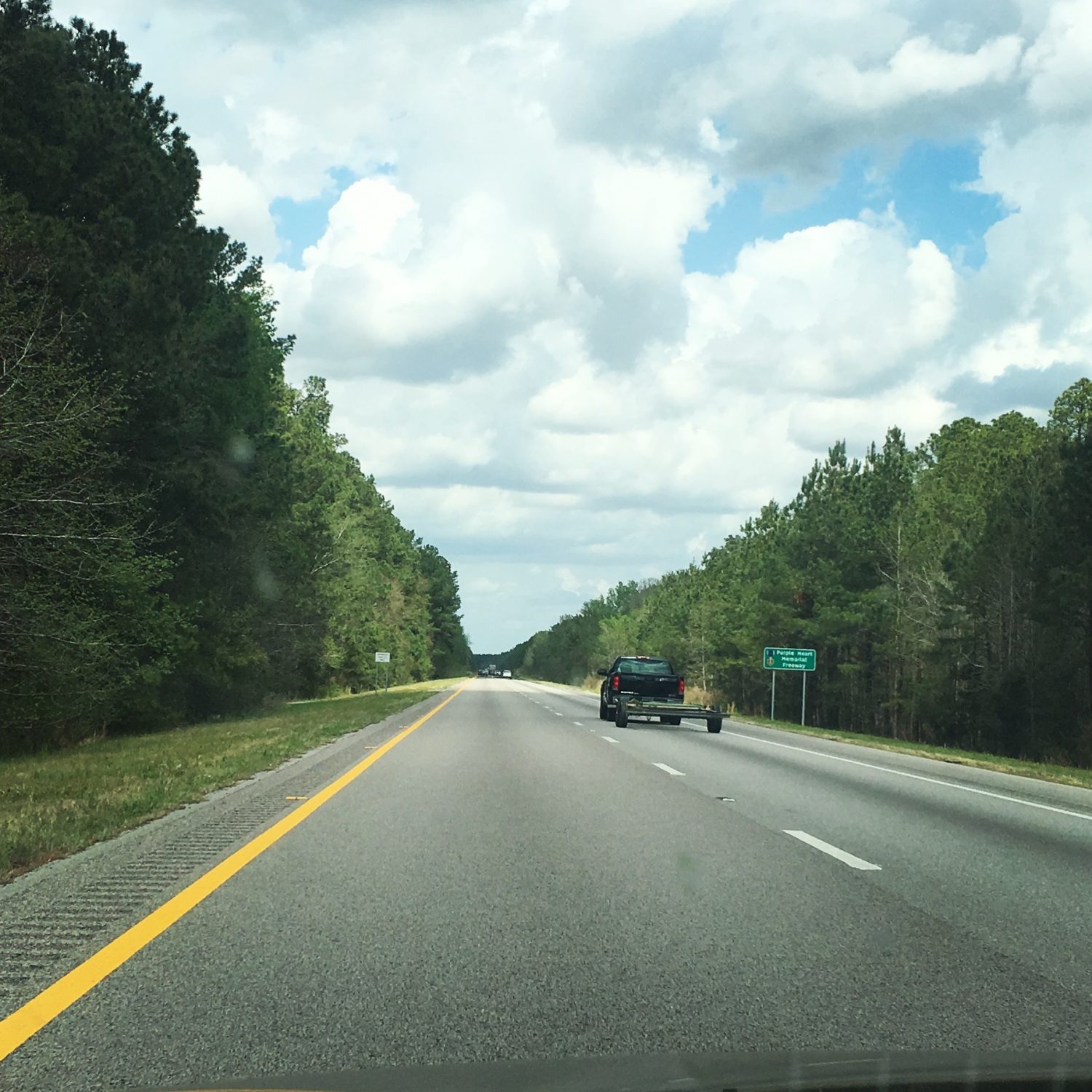 Which is to say the scenery wasn’t very interesting. At least the audiobook was good!

We didn’t drive straight through either day. I have a thing with allowing someone else to drive my car and I don’t think there’s any way I could’ve done that many hours of driving on my own. On the way down we stopped at just about the halfway point in Florence, SC. On the way home, we went as far as Smithfield, NC which only left us with 4 hours of driving the second day, which was perfect. By that time, I was so ready to get home… even if the vacation was amazing.

Thursday night was chill, but fun. We went out to dinner and then hung out at the hotel bar for a little while. I got to meet and chat with two of my favorite authors there — Chanel Cleeton and Lia Riley — as well as chat with other authors and blogger friends. The wine was pricey, but it was ok by me because I had fun while drinking it. Nothing too wild and crazy though, since I knew I needed to be up early on Friday to volunteer.

The signings went really well — and I was at three of them, so I should know! I loved the addition of the volunteer signing this year. I actually got all but three books signed in the hour allotted to volunteers. (But that was before I went and purchased more books during Titan… and the Saturday signing.)

I didn’t take many photos during the signings. I did my fangirling privately and didn’t need or want photo proof. Haha. With two exceptions:

Even though I worked both days, I still had ample time to get around the room and chat with everyone I wanted to. It was great meeting some of my favorite authors for the first time. In addition to Chanel and Lia, I got to meet Mariana Zapata. LOVE her books. (And her hair.) Also on the “meeting for the first time” list: Macy Beckett, Suzanne Young, Samantha Young and Christina (of Christina Lauren). I was also thrilled to authors I’ve met before again — JLA, K.A. Tucker, Karina Halle (even if I didn’t have books for her to sign), Jay Crownover, Jen McLaughlin, Megan Erickson, Tessa Bailey, Katee Robert, Brighton Walsh… Way too much fun.

I know y’all are interested in the book haul… When it was all said and done, here’s what I came home with: 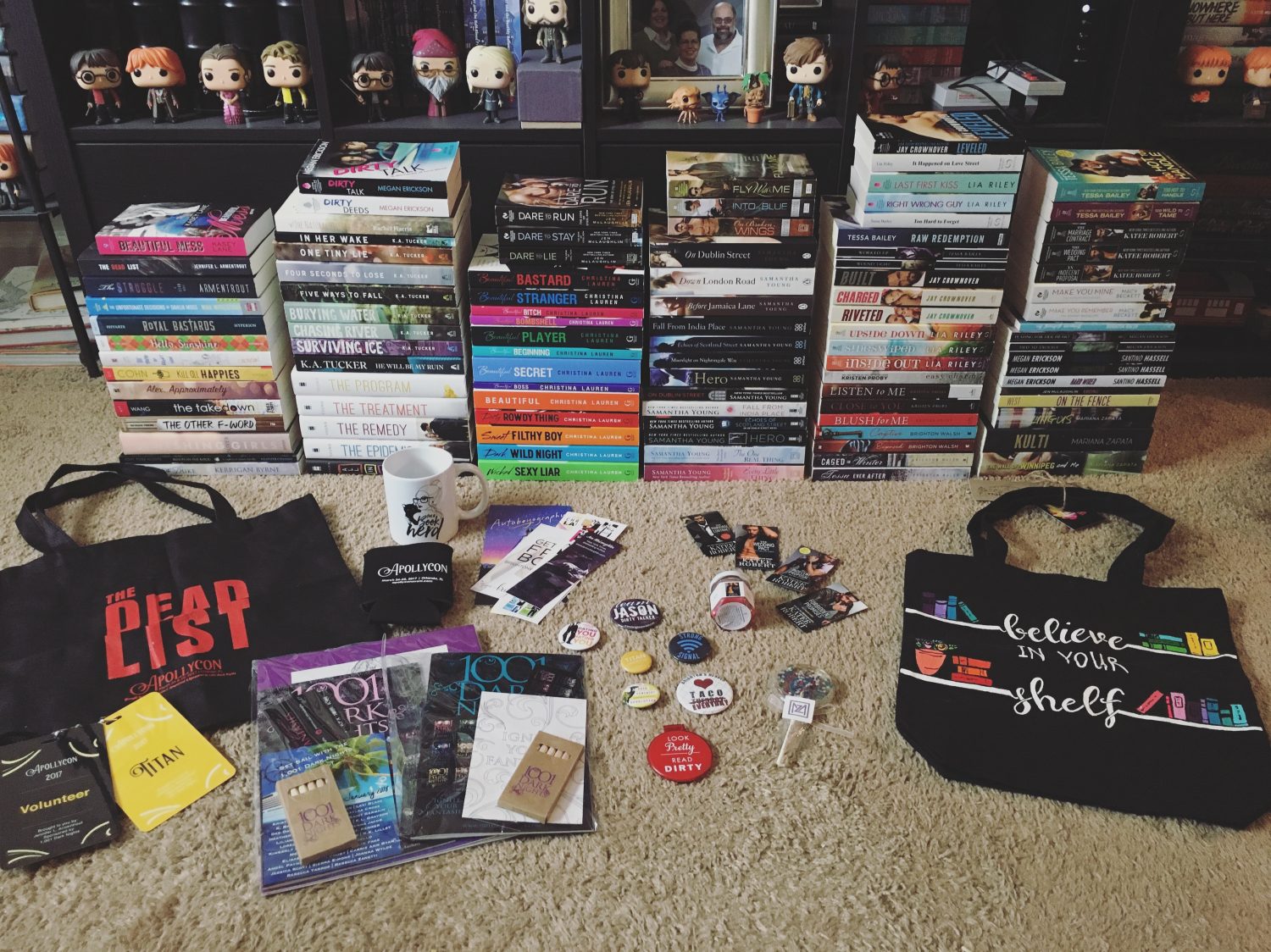 See why I chose not to fly? Haha!

Let’s break down the piles. The one on the far left is all freebies or swag bag goodies. (As are all the pins, mugs, magnets and whatnot on the left side of the photo.) The four stacks in the middle were the books I took with me to Orlando. Again, most of which were just sitting on my shelves waiting to be signed for ages now. I probably bought 8-10 of them right before the signing. The last pile is all books I bought onsite. It looks like a huge pile, but in my defense, two of the three Mariana Zapta books are HUGE and thus make the stack look higher. (Excuses, excuses.) I also bought the Believe in Your Shelf tote from Pivot Book Totes because I just adore Becca and couldn’t pass it by!

Friday night I headed over to the City Walk at Universal with some author friends, bloggers and readers. I can’t tell you the last time I laughed as hard as I did that night. Just look at this crew: 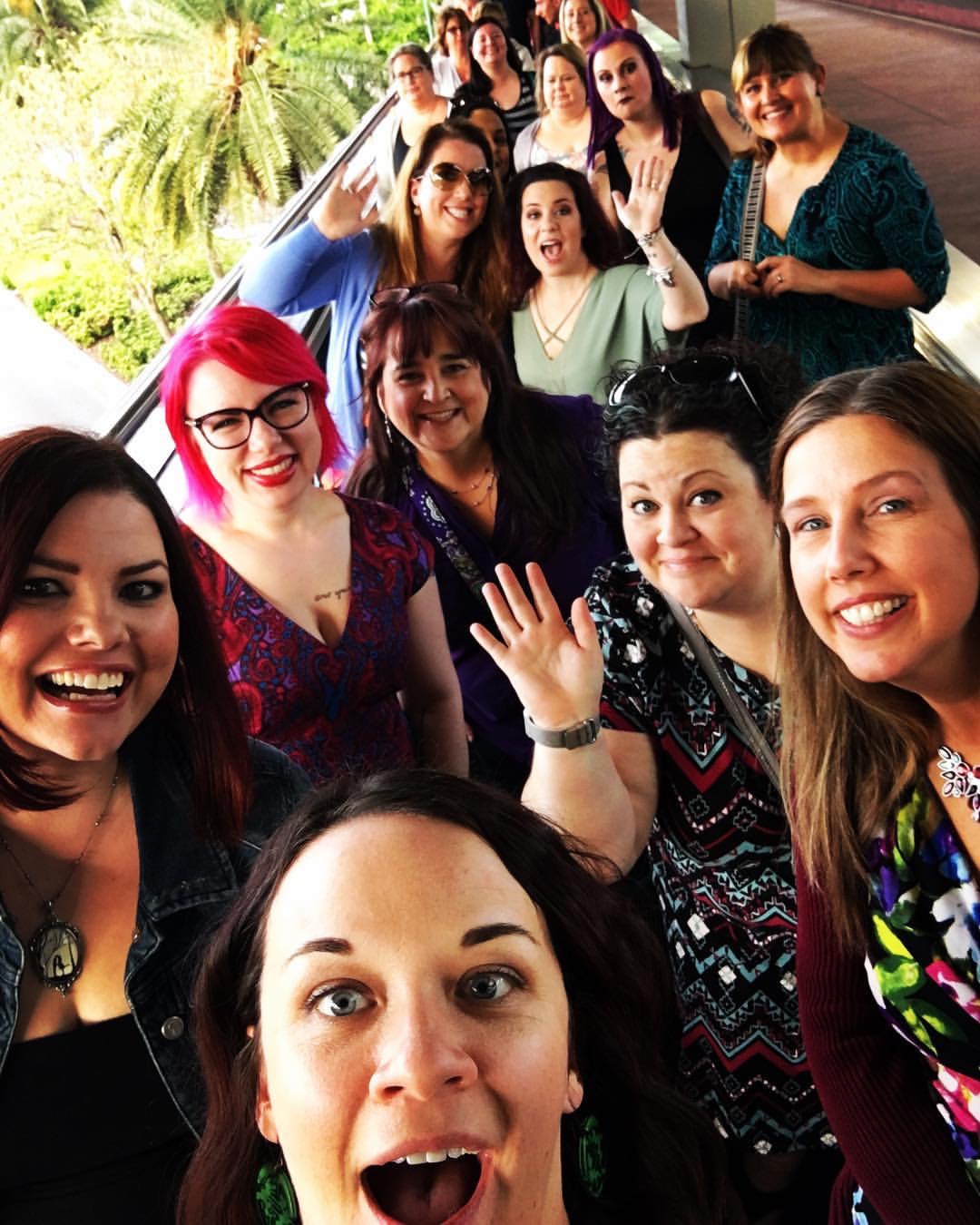 Then there’s the Hard Rock souvenir photo. I love everything about this. 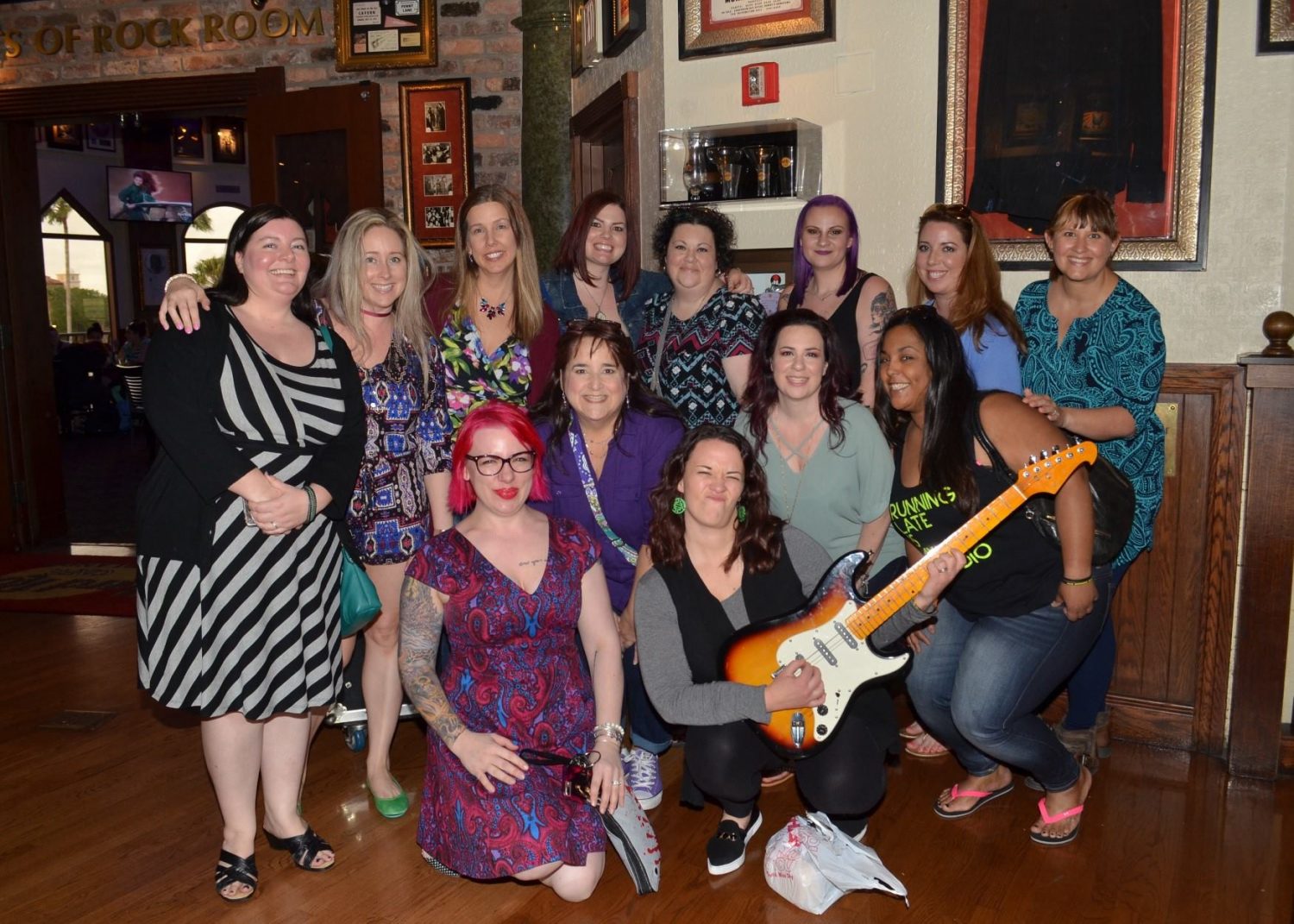 It was one hell of a fun night before the craziness we all knew would be waiting for us at Saturday’s signing. (And I mean craziness in a good way.) 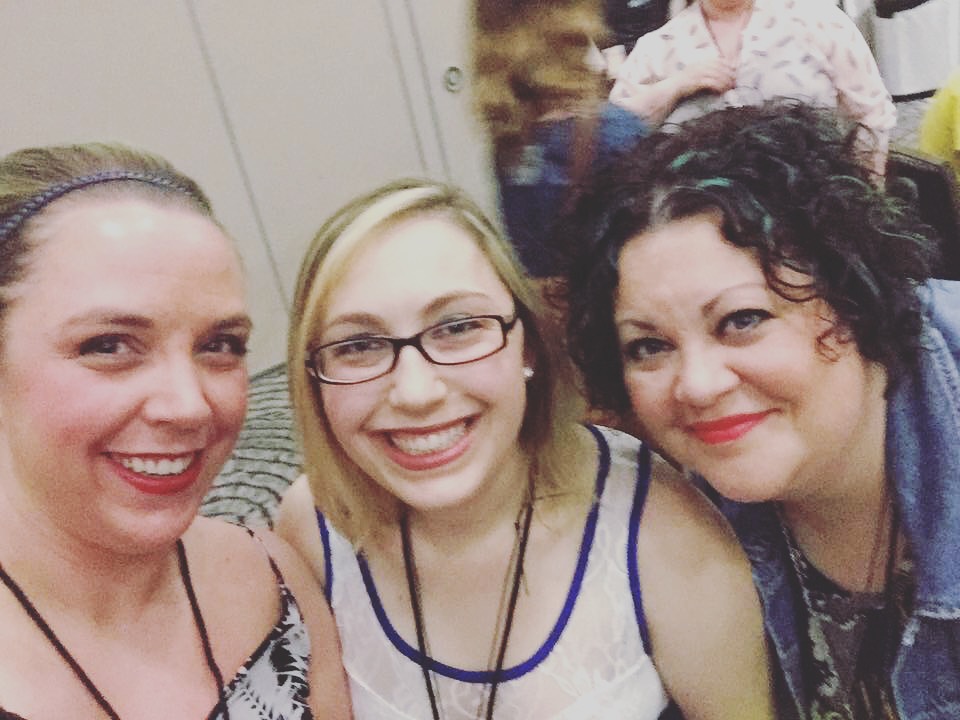 One of the other highlights of my time in Orlando was The Wizarding World of Harry Potter. Come on now, is anyone surprised? I’m still in absolute awe when I think about that place. It was perfect. I opted not to ride any of the rides — except the Hogwarts Express, obviously — because I didn’t want to run the risk of motion sickness spoiling the fun, so I got to spend a lot of time walking around exploring and taking photos. This is only a small number of the photos I took that day. I literally have at least 100 more on my phone, just waiting for me to post them.

Even though I was absolutely worn out from two days of driving, two days of signing and/or volunteering, it was totally worth it to push that aside, get myself some good caffeine and go to The Wizarding World of Harry Potter. It was even more fun because I was with friends who are every bit the HP geek I am. My wallet is still weeping, but that’s ok. It was worth every single penny.

We had grand ideas of leaving the park early, heading back to the hotel to recharge ourselves and our phones and then go back after dinner. Well. That didn’t happen. We were all wiped. We hadn’t packed. We were all leaving early on Monday morning. So we decided to have dinner at a sports bar down the road — a dinner I have NOT stopped thinking about since I had it. Miller’s Ale House. Zingers flatbread. That’s all I need to say. If you’re in Orlando — or at one of their other locations — just do it. You won’t be sorry.

What a trip guys. As ready as I was to get home to my bed and my cats, I was sad to leave, too. Regardless, we got an early start on Monday morning. We had a lot of ground to cover before we’d get to Smithfield, NC, our stopping point for the night. We also had to leave plenty of time to explore the wonder that is South of the Border. OMG y’all. It’s the tackiest place I’ve ever seen in my life. So many things to look at. 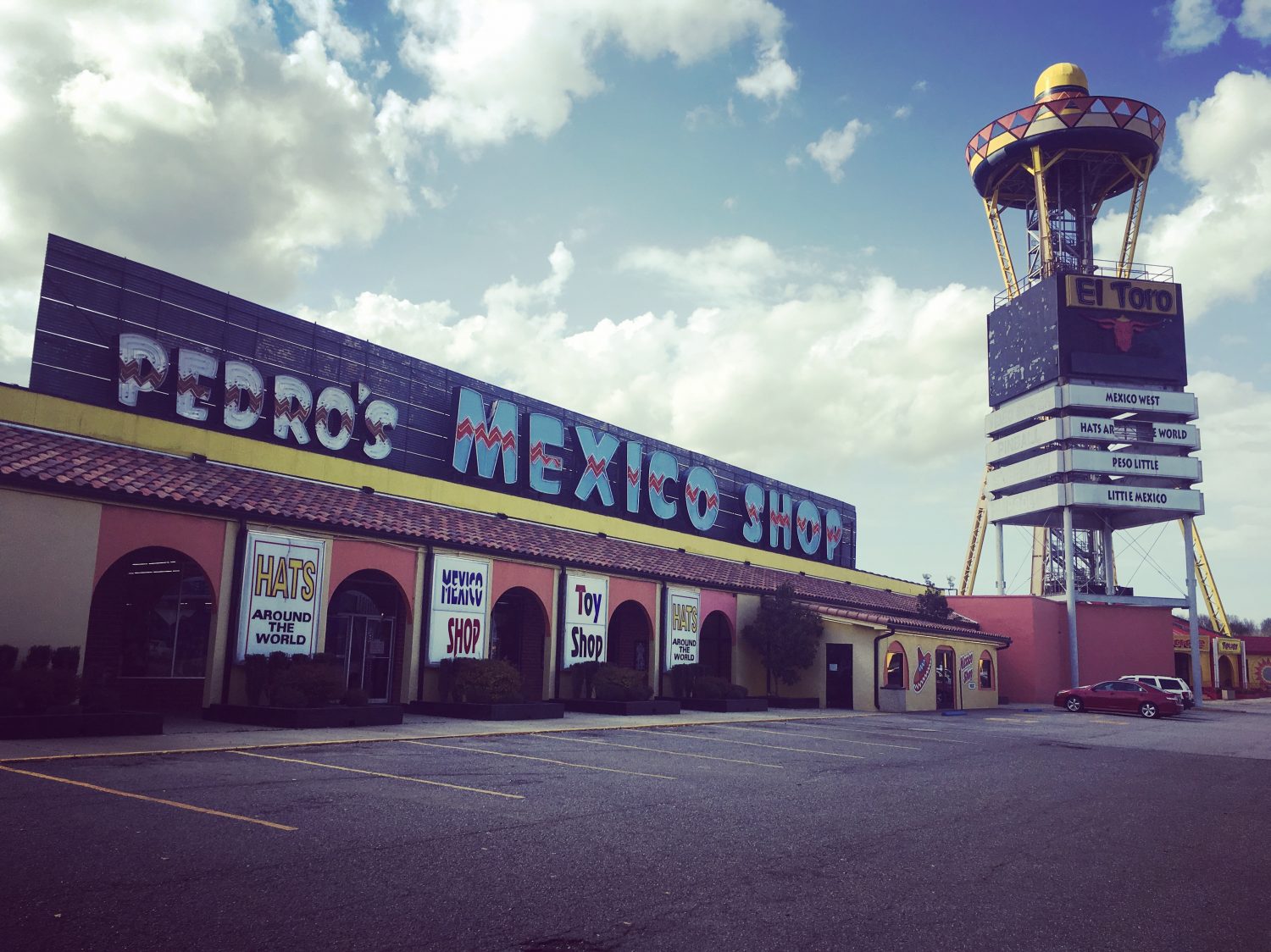 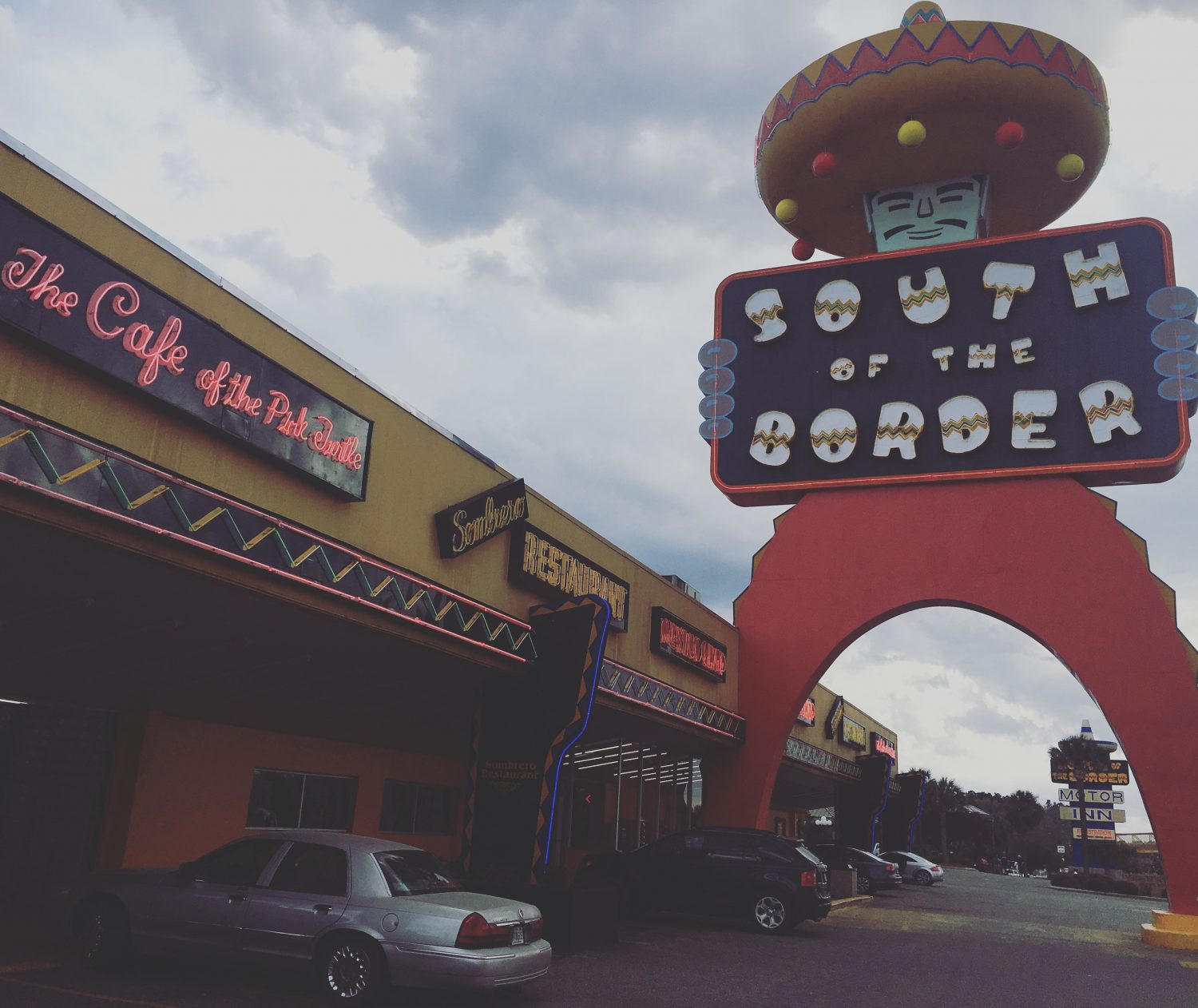 Since we got another early start on Tuesday — seeing a theme here? — and we only had four hours of driving to DC, we were back before noon. My friend headed north to Pennsylvania and I took one of the most glorious naps ever. After the kitties gave me all the attention they needed to after I’d been gone for a week. 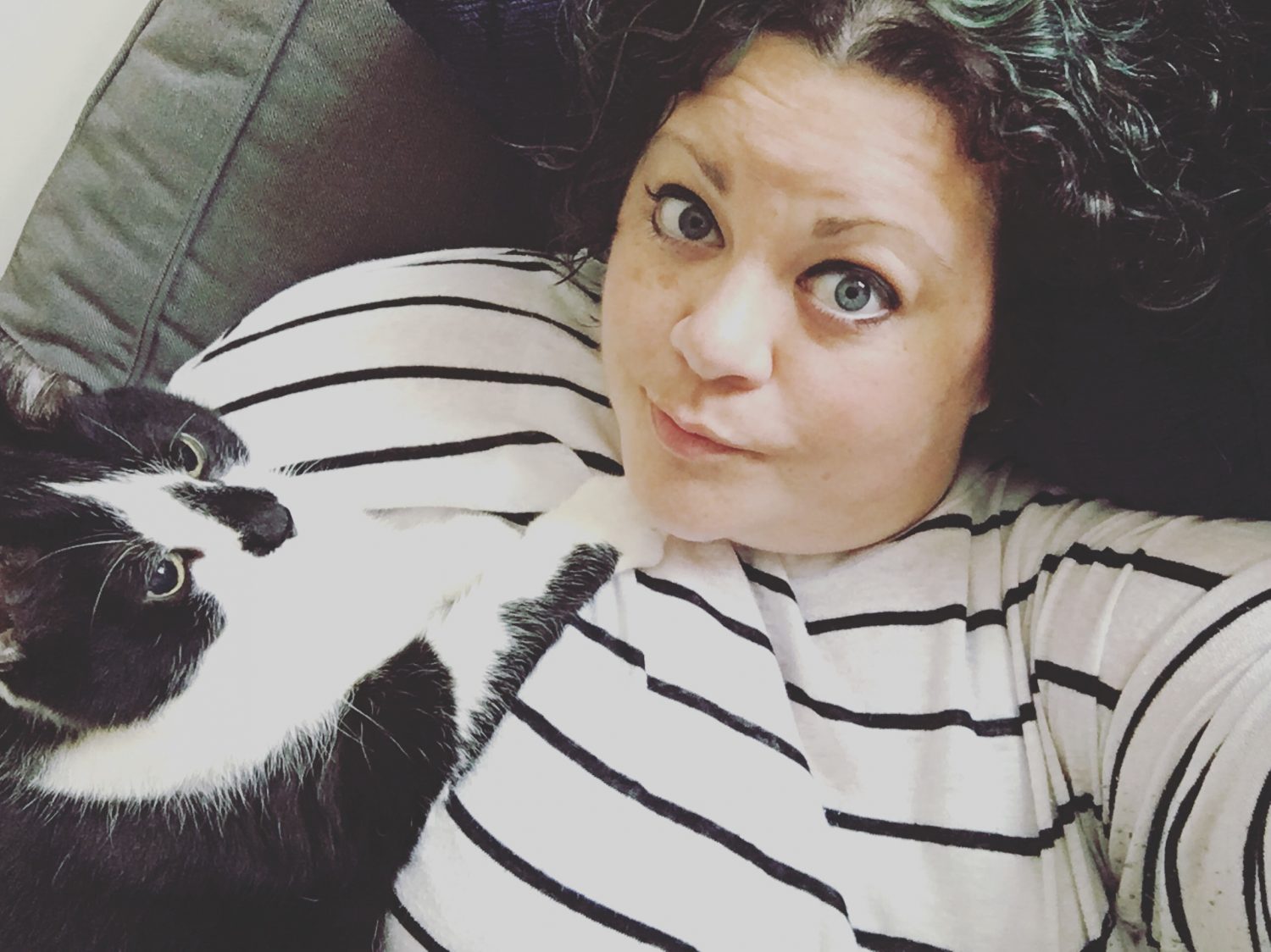 I had an amazing time at Apollycon. MAJOR shout out to Steph (of No BS Book Reviews) and Hannah (of The Irish Banana Review) for putting on an incredible event. It was, without a doubt, one of the best events I’ve ever attended. They had an amazing group of volunteers — I was one — and everyone worked really, really hard to pull this off… but we had a great time while doing it. I’d volunteer again to work an event coordinated by these ladies in a heartbeat. (And I already have for DC in 2018.)

I also enjoyed my time NOT at the official events while in Orlando. It was nice to get out in the sunshine and spend time with friends. I always go back to the “real world” a little sad because it doesn’t compare to “book world” but when you add in the Florida sunshine it was even tougher to go back this time. I’m so glad I decided to make the trek to Orlando. Almost two weeks later, I still have a “book world” hangover but I also have a thousand little memories to hold me off until the next time.

Have you ever attended Apollycon?
Will I see in you in DC in 2018?